North Korea’s ICBM Test is a Win for Iran 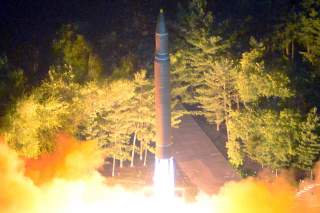 North Korea’s recent test of an intercontinental ballistic missile is a game changer. Only last month, Secretary of Defense James Mattis told Congress that the despotic nation was the “most urgent and dangerous threat to peace and security.” Kim Jong-un’s new missile launch confirms Secretary Mattis’s assessment. Perhaps even more concerning is the potential for North Korea to compound the threat by transferring this dangerous technology to another rogue regime, namely its longtime ally Iran.

Tehran checks every box for being a global menace, just like its friends in the Democratic People’s Republic of Korea (DPRK). Both are state sponsors of terror, have clear nuclear ambitions, and directly threaten U.S. interests and those of our allies with ballistic missiles. Iran looks to North Korea to support and enable its nuclear ambitions. For years, experts have suspected North Korea as being the key supporter behind Iran’s missile and nuclear programs. Today, many of the missiles Iran would use to target American forces in the Middle East are copies of North Korean designs.

North Korean engineers are in Iran helping to improve its missiles to carry nuclear warheads, according to a report released last month from Iran’s main opposition movement—the same movement that exposed Tehran’s secret nuclear facilities at Natanz and Arak in 2002. According to the National Council of Resistance of Iran’s new report, the Islamic Republic is using North Korean blueprints to build underground missile sites and experts are regularly traveling between the two countries to assist the Iranian Revolutionary Guard Corps’ efforts to develop nuclear warheads and guidance systems. This would enable the jihadist state to launch nuclear weapons at the large U.S. bases in the Middle East that restrain Iran’s expansionist ambitions.

Fortunately, Iran is still behind the DPRK in acquiring a nuclear device. But like the ill-fated 1994 agreement with North Korea to halt its nuclear program, the nuclear deal President Barack Obama signed with Iran in 2015 is destined to fail. Once it does, Iran will be able to quickly mount nukes on its massive arsenal of ballistic missiles thanks to North Korean assistance that has occurred since the deal was signed. This time, Iran’s missiles will be better protected because North Korea has helped it build as many as thirteen secret underground launch facilities modeled after their own.

Pyongyang’s ICBM tests in July make these revelations far more worrying. The missile tested last week exceeded most analysts’ expectations, demonstrating an ability that could put American cities as far as Chicago within Kim’s nuclear crosshairs. This is astonishing given many experts said as recently as May that North Korea would not have a working ICBM until 2020. Unfortunately for the world, they were wrong. With North Korea outpacing our own expert expectations, Iran will likely not be far behind.

According to the Pentagon, North Korea already gave Iran an intermediate-range missile known as the Musudan in 2005, which Iran tested earlier this year. The DPRK used the same missile to develop their new ICBM. Tehran will likely follow the same path to an ICBM—except with their North Korean friends providing tips to accelerate their program. When Iran reaches this threshold, the IRGC will be able to extend its threats beyond the Middle East and deep into Western Europe to endanger our NATO allies. At that point we will have evil regimes pointing nuclear capable missiles at us from both the east and west. The prospects look dire, but we can still prevent this.

During the Cold War, the world came to the brink of nuclear war when the Soviets placed nuclear missiles on our doorstep in Cuba. The United States stood up to Moscow’s challenge, and the Soviets backed down. Now with Little Kim building missiles that can target American cities and with Iran following his footsteps, we must again find our courage and stare down these thugs. How do we do that?

We can start by re-designating North Korea as a State Sponsor of Terror. I introduced H.R. 479 earlier this year to require the State Department to review and report to Congress whether Pyongyang should be put back on the list. The bill passed the House 394 to 1 in April. I urge my colleagues in the Senate to move this bill to the president’s desk quickly in light of recent events. Pyongyang shows no sign of slowing its missile program, and with their known assistance to the terrorist sponsors in Iran, the ICBM threat to America may soon grow another head.

Next, we must demonstrate to Iran that acquiring ICBMs is a costly and foolish endeavor by imposing even tougher sanctions on North Korea in response to their ICBM test. This should include sanctions targeting the myriad Chinese, Iranian, and other banks and companies that act as a lifeline for the Kim regime. If these entities stopped funneling money to North Korea, up to 40 percent of the regime’s revenues would be eliminated. The world must decide: either choose the American financial system or North Korea. There is simply no middle ground.

Little Kim must be held accountable for his saber rattling. If he is allowed to threaten American cities with impunity, then there will be little to stop Iran from doing the same in the near future. The United States and our allies must sever their alliance and restore a world order where the despots fear our reach, not the other way around. And that’s just the way it is.

Congressman Ted Poe is a senior member of the Foreign Affairs Committee and serves as chairman of the Subcommittee on Terrorism, Nonproliferation and Trade.

Image: Intercontinental ballistic missile (ICBM) Hwasong-14 is pictured during its second test-fire in this undated picture provided by KCNA in Pyongyang on July 29, 2017. KCNA via Reuters.