North Korea's Next Move (That Could Start a War): An Atmospheric Nuclear Test? 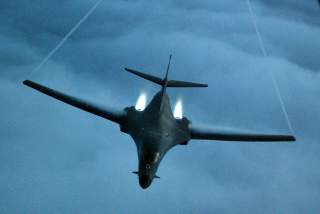 Editor's Note: In our latest interview (please like our Facebook page to see more of these events) Harry Kazianis, Director of Defense studies at the Center for the National Interest, and Daniel L. Davis, senior fellow for Defense Priorities, discuss North Korea’s latest missile developments.

Danny Davis recently wrote an article on how America may be able to avoid war with North Korea. An excerpt of the article can be found below:

For logical and traceable reasons, the chances of war on the Korean peninsula have moved beyond “possible” and now solidly into “likely” territory. The combined actions, decisions, and positions of Presidents George W. Bush, Obama, and Trump, along with North Korean dictators Kim Il-sung, Kim Jong-il and Kim Jong-un, have perversely created a no-win situation in which war may now be unavoidable––a tragic and avoidable situation for which hundreds of thousands or millions of Americans, South Koreas, and Japanese may pay with their lives.

With the adoption of a rational policy, however, American security can be assured, and war avoided.

The seeds of today’s crisis were planted in October 1994 when newly installed North Korean dictator Kim Jong-il signed the Agreed Framework with the Clinton Administration. North Korea pledged to cease construction of nuclear reactors suspected of fueling a nuclear weapons program in exchange for the U.S. funding two light-water reactors that could not be used to produce material for a nuclear bomb. Inspectors from the International Atomic Energy Agency (IAEA) were required to certify North Korea’s implementation.

Kim initially complied with the agreement and in 1997 met with representatives of South Korea and the U.S., continuing what Secretary of State Madeline Albright termed “this historic process.”  Soon thereafter, however, evidence began to accumulate that Pyongyang was secretly establishing a weapons program and impeding IAEA inspectors. Even Clinton’s patience started to run out, and in March 2000 he reported to Congress that he could not certify North Korea was not violating the Agreed Framework by secretly pursuing a weapons program.

President Bush, with the encouragement of then-Undersecretary of State John Bolton, called out North Korea as a member of the “axis of evil” in his 2002 State of the Union address, adding to Kim’s paranoia of U.S. attack. In part citing this declaration, North Korea officially withdrew from the Nuclear Nonproliferation Treaty (NPT) in January 2003 and kicked out IAEA inspectors. Free from the NPT and IAEA inspections, Kim Jong-il accelerated the development of his clandestine nuclear program. In October 2006 North Korea conducted the first of what has thus far been six underground nuclear tests.

In March of 2011, President Obama made a crucial decision that today makes any diplomatic solution with the Kim regime almost impossible to attain. In an attempt to “prevent a humanitarian catastrophe” in Libya, Obama authorized the U.S. military to join with other nations in bombing regime forces. Seven months later, Libyan dictator Muammar Kaddafi was driven from power and was brutally and publicly murdered by frenzied crowds. More than any other single event, Kaddafi’s death has convinced current North Korean dictator Kim Jong-un that negotiating away his nuclear weapons is a virtual death sentence.

In December 2003, Bush had negotiated with Kaddafi to end and verifiably dismantle his nuclear weapon’s program. "Colonel Kaddafi's commitment, once it is fulfilled,” Bush boasted at the time, “will make our country more safe and the world more peaceful." That commitment was fulfilled in 2009. Two years later, however, when Obama was the President, and Kaddafi had no nuclear weapons to defend himself, he was powerless to stop the allied air assault and lost his life. A powerful lesson was imprinted on the mind of Kim Jong-un: don’t trust American diplomacy.