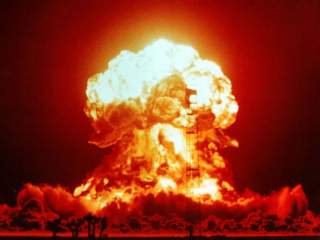 Pandora’s box is open: North Korea possesses nuclear knowledge, and isn’t shy to show off the rewards of its scientific efforts, including its latest unveiling of an alleged miniaturized nuclear bomb. But is it possible to put North Korean nuclear expertise back in the box and convince the capricious regime to denuclearize?  Recently, the international community has given a renewed effort to doing just that.

Diplomats are fixated on the “complete, verifiable and irreversible denuclearization” of North Korea’s nuclear program. This concept, known as CVID, has been the goal of the international community for the North Korean nuclear program, dating back to the Six-Party Talks of the early 2000s. Many experts define CVID to mean that North Korea must relinquish all nuclear weapons (complete); submit to international nuclear monitoring, as nearly all states do (verifiable); and that it must be difficult for North Korea to rebuild its nuclear weapons program undetected (irreversible).

Language calling for CVID is present in all five UN Security Council Resolutions on North Korean nuclear proliferation since 2006. It is also present in new legislation enacted by the United States in February 2016, which stipulates that no sanctions on Pyongyang will be lifted until the state “has made significant progress toward” CVID, among other requirements.

For years, the United States has insisted that to return to negotiations, Pyongyang must first take steps towards CVID. This requirement is problematic for two reasons: First, it is counterproductive to set the goal of negotiations as a precondition to talks. Second, it’s likely that the North Korean nuclear program is inherently not reversible. The latest Security Council resolution, however, takes a stab at countering this issue of irreversibility.

North Korea has relied on international assistance, whether through official or illicit channels, to train its scientists. Security Council Resolution 2270, unanimously adopted on March 2, 2016 following North Korea’s fourth nuclear test and a second satellite launch using ballistic missile technology, includes a ban on providing sensitive nuclear-related training to North Korean scientists. This ban will limit North Korea’s nuclear potential by denying it that assistance. Furthermore, if North Korea were to submit to international demands for CVID, such a ban would thereby impede North Korea’s ability to reconstitute its nuclear program in the future.

According to Paragraph 17 of the resolution, the Security Council “Decides that all Member States shall prevent specialized teaching or training of DPRK nationals within their territories or by their nationals of disciplines which could contribute to the DPRK’s proliferation sensitive nuclear activities or the development of nuclear weapon delivery systems, including teaching or training in advanced physics, advanced computer simulation and related computer sciences, geospatial navigation, nuclear engineering, aerospace engineering, aeronautical engineering and related disciplines…”

By restricting Pyongyang’s access to sensitive technical knowledge, the international community is taking action to dampen North Korea’s nuclear weapons progress into the future. This is a positive step. But North Korean scientists will continue to train their future generations, and the reality is that North Korea’s nuclear knowledge cannot be eradicated. Fissile material production, nuclear device design and ballistic missile development are part of Pyongyang’s scientific portfolio for now, and irreversibly so. By limiting Pyongyang’s access to more advanced technologies that facilitate quicker and more efficient nuclear progress, new sanctions provide an expanded but still passive approach to this issue, waiting for the decay of the North Korean nuclear industry. A better solution, however, would be proactive diplomatic engagement in tandem with these new nonproliferation measures.

A fully and permanently denuclearized Korean peninsula is an admirable goal, but this desire for CVID should be tempered with the understanding that technological advancement may not be reversible; true irreversibility may well be unattainable. In the near term, the best that the international community may be able to accomplish is to prevent North Korea from gaining additional technical knowledge or acquiring materials for its weapons program by enforcing Security Council sanctions. The long-term goal should be to welcome North Korea back to the nonproliferation regime and address its security concerns, thereby eliminating its impulse to possess nuclear weapons in the first place.

Elizabeth Philipp is the Herbert Scoville Jr. Peace Fellow at the Arms Control Association. She is an alumna of Fulbright Korea and the University of Illinois at Urbana-Champaign.