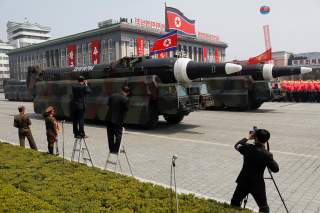 North Korea has tested a new intercontinental ballistic missile that could hit the continental United States.

Combined with Pyongyang’s miniaturized nuclear warheads—which many analysts believe North Korea already possesses—Kim Jong-Un’s regime now has the ability to unleash nuclear Armageddon on the American homeland. That means America’s policymakers must make a decision—either live with a nuclear-armed North Korea or launch a military response. There is little prospect of coaxing North Korea to give up its nuclear weapons program.

“The U.S. Department of Defense detected and tracked a single North Korea missile launch today at about 10:41 a.m. EDT.  We assess that this missile was an intercontinental ballistic missile, as had been expected,” Pentagon spokesman Capt. Jeff Davis said in a statement. “The missile was launched from Mupyong-ni and traveled about 1000 km before splashing down in the Sea of Japan.  We are working with our interagency partners on a more detailed assessment.”

“During the call Dunford and Harris expressed the ironclad commitment to the U.S.-Republic of Korea alliance.  The three leaders also discussed military response options.  Harris joined Dunford in his Pentagon office to make the phone call.”

According to David Wright, Union of Concerned Scientist’s senior scientist and co-director of the Global Security Program, the North Korean weapon could easily hit the United States.

“It appears the ground range of the test was around 1,000 km, which put it in or close to Japanese territorial waters. Reports also say the maximum altitude of the launch was 3,700 km (2,300 miles) with a flight time of about 47 minutes,” Wright wrote.

“If those numbers are correct, flown on a standard trajectory the missile would have a range 10,400 km (6,500 miles), not taking into account the rotation of the Earth.”

Indeed, by Wright’s calculation, most of America’s largest cities are well within the range of the North Korean missile. However, Washington D.C. is probably just outside of Pyongyang’s reach. “Los Angeles, Denver, Chicago appear to be well within range of this missile, and that Boston and New York may be just within range,” Wright wrote.

“Washington DC may be just out of range.”

The one caveat is that it is not known what the North Korean missile was carrying in terms of payload. It is possible that the weapon’s operational range is shorter.

“It is important to keep in mind that we do not know what payload the missile carried on this test,” Wright wrote.

“If it was lighter than the actual warhead the missile would carry, the ranges would be shorter than those estimated above.”

While there is some doubt as to whether the North Koreans have a miniaturized warhead that can fit atop their ICBM, Jeffrey Lewis, Director of the East Asia Nonproliferation Program at the James Martin Center for Nonproliferation Studies at the Middlebury Institute of International Studies at Monterey, said that Pyongyang claims to have tested such a device last September.

“They claim they tested it in September.  I believe them,” Lewis wrote in a Tweet.

The problem for the United States is further compounded by the fact that there is nothing in the Pentagon’s inventory that can shoot down an ICBM flying on this particular trajectory.

“We don't have anything that could engage that class of target on that trajectory,” Lewis noted.

U.S. Army chief of staff Gen. Mark A. Milley told an audience at the National Press Club in Washington yesterday that the United States faces an imminent choice on what it must do to address the North Korean problem. Milley noted that none of the options facing Washington are good because Pyongyang’s nuclear weapons and ICBM programs are advancing faster than even the most pessimistic projections.

Lewis noted that the only realistic policy option for the United States is to “be deterred”—though the Pentagon is contemplating a military response. If the situation on the Korean peninsula devolves into open warfare, the United States and South Korea would undoubtedly destroy North Korea’s military. But the cost would be extremely high—particularly for the civilian population in Seoul and other large cities in the region.

“A war on the Korean peninsula would be terrible,” Milley said.

“However a nuclear weapon detonating over Los Angeles would be terrible.”

Ultimately, there is little Washington can do other than to live with a nuclear-armed North Korea. Pyongyang has little incentive to give up what it sees as its trump card to ensure the survival of the Kim regime.

Indeed, when the United States helped to overthrow Muammar Gaddafi in 2011 after the Libyan dictator had agreed to give up his weapons of mass destruction, Pyongyang became even more determined to hold onto its nuclear weapons. Essentially, North Korea made the simple realist calculus that a weapon that might deter the United States and preserve the regime trumps any economic or diplomatic benefit such as a security guarantee.

It is likely—unless President Donald Trump is willing to launch a preemptive strike on North Korea—that the United States will just have to adjust to the reality of a nuclear-armed Pyongyang. Such a move would not be unprecedented. While the United States used to state prior to August 1949 that a nuclear-armed Soviet Union was unacceptable, subsequent to Moscow acquiring an atomic bomb, Washington quickly learned to accommodate the Kremlin.