North Korea's Nukes Will Only Go If Kim Gets to Stay 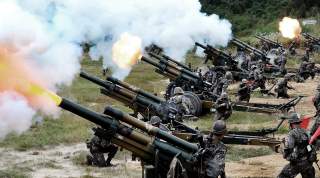 The price is steep, but the alternatives are worse. North Korea has already conducted five nuclear-weapons tests, and on July 4 tested a missile with enough energy to travel at least 5,500 kilometers, officially qualifying it as an intercontinental ballistic missile (ICBM). There is little reason to doubt that North Korea will sooner or later overcome the remaining technological hurdles in the way of its goal: the capability to reach a major U.S. city with a nuclear weapon small enough to be carried by a missile, but rugged enough to survive the rigors of being blasted into space and reentering through the earth’s atmosphere.

Previous U.S. efforts to steer North Korea off this path—economic aid, multilateral negotiations, cyberattacks, relying on Chinese pressure—have clearly not been a match for Pyongyang’s overwhelming desire to possess that capability. North Korea’s nuclear and ballistic-missile progress have only accelerated in recent years. For decades, U.S. carrot-and-stick approaches have failed to recognize that for North Korea’s leaders, the capability to attack the United States with a nuclear weapon is the ultimate security against American efforts to overthrow them.

Other methods of convincing North Korea to give up its quest for a nuclear ICBM do not meet the feasibility test. A military strike to destroy North Korea’s nuclear and missile capabilities is clearly in this category. The United States would have no way of being certain that it knew the locations of all such facilities, and many of them are undoubtedly buried underground, where they would be extremely difficult to destroy. Even if all such facilities could be destroyed, moreover, the knowledge that made them possible would still exist in the heads of North Korean scientists and engineers. It would be only a matter of time before North Korea was able to reconstitute its capabilities.

More importantly, the immediate consequences for the people of South Korea and possibly Japan could be devastating. The greater Seoul area, home to twenty-five million people, is within firing range of hundreds of North Korean artillery pieces and rocket launchers. Hundreds of North Korean ballistic missiles could reach other parts of South Korea or, if Pyongyang wished, Japan. Aside from killing and injuring thousands, such attacks could create a humanitarian crisis of unprecedented scale.

Stiffer economic sanctions are equally unfeasible. United Nations and U.S. economic sanctions have had little effect. The only country with significant economic leverage over North Korea is China. Ninety percent of North Korea’s imports are from China, and 85 percent of its exports go to China. Despite declarations that it wishes to see a denuclearized North Korea, however, Beijing to date has imposed only moderate economic pressure on the country. The reason is that China more fully appreciates Pyongyang’s nuclear motives and the implications for China’s own interests.

Nuclear weapons have negligible military value to North Korea. Any nuclear attack on the United States or its allies would likely result in the annihilation of the North Korean state and its leadership. The nuclear threat has tremendous political value as a deterrent, however. Washington has made little secret of its desire to see regime change in North Korea. The United States and South Korea unquestionably could invade North Korea and overthrow its government—as the United States did in Iraq in 2003—provided they were willing to accept the human and material costs. An operational nuclear capability, however, particularly against the United States, would practically guarantee the security of North Korea’s rulers. Facing likely death anyway, North Korea’s rulers would have little incentive to hold back if invaded. Would Washington threaten the survival of a North Korean regime willing and able to do the same to a major American city?

China’s leaders believe that, for this reason, the Pyongyang regime is unlikely to willingly give up its quest for nuclear weapons and the ability to deliver them against the United States, no matter how much pressure it endures. Chinese pressure could, however, eventually provoke a coup or popular uprising in North Korea. That, in turn, could result in a civil war or breakdown of governance, likely sending millions of refugees flooding into China, and possibly even drawing China into an armed conflict in Korea.

Moreover, the collapse or overthrow of the North Korean government would likely result in North Korea eventually being absorbed into its prosperous southern neighbor, just as East Germany was absorbed into the Federal Republic of Germany in the west. The resultant expansion of the Republic of Korea to include the entire Korean Peninsula would result in a democratic nation and U.S. ally sitting right on China’s doorstep. Thus, although everything else being equal, China’s leadership would probably rather North Korea did not have nuclear weapons, it is clear from their behavior that they would rather North Korea have nuclear weapons than see it collapse.

These insights provide the key to a possible resolution of the crisis: trading North Korea’s nuclear weapons for a promise to let the regime survive. There is no denying that assuring the survival of the Kim dynasty is both difficult and distasteful. The ruling regime in North Korea is truly evil. North Korea’s leaders enjoyed lives of luxury while allowing an estimated 15 percent of their population to starve to death during the 1990s. Even today, the ordinary people in North Korea suffer from extreme impoverishment, and are subject to arbitrary execution or imprisonment, forced to labor as slaves in a vast gulag of prison camps.

Of course, those rulers would rather assure their survival with a nuclear arsenal than with a treaty. That is why they would have to be threatened with severe economic consequences if they did not accept the deal—consequences that only China has the capability to impose. To overcome China’s likely reluctance to make such threats, the United States would have to make clear to China that, if it did not do so, Washington would be compelled to impose so-called “secondary sanctions” on all Chinese entities doing business with North Korea. Such sanctions, particularly in the financial sector, have proven to be highly effective when applied to countries such as Iran, and would be highly costly for China. In addition, President Trump has indicated that his willingness to tolerate China’s massive trade imbalance with the United States is contingent on China’s willingness to apply pressure on North Korea. Of course, as always when dealing with China, it would be best if the consequences of not cooperating were communicated discreetly and privately.

There is one more country whose interests need to be considered: South Korea. Given the tragedy of a divided nation and the suffering of their compatriots in the North, it would be politically difficult for any South Korean government to formally commit to the indefinite partition of the Korean Peninsula. Nonetheless, the South Korean government knows that the sudden absorption of North Korea would be hugely costly and painful, much more so than the reunification of Germany. There were nearly four West Germans for every East German at reunification, but currently only two South Koreans for every North Korean. And North Korea is vastly more impoverished than East Germany ever was.

It would be in South Korea’s interests, therefore, for North Korea to first reform and open up its economy for some decades before unifying with the South. North Korea has already begun experimenting with economic reform, though those efforts to date have been limited and halting. It is possible, however, that with assurances that the United States and South Korea will not overthrow them, North Korea’s rulers will have enough confidence in their security to allow more extensive economic reforms. This was the experience in China, where the normalization of relations with the United States gave Deng Xiaoping the political legitimacy he needed to launch his economic reform program in the 1970s.

Such follow-on consequences might be slow to develop and hard to predict in the aftermath of a treaty offering Beijing and Pyongyang assurances that the North Korean regime will be allowed to survive indefinitely. The security benefits to the United States and its allies, however, would be immediate: the complete and verifiable dismantling of North Korea’s nuclear and long-range missile programs.