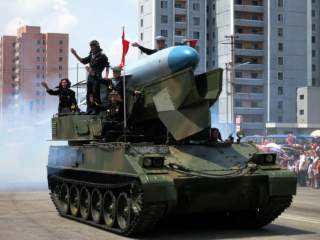 Our study’s bottom line on this key issue is quite simple. North Korea has been developing a warhead for a missile for thirty years, beginning in the late 1980s. We know this because U.S. intelligence observed conventional high-explosive tests intended for that purpose at its main nuclear facility. Pyongyang’s effort has also been helped by Pakistan—with assistance provided by A.Q. Khan during the 1990s. And data from its three nuclear tests since 2006 has almost certainly proved invaluable. In short, Pyongyang’s scientists would have to be totally incompetent if they had not succeeded by now at least in developing a warhead for medium-range missiles able to attack targets in Northeast Asia. My own personal experience having met periodically with them from 1996 until 2011 is just the opposite—they are highly competent and innovative. (Putting warheads on top of intercontinental ballistic missiles able to reach the United States is a greater technical challenge that—at least as of today—may be out of reach for the North.)

Just as disturbing as the likely growth of Pyongyang’s nuclear and missile forces is the reality that even without another nuclear or long-range rocket launch, the North will be a potent nuclear power five years from now. The barometer for most of the public and many observers of Pyongyang’s WMD programs has been whether it is testing or not. The alarm is sounded when the North detonates a nuclear test or launches a big rocket. When it does not, the threat appears to be low. The reality is that even without any more tests, North Korea could still produce enough material to build one hundred nuclear weapons—once again the worst-case scenario—and its current inventory of a thousand missiles is more than enough to launch them. However, one important consequence of no more testing is that the development of a real missile threat to the United States will be curtailed and limited almost entirely to striking Northeast Asian targets.

Even that prospect presents game-changing implications for the United States, its allies and the international community. Just a few examples; South Korea is currently fixated on preparing its own plan for a reunification “bonanza” (President Park’s words), but it is inconceivable that a North Korea armed with tens of nuclear weapons will want to reunite on any terms other than its own. On the military front, Washington’s joint plan with Seoul to defend South Korea in case of a war on the peninsula will have to be drastically revised to take into account the possibility that Pyongyang might actually use or threaten to use nuclear weapons to protect itself or to advance its war aims. On another front, a growing North Korean nuclear and missile threat could severely stress Washington’s ability to manage its alliances with South Korea and Japan—the main targets of that threat—and particularly to maintain the credibility of its pledge to defend them against all threats. Finally, the challenge to the international nonproliferation regime will become more severe as a Pyongyang, with a surplus of weapons, technology and know-how, may be more likely to look for customers abroad in order to earn hard currency. If it does, a key question will be: what could the international community do to punish a nuclear-armed North Korea? Its hard to come up with good options.

Overall, the prospect is grim, particularly since neither the United States, nor its allies, nor even China—the North’s closest friend—seem to know what to do about the growing threat except to hold innumerable diplomatic meetings and issue countless public statements calling for a resumption of the Six Party nuclear talks. Unfortunately, North Korea essentially ignores these statements.

Joel Wit is a Visiting Scholar at the U.S.-Korea Institute at SAIS and a Senior Research Fellow at Columbia University Weatherhead Institute for East Asian Studies.