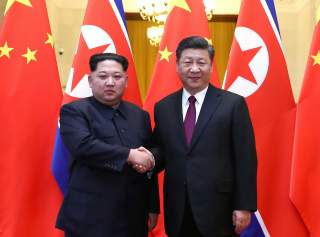 North Korean leader Kim Jong-un just met Chinese leader Xi Jinping. This comes on the cusp of Kim’s meetings with South Korean president Moon Jae-in in April and, possibly, U.S. president Donald Trump in May. Much of the initial analysis has focused on the importance of North Korea securing Chinese support in the upcoming talks, Beijing’s desire for an informal role in any evolving deal, or the novelty of Kim Jong-un travelling abroad. All of that is correct. But the meeting also just disproved a long-standing Chinese argument about why Beijing is not much to blame for North Korea’s behavior. And it tells Trump that his instincts to go to China about North Korea were right all along, and that the United States must still go through China if it wants a final deal that will really stick.

Western analysts have targeted China for years regarding North Korea. They have claimed that China has leverage, especially economic, over North Korea. As much as 90 percent of North Korea’s trade goes through China. North Korean elite money is held in Chinese banks and allows North Korea to buy internationally—whether parts for its nuclear and missile programs, or luxury goods for its elites. When North Korean elites want to travel, they pass through China. North Korea’s airline routinely flies to China, and a traveler can easily see, as I did when I flew from Beijing to Pyongyang, other travelers violating the UN luxury goods ban by walking straight from Beijing duty-free shops to their Pyongyang flight with bags of goodies. When President Trump assumed office, he correctly sensed this—that China was ultimately North Korea’s sponsor. He was criticized relentlessly for pandering to Xi to cut off the North, as was former South Korean president Park Geun-Hye who tried the same track.

In the end, neither effort worked, but that does not mean the approach was wrong. North Korea is not a satellite of China. It was never to China or the Soviet Union what East Germany was to Moscow. But it clearly cannot stand without at least China’s toleration and forbearance. It is China which allows sanctions leaky enough that Kim can buy off internal elites with foreign gifts like cars, booze and skis. It is China which waters down sanctions at the UN again and again and drags its feet with the panel of experts who enforce them. It is fear of China’s intervention which likely stayed Trump’s ‘fire and fury’ threats last year.

This is pretty obvious to anyone who spends much time on this issue. Kim Jong-un’s father rarely went abroad—but he did go to China. North Korea’s failed autarchic juche economy has been dependent on external inputs since the very beginning. But Beijing has always denied this. Again and again, from summits between Xi and Trump down to academic panels I have say on with Chinese officials, and everywhere in between, we have constantly been told that the West overestimates China’s ability to shape North Korean behavior.

If the Kim-Xi summit tells us anything, it is that this Chinese claim is what we always knew it to be—responsibility-evading flim-flam. When negotiations over the future of the Korean Peninsula got serious, as it appears this spring, the first thing Kim Jong-un did was run off to China to feel them out for his bargaining space. Kim does not like Xi. The Korean Central News Agency, North Korea’s foreign propaganda outlet, has been tough on Xi in the past. Kim has ignored Chinese envoys to North Korea. Kim, like most dictators, is uncomfortable leaving his country for very long. And Xi does not appear to care much for Kim. (Their summit picture is pretty uninspiring.) Yet when genuinely major issues of North Korean security are stake, the North felt it had to quickly heal the drift of the last few years and placate Xi with a trip to Beijing.

This is a smart move of course. North Korea really is dependent on Chinese goodwill. With John Bolton as the incoming U.S. National Security Advisor, the North would be wise to firm up Chinese backing. Bolton has a history of seeking strikes on North Korea. The vague threat of Chinese intervention in a U.S.–North Korean conflict will help deter the United States, to North Korea’s benefit. Similarly, South Korean president Moon has floated ideas about denuclearization and a possible peace deal. The Chinese will want to know the details, as they have long instrumentalized North Korea as a buffer against the United States in Asia.

In short, it is a mutually beneficial, patron-client relationship. North Korea gets Chinese protection and sanction-busting; China gets the buffer. And no matter the public Chinese denials of this relationship, it resurfaced immediately when the Chinese genuinely felt their interests to be in play.

Learning this definitely is progress. Even if this spring’s summitry falls through, we have now ascertained an important fact: the road to peace in Korea runs through Beijing. It has for twenty years. The Chinese just do not want to admit it, because they do not want the moral culpability for North Korea’s awfulness or the responsibility to actually do anything. But Kim Jong-un just proved this very point by taking that Beijing road himself. So the next time you hear the Chinese say that North Korea is really an American issue, remember that no less than Kim Jong-un just proved that they are lying.