Not Wanted: A Permanent U.S. Presence in Iraq 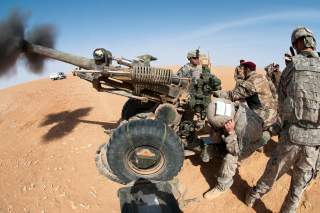 If the American people liked the Iraq War, then they will love a permanent U.S. military presence in that dysfunctional state. Apparently, the Trump administration is considering that possibility.

Gen. Joseph Dunford, chairman of the Joint Chiefs of Staff, said during a February 23 interview at the Brookings Institution in Washington, DC: “We have, as has NATO, begun a dialogue about a long-term commitment to grow the capacity, maintain the capacity of Iraqi Security Forces, but no decisions have yet been made yet.” Doing so would be an awful start for President Donald Trump.

Defense Secretary James Mattis suggested the triumph of hope over experience when he declared that “the Iraqi people, the Iraqi military and the Iraqi political leadership recognize what they’re up against and the value of the coalition and the partnership, in particular with the United States.” He added: “I imagine we’ll be in this fight for a while and we’ll stand by each other.”

Actually, it would be hard for Iraq to stand by America, since the Iraqi state has been in crisis for years. Moreover, the mere possibility of Washington, DC taking on a permanent role in Iraq is a dramatic acknowledgement of past failure.

The United States first turned that nation into a military target almost twenty-six years ago after the Iraqi invasion of Kuwait. But Washington left Saddam Hussein in power. In 2003, the Bush administration invaded to oust him. American officials imagined the Iraqi people would warmly welcome their new overlords as the latter “drained the swamp,” created a pro-Western satellite, established permanent military bases and placed American-paid expatriates at the head of the new government. Iraq would become yet another military outpost enforcing U.S. military hegemony.

It didn’t work out that way. The occupation’s mistakes were many and major. Noted the Special Inspector General for Iraq Reconstruction: “The security challenges associated with post-war rehabilitation went far beyond the wave of looting that immediately followed Saddam’s fall. They were seeded by long-standing sectarian and ethnic differences, the democratic ascent of Iraq’s majority Shia population, and a Sunni-fomented insurgency.” Sectarian conflict erupted killing hundreds of thousands and displacing millions of Iraqis.

It isn’t obvious that anything could have prevented the rise of sectarian governance and war. The quaint belief that under American tutelage ethnic, political and religious conflicts would fade away and Iraqis would come together to sing Kumbaya always was a fantasy. And despite the gratitude Iraqis were supposed to feel for their liberation, the Baghdad government refused to grant American soldiers immunity as part of a status-of-forces agreement, necessary for a continuing occupation.

In fact, an ongoing U.S. military presence would not have solved Iraq’s problems; rather, American troops would have been targets for radical Shia and Sunnis alike. While Republicans blamed Barack Obama for abandoning Iraq, it was the Iraqis who said no. President Obama only followed Republican George W. Bush’s withdrawal schedule.

There’s no reason to believe that renewed U.S. involvement will create an honest, effective, nonsectarian government. Nor to think that ongoing payments and training will create a dramatically better and more competent military and other security forces. We’ve already seen the movie and the ending was the Islamic State taking over Anbar, Fallujah, Mosul, Ramadi and much more. In some cases, the Iraqi forces refused to fight. That’s not going to change if Washington sticks around longer.

It’s not as if the United States hasn’t tried to develop a capable, serious Iraqi military. The Bush and Obama administrations devoted more than $25 billion to the task. The money went to construct and renovate bases, train troops, provide logistical support, assist the police, provide supplies, create a counterterrorism force and more. The programs were many and expensive.

Baghdad also spent generously on the best American weapons—including F-16 fighters, which proved of no practical use defending against ISIS—many of which ended up in insurgent hands. Ironically, the United States unintentionally became the chief armorer of the Islamic State. But no matter, explained Leah Schulz of the Security Assistance Monitor: “Following the collapse of Iraq’s fighting force, the United States is again trying to train and equip the Iraqi military to effectively defeat a terrorist group.”

The State Department has expressed its charming commitment “to helping Iraq improve security, maintain sovereignty, and push back against terrorism, most recently ISIL.” But the principle problem in Iraq is lack of motivation, not inadequate U.S. support.

Indeed, the Baghdad government has failed systematically even when facing a brutal existential threat. Last year, the Washington Post reported on an Iraqi colonel who “confided that his battle against the Islamic State too often felt like a suicide mission,” despite generous American aid. To defend Fallujah against an advance by the Islamic State, he “had requested a U.S.-supplied M1 Abrams tank but said he was asked to pay $2,000 in bribes to secure it. Instead, he was given a run-down Russian one, which arrived without a driver trained to use it.”

Is the Iraqi military better in 2017 than 2014, when entire Iraq units melted away in the face of remarkably small ISIS forces? Perhaps, but that isn’t much of a standard. Lt. Gen. Sean MacFarland, commander of the coalition against ISIS in Syria and Iraq, asked “Are they better than the enemy? Yes they are.” That isn’t so clear, however. Baghdad has been relying heavily on elite counterterrorism forces, which cannot carry the entire war’s burden. Moreover, Iraqi forces are winning only with U.S. backing, including air support, as well as cooperation with sectarian militias, particularly those loyal to Iran. Is this a secure basis for Iraq’s future defense?

And whatever the improvements, serious challenges with the security forces remain. The military’s leadership still is political, a factor which undermined the effectiveness of Iraqi forces when ISIS first struck. “The promotion of poorly qualified leaders is the army’s biggest problem” in the view of some Iraqis, noted the Washington Post. Moreover, corruption, like that determining which unit got which tank, remains a significant factor, degrading the military’s effectiveness.

Worse, the sectarian political crisis continues. Iraq’s government remains Shia-dominated and therefore is distrusted by minority Sunnis. After choosing seventh-century brutes over twenty-first century sectarians three years ago, the horrors of ISIS rule caused many Sunnis to back away from the Islamic State. Absent reform, however, they could switch again if they find another group willing to act as their supposed protectors against an abusive central government and sectarian security forces.

Indeed, post-liberation killings, especially by Baghdad’s militia allies, have accompanied Iraq’s recent victories. These abuses undermine the prospect of reconciliation in Iraq and taint Washington’s reputation as well. Yet the problem could grow in the future. Warned the Washington Post: “If and when the Islamic State is defeated, there is no fully developed plan for how these armed groups can be brought under state control and prevented from exacerbating the sectarian divisions that brought about the militant group’s rise.” If Sunnis are not included in their nation’s future, another sectarian war looms on the horizon.

Ultimately, only the Iraqis can make their nation. The United States has done more than enough to equip them to defeat the Islamic State. Washington should begin turning that task back over to the Iraqi people. They must take the next step and adopt the political reforms necessary to drain away popular support from radical Islamists of all stripes. Washington can’t do that. In fact, U.S. support makes it easier for Baghdad to put off needed reforms.

During his presidential campaign, Donald Trump claimed to be different than Hillary Clinton. He criticized her support for both wars fought and the wars she wanted to fight. As president he should be withdrawing America from the third Iraq war, not planning permanent U.S. involvement.