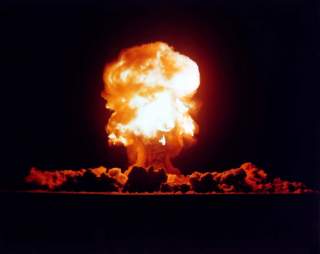 This has prompted arms-control skeptics to question whether being a signatory to the agreement is in the security interests of the United States; others have called for abrogating the treaty outright. While Russia’s actions are serious and merit a firm U.S. response, it is important to distinguish between testing a banned cruise missile and moving to deploy it. Until that happens, the United States should focus its diplomatic energy on bringing Russia back into compliance with the treaty. The Obama administration has thus far responded proportionately by making this violation public in its annual report to Congress on arms control compliance and by expressing its serious concerns to the Russian government. The United States should also immediately exercise its right to call for a special meeting of the INF Treaty’s Special Verification Commission, which last met in 2003.

While perhaps emotionally satisfying given Putin’s pattern of irresponsible behavior, responding at this time to Russia’s violation by abrogating the INF Treaty and deploying U.S. intermediate-range missiles would not be in the national interest, for a number of reasons.

Pulling out of the INF Treaty at a time of heightened tensions between Russia and the United States would make cooperation on international-security issues a casualty of the current geopolitical tensions over Ukraine and other issues. Up until now, despite these growing tensions, Russia and the United States have managed to continue cooperating on nuclear-security issues, including implementing the New START treaty, negotiating with Iran over the future of its nuclear program, and destroying Syrian president Bashar al-Assad's declared chemical-weapons stockpile. Continued cooperation with Russia on these issues clearly is in the national-security interests of the United States.

From a broader perspective, taking rash action such as abrogating a long-standing treaty in the midst of the current geopolitical crisis would set a dangerous precedent of treating arms-control agreements and their verification measures —which are in the interests of the United States—as mere “chips” to consider playing during future political conflicts. Segregating decisions about continuing arms-control agreements from short-term responses to current crises should be a top U.S. priority. Withdrawing from the INF Treaty would undermine that objective. Indeed, in a letter to Russian president Vladimir Putin, President Obama wisely indicated the United States’ desire to preserve the treaty and to discuss steps Moscow needs to take to return to compliance.

Because of growing U.S.-Russian tensions, bilateral arms-control agreements such as the INF and New START treaties are more important than ever. The stability and transparency that these agreements create can help deescalate and diffuse more serious crises if they emerge. They also provide a secure line of communication between the U.S. and Russian militaries—a connection that will grow more important if the political lines of communication deteriorate. Retaliating harshly over Russia's INF Treaty violation could prompt Russia to suspend New START's verification regime, denying the United States critical information about Russia's nuclear-modernization efforts and damaging reliable communications between both countries.

While the United States homeland may not be directly threatened by intermediate-range Russian missiles, the territories of its NATO and East Asian allies would be, as would be our forces forward deployed in Europe and Asia. And while those same allies would surely like to avoid Russian intermediate-range missiles aimed at them, their willingness to allow the United States to respond by deploying its own intermediate-range missiles on their territories is far from certain. Missiles with ranges from 500 to 5,500 kilometers are of little use when deployed on U.S. soil. In contrast, Russia can deploy such missiles on its territory, within range of targets in the national territories of European NATO members, and in South Korea, Japan, and others. Given that U.S. deployment of its own intermediate-range missiles on allied territory would be complicated at best, the United States and its allies derive security benefits from keeping Russia within its INF Treaty obligations. Indeed, those calling for the United States to abrogate the INF Treaty in response to Russia’s noncompliance should consider whether doing so would simply play into Putin’s “long game” of disrupting Western unity in confronting Russian adventurism.

The president also needs to engage with Congress fully explain the Administration’s plans for responding to Russia’s violation of the INF Treaty and to affirm the importance of arms control to the national security of the United States and our allies. He should also urge Congress to move forward in confirming nuclear-weapons officials key to addressing noncompliance effectively and proactively, including Assistant Secretary of State-designate Frank Rose, who was nominated to head the Bureau of Arms Control, Verification, and Compliance over a year ago.
Moving forward, it will remain in the interest of the United States and Russia—and the international community at large—for Washington and Moscow to avoid allowing their deteriorating relations to disrupt cooperation on global nonproliferation and other international-security issues. It is with this objective in mind that the United States should consider and carefully calibrate its response to Russia's noncompliance with the INF Treaty to restore the integrity of treaties that are in the national-security interest of the United States.