Now Is Not the Time for a Referendum on Taiwanese Independence 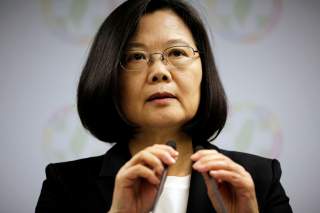 Led by Formosa TV (FTV) chairman Kuo Pei-hung’s Formosa Alliance, pro-independence advocates in Taiwan have recently sparked controversy with a call for a referendum on whether the democratic island-nation should declare de jure independence. Deeply unsatisfied with what they regard as President Tsai Ing-wen’s far too cautious, if not “concessionary,” approach to China, the Alliance, along with like-minded members within Taiwan’s deep-green camp, is likely to field its own candidate in next January’s general elections and has pressured Tsai’s Democratic Progressive Party (DPP) to select someone else for the race.

Through their calls for a more muscular response to Chinese encroachment and for a referendum on sovereignty, the Alliance has attracted firm responses from a number of American academics (among them Richard Bush of the Brookings Institution) as well as the American Institute in Taiwan (AIT), the United States’ de facto embassy in the absence of official diplomatic ties—and those responses have been highly unfavorable to the referendum cause. In both cases, the principal source of concern is the belief that a unilateral change to the “status quo” in the Taiwan Strait, such as could occur should a referendum be passed, would be both potentially destabilizing and contravene the United States’ longstanding “one China” policy.

Taiwan’s Ministry of Foreign Affairs (MOFA) has also indicated it would deal “carefully” with the referendum issue, adding that “as a responsible government, the administration has to take into consideration Taiwan's role in maintaining peace and stability in the region.” Revisions to referendum laws enacted by the Tsai administration, which have lowered the thresholds for the initiation and passage of referenda, have strategically left out plebiscites on constitutional change and anything that touches on the Republic of China’s (Taiwan’s official designation) sovereignty.

Bush and others, myself included, also maintain that President Tsai’s responsible handling of Taiwan’s always difficult relationship with Beijing has also been one of the key contributors to the United States’ willingness—and that of several others countries—to deepen its multifaceted, if unofficial, relationship with Taiwan. It follows that any move away from careful policymaking by Taipei, of the type that the Alliance has been advocating, would risk compromising the substantial progress that has occurred in U.S.-Taiwan bilateral ties, and possibly also undermine similar efforts with countries a number of important democracies and major economies.

The Alliance’s rather strident response to Bush’s commentary, published this week on the FTV-owned Dopost website, emphasized among other things the “right” of the Taiwanese, as citizens of a fellow democracy, to exercise their right to decide their own future. Along with the Alliance, referendum advocates and the deep-green camp have also made their case on the notion that the “status quo” has been shifting in Beijing’s favor and that a commitment to the “status quo,” which has been the Tsai administration’s official policy, is little more than euphemism for inaction. In their view, such a policy is naive and allows Beijing to bring the proverbial frog to a cooking point—that is, annexation.

The anxieties of the deep-green camp are perfectly understandable, for Beijing has indeed taken various actions in recent years, from modernizing its military to poaching Taiwan’s official diplomatic allies and restricting Taipei’s ability to participate in international multilateral organizations, that have constrained Taiwan. That being said, Beijing’s strategy hasn’t had a significant impact on Taiwan’s ability to exist, and to prosper, as a sovereign state. Moreover, while China’s rhetoric and actions aimed at Taiwan have been increasingly aggressive, President Tsai’s calm and responsible responses to those constant provocations have ensured that Taiwan maintains the moral high ground and has furthermore given the radicals in the Chinese Communist Party (CCP) and the People’s Liberation Army (PLA) little, if any, ammunition to pressure Chinese leader Xi Jinping into adopting a much more hardline stance on Taiwan, one that conceivably could have serious repercussions on the nation’s sovereignty and ability to function.

In the meantime, Taiwan’s steady course of action has occurred in a time when the geopolitical context has been shifting, with China finding itself today in a much more precarious position internationally than it did just a few years ago. Besides its troubled relationship with the United States, China is now facing a backlash around the globe as democracies awaken to the realities of maintaining close relations with an authoritarian regime that is bent on rewriting the global rules of the game in a way that undermines the values that have underpinned the global order since the end of World War II. Pushback on companies like Huawei and the China Energy Fund Committee (CEFC), the closing of Confucius Institutes and efforts to identify and counter Chinese “sharp power” have spread across the world’s leading democracies since 2016, the year Tsai was elected, so much so that the era when Beijing could use its economic weight to buy our silence and insidiously wield its “sharp power” to corrode our democracies is probably over. China’s ability to get its way will become increasingly difficult, and not just with the world’s leading democracies and economic powerhouses: small and middle power, countries like the Czech Republic, Poland, Malaysia and others are learning to say “no” to China as their societies become more aware of the cost to their sovereignty and way of life of allowing China to dictate the terms of engagement. In many areas around the world, the backlash against China, and the rising awareness about the dangers of authoritarian corrosion both in government circles and within the public, have created many opportunities for greater involvement by Taiwan. Skepticism about China has, in many instances, been accompanied by a greater willingness on the part of various countries to reach out to Taiwan. And here again, the Tsai government’s strategy has been to do so quietly and constructively to avoid drawing too much attention to these developments and encourage retaliation by Beijing. Thus, while China has whittled away at some areas of Taiwan’s international presence, Taipei has implemented countervailing strategies that have bolstered its global engagement and ensured that the “status quo” remains a viable policy. As that trend continues, Taiwan buys more time, time which wise leadership can use to further deepen Taiwan’s connectivity in various areas internationally. (Admittedly, the Tsai government could do a better job of explaining its achievements on the international front to the Taiwanese public.)

One of the flaws in the Alliance’s argument for a referendum is the failure to recognize this unprecedented shift that has occurred in the global environment, one that imposes greater checks on Beijing’s ambitions and, at the same time, has created many new opportunities for Taiwan.

The Alliance and its allies among deep-green civic groups also fail to realize that foreign policy isn’t altruistic: in other words, U.S. policy on Taiwan isn’t about what is best for Taiwan, but rather what is in the U.S. interest. Taipei’s U.S. policy—and any country’s policy vis-à-vis one’s allies—is therefore to identify areas of commonality and shared interests, and to avoid decisions that are bound to derail the relationship. One could decry how “unfair” to the Taiwanese it is for U.S. officials and academics to state their opposition to a referendum on sovereignty, but that is besides the point: the maintenance of alliances necessitates compromises. Alienating Washington, DC as a referendum on sovereignty most assuredly would—and did, when Chen Shui-bian was in office—isn’t in Taiwan’s interest. (The Alliance’s tendency to launch personal attacks against whomever disagrees with its views, not to mention its own tendency to use disinformation to tarnish the reputation of Taiwanese officials, is also unlikely to win it allies at home and abroad.)

What referendum advocates also do not appear to have given sufficient consideration to is the fact that the proposed referendum could trigger Article 8 of China’s 2005 Anti-Secession Law and compel Beijing to take military action against Taiwan. Most certainly, the holding of such a referendum would also invite massive efforts by Beijing to influence the outcome of the referendum through “sharp power” and other means of interference, and would likely make substantial propaganda gains from an inconclusive—or failed—referendum bid, such as by using the results to “prove” that the Taiwanese do not favor independence.

Lastly, supporters of a referendum seem to assume that a successful plebiscite on the question would somehow strengthen Taiwan by changing the country’s official nomenclature—that is, relegating the ROC to the dustbin of history and replacing it with a Republic of Taiwan. These groups also tend to deeply resent the term “Republic of China,” which they regard as a “foreign” and “illegitimate” construct, as opposed to those who, like President Tsai, argue that Taiwan already is a sovereign—and now fully democratic—state whose official designation is, for the time being, the Republic of China. While no doubt gratifying for independence activists, there is absolutely no guarantee that a successful referendum would lead to the recognition of a new formally independent republic by the international community. In fact, recognition in the prevailing global context would be highly unlikely, and as a result Taiwan would find itself more, not less, isolated, and therefore more vulnerable to a likelier attack by the PLA. It is also almost certain that the international community would see the holding of a referendum on sovereignty as irresponsible risk-taking, which inevitably would have a reputational cost for Taiwan and undermine the gains, both bilateral and multilateral, it has made in recent years.