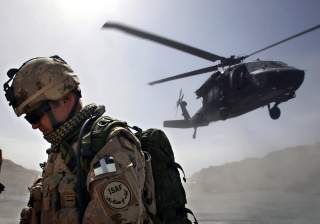 Negotiations may not secure even this. They could fail if the Taliban feel emboldened to try to win the war outright. They could fail if U.S. partners and the Afghan government feel so demoralized that the current order implodes, leaving the cities open to Taliban control. They could fail simply because the Afghan negotiators are unable to agree on a constitutional structure that enshrines this kind of decentralized politics. Failure on constitutional structure is a real risk, because the successful tools in other countries, like decentralization, federalism, proportional representation, and parliamentary government, are (for reasons I have never understood) anathema to most Afghan politicians.

They could also fail because of political wrangling among non-Taliban actors. President Ashraf Ghani’s term of office expires in May. There will not be an election before then. As a result, the government’s legitimacy will be diminished and hot presidential politics extended, making any intra-Afghan dialogue with the Taliban even more difficult. The Taliban will be tempted by Afghanistan’s history of terrible and divisive elections to see if they can further weaken the Afghan state and constitutional order just by waiting.

So far, there have been more bumps than road in the intra-Afghan process. An effort to convene an informal meeting of Afghans in Doha—each speaking in their “personal capacity” in a time-honored dodge to overcome challenges of recognizing the other side in a peace process—collapsed in mid-April amidst mutual recriminations, all with some merit. Ghani convened a consultative Loya Jirga to agree on a plan for negotiating with the Taliban at the end of April, but the effort to mobilize a traditional Afghan decision making forum fell flat from the beginning. A key organizer was the face of institutional fraud in the 2014 presidential elections, and most key opposition figures refused to attend, including former President Hamid Karzai, all of the current presidential candidates, and even Dr. Abdullah Abdullah, the Chief Executive Officer of Ghani’s government. (Though Abdullah’s giant portrait, oddly, hung alongside Ghani’s on the dais.)

But the United States does have leverage to use in service of success. Most importantly, leverage provided by the continued U.S. troop presence will not diminish markedly until the very end of the drawdown. The bulk of the fourteen thousand U.S. troops now in Afghanistan are dedicated to missions with little political meaning, like the expensive and largely failed effort to build a modern Afghan National Security Force. With a tiny fraction of the current commitment—maybe just a few hundred troops—the United States can retain its most important threat to the Taliban, the counterterrorism forces successfully targeting Taliban leadership.

In addition, most Afghan leaders, including much of the Taliban leadership, recognize that they will remain dependent on the U.S.-led international donor community. No Afghan state has ever been able to mobilize sufficient domestic resources to keep the peace. When they succeed, it is by distributing international funds—British, Soviet, or American—to the regions. The promise of continued international support and the threat of its withdrawal are leverage to encourage and shape an intra-Afghan settlement.

The need for international financial support will remain a sticky long-term conundrum for the United States. The Afghan Government is already deeply corrupt and guilty of terrible human rights abuses. The presence of U.S. and NATO forces has forced donors, grudgingly, to overlook these failings. A government with strong Taliban participation and less day-to-day U.S. influence can only be worse, but if the international community responds by cutting off funds, whatever political and security accommodations Afghans reach among themselves will collapse.

Without being Pollyannaish, the United States should first and foremost use its influence to ensure broad Afghan representation in intra-Afghan talks, with a special focus on women, minorities, and other groups at special risk in a peace settlement.

Using U.S. leverage to craft an Afghan settlement demands incredible deftness in both Washington and Kabul. More, certainly, than either administration has yet displayed.

In particular, Afghan National Security Advisor Hamdullah Mohib’s public attack on Ambassador Khalizad and U.S. policy more generally is a disaster for Afghan policymakers. Even (or especially) if Kabul feels (or is) insufficiently consulted on U.S.-Taliban talks, its worst move is to advertise the distance between themselves and their main patrons. Ghani should instead ostentatiously embrace the U.S.-led peace effort, painting Ambassador Khalizad as his agent in the effort. If Ghani persuades other Afghan leaders, the Taliban, or regional actors that he and his government are not important to the United States, he and his government will quickly become unimportant to all of them.

Every civil war is a regional proxy war, and Afghanistan is no exception. Most famously, the Taliban depend on extensive support from Pakistan, but Iran, India, Russia, and the Central Asian states all have clients, too.

A quick rundown – without, of course, any endorsement—of each power’s perception of their interests in Afghanistan:

Pakistan—by far the most dangerous and influential regional player—wants enough influence over the border areas and over Afghan national security policy to believe that they have “strategic depth” and assurances against Indian intelligence infiltration or any Indian role in the Afghan security forces. Pakistan also has concerns about Afghan border claims and claims to the loyalty of some Pakistani ethnic groups, and at a minimum they evaluate any peace agreement based on whether the resulting political arrangements in Afghanistan would be inherently hostile to these Pakistani interests.

Iran wants to make sure that the United States cannot use bases in Afghanistan against Iran. Iran and Afghanistan are also deeply integrated in ways that Iran can find threatening. A huge Afghan diaspora in Iran is economically important but also eases narcotics trafficking—Iran may have the world’s worst opiate addiction problem. And Iran is worried about anti-Shi’a extremist groups like the Taliban adopting a regional agenda.

Russia is also worried about U.S. influence and about the potential for terrorism and extremist ideology to spread through Central Asia and potentially into Russian Muslim communities.

India wants to establish its position as a regional power with much greater economic, political, and cultural sway than its Pakistani rival, and it wants to limit the expansion of Pakistani-supported militant safe haven in Afghanistan.

China wants to protect its “all weather friend” in Pakistan, but it can be schizophrenic about whether that means helping Pakistan achieve its policy goals or protecting Pakistan against its own worst instincts in supporting ill-controlled militant proxies.

The five Central Asian states are all to one degree or another concerned about terrorism and extremist ideology, as well as narcotics and other trafficking.

It is worth noting that for all the powers worried about extremism, militancy, terrorism, trafficking, and other wages of Afghan disorder, there could be a virtuous cycle as they see the value of a political settlement and provide support. Historically, vicious cycles have been more common, as regional powers support their own proxies to achieve short-term security goals at the cost of continuing insecurity and ungoverned spaces.

For many years, conventional wisdom was that every regional country has the following preferences:

First choice, my side wins on the battlefield or at the negotiating table.

Third choice, the other guy’s client is advantaged.

Under these conditions, a stable settlement would be hard to reach. Any disgruntled party would be able to find a foreign sponsor willing to support their ambitions, even at the risk of continued war. Recently, there have been indications that the regional players are becoming more concerned about the costs of chaos in Afghanistan—especially as they have become convinced that the United States may in fact actually leave.

Nevertheless, regional actors will disrupt any peace settlement if they feel it endangers their most important strategic interests. Avoiding this requires extensive consultations between the regional countries and Afghan leaders to create transparency and confidence in the peace process and to identify and communicate potential red lines. The international community, and especially the United States, have roles to play in regional dialogue, alternatively offering assurances or applying pressure to keep Afghanistan’s neighbors on side, or at least on the sidelines.

Unfortunately, given poisonous relations with Iran, Russia, and Pakistan and trade tensions with China and India, the United States is undermining its potential as a diplomatic broker. As with most problems, no other player can fill the void—but many will audition for the role.

Even a skillfully managed regional dialogue will confront a dire obstacle. Iran, Pakistan, and Russia will each need to decide whether their Afghan policy is to be guided by their interests vis-à-vis Afghanistan or by a deeper need to confound Washington. Withdrawal from Afghanistan will give them each many opportunities to do so.

This is where the contradictions of “America First” become so painfully evident—it is a fantasy of U.S. power that denies the need to make hard decisions about priorities. It is hard to share the burden when you pick fights with prospective burden-sharers.

The above description may seem irredeemably complicated, encouraging policymakers to think that it is not time for a real peace process.