Now for the Hard Part: Converting Law into Order in the South China Sea 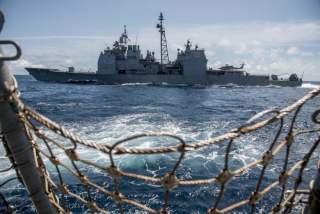 Declaring the law is one thing, upholding it another thing altogether.

After Tuesday’s landmark ruling from the Permanent Court of Arbitration regarding the South China Sea, the gulf between China and the region has widened. China has busily staked out a position that will be hard to climb down from, while the United States and its allies and partners are hoping to elevate diplomacy backed by defense to help enforce a rules-based order. Whether polarization crowds out integration will hinge largely on responses undertaken by China, the United States and Southeast Asian claimant states in the coming weeks and months.

The South China Sea poses multiple challenges for China: domestically, as a sovereign interest; regionally, as an issue of relations with neighbors; and internationally, as a contest to displace American primacy. Geography, history, rapid military modernization, a centrally controlled narrative and enviable financial clout provide Beijing with several natural advantages.

Yet rather than marshalling these attributes toward soft power and a peaceful way forward, China has instead managed to upset just about every actor in and out of the region. For a nation that arguably invented strategy, China’s foreign policy can appear remarkably obtuse.

Nations locked in a spiraling competition seek advantage. They are said to “prep” the battlefield, playing for a favorable position should disagreement erupt into open conflict. Toward that end, since Manila filed its legal case in January 2013, China has systematically used both geopolitical hard power and geoeconomic stratagems to prepare for an unfavorable ruling. The Permanent Court of Arbitration in The Hague pulled no punches in handing down such a sharp and thorough rebuke of China’s position.

China has triply hurt its cause with its recent actions: first, by refusing to participate in a mandatory process as part of an international accord it voluntarily signed; second, by undertaking unprecedented unilateral changes, especially in the form of artificial island building; and third, in vilifying the ruling even before it was issued.

The impressive if counterproductive array of China’s actions taken since or just prior to the arbitral tribunal’s award could easily form the table of contents of a textbook on national-security gambits.

First, China has played the historical victim card. After more than a century of humiliation, during which it was forced to abide by unequal treaties and colonial powers that manhandled the Qing Dynasty, a rejuvenated China is finally ready to resume its rightful place atop the regional order. China is the “real victim,” argued a recent China Daily editorial. But this time Beijing will not play the “sick man of Asia.” The narrative of a victimized and oppressed China starts to wobble when you look at their contemporary behavior, including paving more than three thousand acres of the South China Sea in order to build up seven rocks or reefs into artificial islands with three military-grade runways among them.

Second, China continues to claim the United States seeks to contain its rise. Such a conspiracy would be very impressive, with U.S. influence reaching all five unanimous arbitral judges, the Philippines, most of Southeast Asia and broad swaths of the global community. Another prominent Chinese essay argues that America is behind a multifaceted conspiracy to create tension, divide the region, and encircle China. As apparent evidence of this caper was the “leak” that the ruling was due out on July 7, a ruse apparently designed to build tension before the real verdict was released on July 12. Such a conspiracy omits the multiple preceding predictions about the timing of the ruling.

Third, China repeatedly suggests war will result unless the United States and others back off. Because direct military confrontation with the United States is the last thing Beijing wants, most of these threats are muttered with sufficient strategic ambiguity. For instance, rather than mobilizing retired sailors for live-fire naval drills in the South Sea China as part of a concerted national response, instead the PLA Daily strained credulity by stating, “It is the common wish of many demobilized soldiers to return to the military in the context of a battle summons.”

Similarly, China was not entirely forthcoming in relating why it felt it necessary to conduct drills at the same time as PLA Navy participation in the U.S.-led Rim of the Pacific biannual exercise. China announced joint military exercises with Russia would commence in the South China Sea the day prior to the ruling being issued. Explained a Chinese military expert, “the joint drills show that China also needs support and understanding from the international society in order to defend its just title and maintain regional stability.”

Fourth, China purports that economic development awaits but is being blocked by outside interference. The brilliant new book by Robert Blackwill and Jennifer Harris describes how China successfully exploits instruments of geoeconomics such as trade, investment, finance, development, energy and cyberspace to advance its national interests. In the case of the standoff with the Philippines over Scarborough Shoal—the 2012 incident that prompted the legal case pursued by Manila and whose waters were declared by the arbitral panel to the Philippines’ exclusive economic zone—Beijing decried America for interfering in the natural development of China-Philippines economic ties.

Fifth, despite all of the conspiracy, containment and potential conflict, China is still seeking to uphold the “true” interpretation of UNCLOS. In fact, China’s official response to the ruling goes so far as to accuse the Philippines of violating China’s rights under the treaty. China’s lawfare is particularly lacking credulity at this point, but with so many lawyers working various angles of the law, and with a new domestic maritime law still forthcoming, there is a future opportunity for China to embrace UNCLOS by agreeing with the ruling’s verdict that historical rights may point to land features but not the control of specific waters.

But as one astute observer of international law wrote even before the ruling, “No country that disrespects international law can truly be a great power in the 21st century.” Unfortunately, international law is only as real as it is adhered to, and without enforcement China has a full range of options open to it to continue to ignore the law while creating ever-new facts on the ground.

So what should the United States and its allies and partners in the region do?

In the immediate wake of this ruling, the United States should encourage all parties to exercise restraint in words as well as in action. Philippine President Rodrigo Duterte should hew to his more measured words since taking up his post in Malacañan Palace. Chinese live-fire exercises in the South China Sea have only just concluded, and angry rebukes of the decision are flowing from officials in Beijing as well as state media. Supporters of a rules-based order buttressed by UNCLOS and this ruling should consistently demonstrate the principles they seek to inculcate: diplomacy, the rule of law and patience in the face of international tensions.

Immediate restraint, however, must be paired with enduring resolve. International law has no enforcement mechanism, and requires consistent pressure with broad acceptance and compliance. Today’s quiet diplomacy should enable increasingly vocal diplomacy in the weeks to come. The Obama administration should work to facilitate the most united front possible in support of the court’s ruling and the primacy of UNCLOS. Whether through soft power, dialogues or summits, the South China Sea and the importance of this ruling should be at the top of every agenda. If China seeks to attach stigma to this ruling with furious denunciation, then the United States and its partners must raise and discuss it until it is normalized and Beijing is out of breath.

To encourage states to speak out and take action in support of this ruling and international law, however, will also require clear signals that the United States will have their backs, forcefully if necessary. If China does not move toward compliance, or even worse, throws down a gauntlet against international law, then tougher actions will be essential. That would include a broader discussion of sanctions and other measures to deter wanton violations of international law. Though now is not the time for challenging freedom of navigation operations or displays of naval presence and strength, that time will no doubt come soon.

Dr. Patrick M. Cronin is Senior Director of the Asia-Pacific Security Program and Harry Krejsa a Research Associate within that program, at the Center for a New American Security (CNAS).