The Nuances of Navigating a Politically Charged Northeast Asia 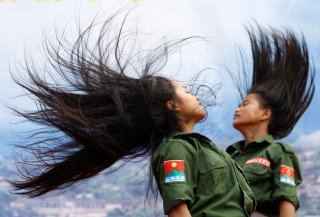 Seventy-five years ago, on Sept. 2, 1945, dignitaries from nine Allied Powers boarded the USS Missouri to bear witness to history. Three days earlier, the magnificent warship had entered Tokyo Bay. It was flying the same flag flown over the White House on December 7, 1941, the day of the surprise Japanese air attack on Pearl Harbor that catapulted the United States into World War II. Now, almost four years after the attack, a small Japanese delegation joined the gathering on the deck of the USS Missouri and, at the invitation of Gen. Douglas McArthur, two members signed a brief document proclaiming “unconditional surrender … of all Japanese armed forces.” In twenty-three minutes, with a few pen strokes and polite ceremony, a global war that had killed an estimated sixty million people in six years entered the history books. The formal surrender is still a powerful reminder of how quickly events and outcomes can change.

Among the Allies present for the surrender ceremony was the Soviet Union, represented by Lt. Gen. Kuzma Derevyanko. During the final months of the war, the forty-year-old Ukrainian-born officer represented the USSR on MacArthur’s staff. Although relatively young, Derevyanko was a key figure in the final wind-up of the war. When Joseph Stalin ominously signaled that the USSR wanted to occupy the Japanese home island of Hokkaido at war’s end, Derevyanko reported back that MacArthur and President Harry Truman were adamantly opposed to the idea. Truman afterward drove home the point himself in a direct communication to Stalin; the Soviets canceled the invasion operation. When Stalin tried again, by proposing the establishment of foreign occupation zones in Japan (similar to the ones in Germany), Derevyanko was the trusted messenger. McArthur curtly informed the Soviet general that he would not accept, nor tolerate, a divided Japan.

Derevyanko took on another assignment for his boss—one that proved to be riskier and more dangerous than any he had undertaken earlier. At Stalin’s behest, he traveled to Hiroshima and Nagasaki to glean the most information possible about the powerful weapons dropped on those cities. Stalin wanted to find out all he could about the technology credited with forcing the Japanese surrender: atomic bombs. Stalin’s ambition—and Derevyanko’s research—helped to ignite and drive the Cold War.

Most of us know what happened next. The USSR tested its first atomic bomb in 1949. Mainland China fell to Mao’s Communists and Chinese nationalists were pushed back to Taiwan. In the meantime, the United States and United Nations managed—only at great cost—to hold back Communist aggression in Korea, an expansion supported by both Russia and China. For well over a decade, the world witnessed what appeared to be a meeting of the minds between the globe’s two largest Communist nations.

But the common front that the two major powers presented to the world in the 1950s was not to last. Centuries of shared frontiers and mutual suspicion trumped short-term cooperation. In 1960, Russia and China had a serious rift over ideology and border issues that culminated in deadly clashes nine years later along the Ussuri River near Khabarovsk.

Three decades later, borders of a different kind came into play. In 1991, the forty-five-year Cold War ended with the mostly peaceful break-up of the Soviet Union. For a brief moment, reborn Russia and the United States might have found it mutually beneficial to encourage players in volatile Asia—including China—to repair fraught relationships and embrace regional stability. Unfortunately, major policy differences between the two powers over the Balkans, Ukraine, Georgia, the Middle East and a host of other issues eclipsed the opportunity, at least in the short-term, to work toward the same ends.

This is unfortunate, because when stripped from western-centric policy tensions, U.S.-Russian interests in Northeast Asia appear more alike than not, especially when it comes to the fractious dynamics between and among nations in the region. I concluded this, having served three years in South Korea, and after multiple travels in Russia’s Far East from 1996 to late 2018 including along the broad Amur River basin separating Russia and China.

Nowhere else in the world is there such a concentration of population-dense nations and resource-deficient economies primed to erupt into bloody conflict following a single incident or inadvertent accident. Historical slights, some enormous in scale, are expediently buried but not forgotten. An arms race is already underway in Northeast Asia, led by China; and a recalcitrant North Korea. The historically deep scars underlying regional tensions could easily be fanned into flames if countries there continue jockeying for control over nebulously claimed islands and territories, most that are perceived to be resource-rich.

Although Russia and the United States have adopted primarily defensive postures in the region, mainly to secure their strategic positions, there is an opportunity to do more. Right now, there’s no formal security mechanism in Northeast Asia to keep collective peace and vital eastern sea lanes open.

The overstretched U.S. Navy and a few regional partners do their best to maintain a calm status quo but they’re not prepared to fully stop distrustful neighbors from going at each other’s throats. The best they can do is earmark tremendous effort and resources to deter regional threats such as Chinese pressure in the South China Sea and unpredictable nuclear-armed North Korea.

Real peace in the region would receive a major boost if Russia could jettison its reflexive desire to see American influence wane in the North Pacific. When first judging economic trade, the whole Pacific, even Russia and China, benefits right now from U.S.-led and financed operations that have repeatedly proven crucial in a region that lacks an inclusive security organization such as proven NATO. If the U.S. retrenches, what would replace it? The successor isn’t likely to be a player who will respect Russia’s sparsely defended borders or keep its hands off of the vast, underpopulated nation’s Far Eastern rich oil and mineral resources. In short, Russia long-term, would be worse off without the regional U.S. presence.

On the eve of the seventy-fifth anniversary of Victory over Japan Day, I believe the time is right to remember that the dangerously distrustful relationship between Russia and the United States has not always been as delicate and strained as it is right now. This also does not have to be zero-sum for either nation regarding relations with China. There’s an urgent need for the United States and Russia to help lead a multi-nation regional dialogue that should include China to sort out the tangled web of history, sensitivities and threat perceptions that still hold sway in national imaginations in the Northeast Pacific.

Russia could even help set the tone. For example, what would it take for Japan and Russia to settle, once and for all, the Kuril Islands dispute dating from the closing days of World War II? Resolving the seventy-five-year-old issue would bring major benefits. Russia would have better access to prosperous Japan. Despite China’s troubling military growth, Japan would have less incentive to continue jettisoning its post-World War II pacifism for even more robustly building up a modern military to defend itself.

Another regional phenomenon develops, a natural one. The strategic importance of the roughly three-thousand-mile long Northern Sea Route (NSR) grows, as its increasingly navigable route melts along Russia’s long coastline with the Arctic. The widening eastern entrance to the NSR, through which increasing Pacific maritime trade traffic headed west, will pass, is the Bering Strait where US and Russian Coast Guards maintain correct, cooperative relations.

Efforts to find common ground in Northeast Asia in no way means reneging, or softening, core positions on other issues or locations. For instance, U.S. support to allies and partners in the region is non-negotiable. However, real cooperation in a strategic region where U.S. and Russian interests align could possibly soften some of the sharp-edged and potentially dangerous situations in other parts of the world.

We would do well to remember the fate of young Derevyanko after his visits to Nagasaki and Hiroshima. His pursuit of a powerful weapon for his boss Stalin ultimately proved a death sentence. In 1954, he died at age fifty of complications due to radiation poisoning. In 2007, in an interesting historical side-note, the Soviet-era general was posthumously awarded the Hero Star from independent Ukraine.

To close, on this historic seventy-fifth anniversary, instead of letting the Pacific region be poisoned—quickly or slowly—by long-term toxic relationships, let’s collectively write a different ending to the story, before it’s too late.

Brig. Gen. (retired) Peter B. Zwack was the United States senior defense attache to Russia from 2012-14. He served in Asia with the US Army and traveled extensively in the Russian Far East. He is a Wilson Center Global Fellow at the Kennan Institute.