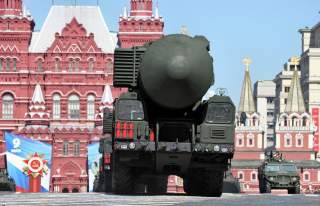 Amid the wider sense of a global crisis in security, from Iraq to Ukraine to the South China Sea, there is a deeper long-term threat: the risk to nuclear arms control.

In this worsening climate of great-power tension and mistrust, the nuclear arms-control regime long in place between the United States and Russia is in danger. And without it, efforts to stop the spread of nuclear weapons, or at least limit their role in international affairs, are also in trouble. For instance, the prospect of heading off a destabilizing nuclear-arms competition in Asia, including between China and the United States, will further recede, as will the appeal of the U.S.-Russian precedent of restraint for India and Pakistan. America and Russia remain overwhelmingly the world’s strongest nuclear-armed powers, and their example is crucial for the future of nonproliferation, disarmament and the global nuclear peace.

A key mechanism here is the historic 1987 intermediate range nuclear forces (INF) treaty, under which Moscow and Washington banned the deployment of a whole destabilizing class of nuclear-armed missiles. Despite signs that Russia had violated this agreement as far back as 2010, and concerns voiced by Putin in 2007 that China also ought to be included, only now have things come to a head. U.S. president Barack Obama recently took the extraordinary step of sending a letter to Vladimir Putin, levelling the accusation that Russia is in breach of its solemn treaty commitments by testing cruise missiles with a range between 500 and 5,500km since 2008.

Given the high state of current tensions, including fears of a Russian invasion of eastern Ukraine and international outrage over the shooting down of passenger flight MH17, it is difficult to imagine Russia and the United States now putting aside their differences to prioritize a reinvigoration of nuclear arms control.

But recent events aren’t the only threat to strategic arms control between the United States and Russia—for two reasons. First, existing treaties such as New START (2010) and the INF don’t address modern and nascent nuclear capabilities present in the U.S.-Russian relationship, such as sea-launched cruise missiles. And second, politically and strategically, there seems to be no great momentum, nor will in either camp to move forward on nuclear risk mitigation as there was during the abortive “reset” of Obama’s first presidential term. President Obama’s great hopes for a world without nuclear weapons, proclaimed in Prague in 2009, are more than ever confronted by ugly geopolitical realities.

Of course, the obvious benefit of nuclear arms control is that it reduces the numbers of these devastating weapons deployed for potential use. But equally important is the less-measurable benefit produced by a system of inspections, building confidence and providing strategic warning. Thus under New START, numbers of non-deployed weapons were proverbial low-hanging fruit traded in return for access and verification. In turn, Washington and Moscow established a practical, normative mechanism for crisis stability.

Nuclear weapons may quietly cast a long shadow over the current Ukraine crisis—their very existence must be considered a major restraint on a Western military response, and perhaps as a reminder of that, Russia has conducted drills simulating a NATO nuclear strike. Whatever else he fears, Putin is presumably concerned that were Ukraine to join NATO, it would become part of a nuclear-armed alliance able to deter Russia and, in theory, strike first in a crisis. It can also be argued that Russia’s renewed interest in previously-banned, intermediate-range missiles is partly a product of Russian concern about NATO capabilities, such as ballistic-missile defences, submarine-launched cruise missiles and progress on technology, such as hypersonic glide vehicles required to achieve the objectives of what is known as Prompt Global Strike. Russia’s argument, right or wrong, is that these undermine the deterrence stability established during the close of the Cold War.

For its part, Washington has not gone into depth about what is wrong with Russia’s violation of the treaty other than it puts European allies at risk and that it hopes it can negotiate a return to “compliance.” The United States sees its own actions as being in line with the stabilizing and reassuring objective of having a wide range of non-nuclear options for its treaty commitments in Europe and its capability to deter without having to resort to nuclear threats.

So even if the United States and Russia were somehow to bring their present geopolitical crisis under control and renew their focus on nuclear-arms limitations, they would find new barriers to cooperation, thanks to changing technology. Things may not have come to a head so soon if not for Putin’s coercion towards Ukraine, but sooner or later New START and the INF would have been endangered by the emergence of new weapons capabilities not covered in either treaty.

If the arms-control mechanisms between the United States and Russia collapse, then the world loses its ability—and crucially, the example—to properly interpret and recognize nuclear intentions. We, therefore, need new causes for their reinvigoration, and preferably not borne out of nuclear crisis. New technologies need to be recognized as potentially destabilizing in their nascent stages of operation, even if in decades to come they form additional or modernized legs to the long-accepted nuclear ‘triad’ (aircraft, land-based missiles and submarine-launched ballistic missiles) and thus contribute to new forms of deterrence stability. Until then, we face the prospect of losing access and channels of communication in times of crisis, leaving decision makers to rely on guesswork, crystal-ball gazing and espionage: not unlike the worst phases of the Cold War.

Ultimately, the real danger may not be that the current arms-control treaties between Washington and the Kremlin might break down, but that whatever (if anything) replaces them won’t maintain the kind of channels of access and communication that have kept the past quarter-century of U.S.-Russian strategic relations stable. Already, this seems to be the trend, as a plan to allow nuclear scientists from the United States and Russia to access each other’s nuclear sites has been put on ice as of March this year, directly related to the crisis in Ukraine.

The Ukraine crisis is ushering in a historic low in relations between Russia and the West, and damaging, perhaps even threatening to unravel, some of the greatest achievements of nuclear arms control. Elsewhere in a troubled world, a second nuclear age is underway as China modernizes its arsenal, North Korea continues to develop its provocative capabilities and Indian and Pakistani nuclear programs continue apace. Whatever else their burdens, the United States and Russia hold a special responsibility for leadership as the original and largest nuclear powers. If they fail in that, the repercussions will be felt by the rest of the world long into the future.

Will Hobart is a research associate on nuclear issues with the Lowy Institute. The Institute's work in this field is partly supported through its partnership with the Nuclear Security Project of the Nuclear Threat Initiative. The views in this article are the author's alone.