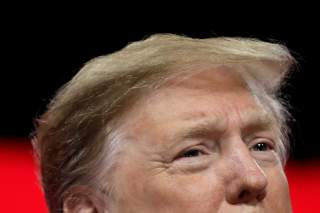 There can no longer be any doubt that the Trump administration has a strategy for dealing with the most perilous arms control problems that continue to afflict the United States. From Russia to North Korea and Iran, the strategy is essentially the same: sanctions, grand bargains, and healthy amounts of wishful thinking.

This motif was on full display at the first two sessions of the Carnegie Endowment for International Peace’s 2019 International Nuclear Policy Conference, where keynote speakers Andrea Thompson, the U.S. Under Secretary of State for Arms Control and International Security, and Stephen Biegun, the U.S. Special Representative for North Korea, spoke broadly on the Trump administration’s thinking and plans for the next two years.

As this was a nuclear-policy conference, it was certain that arms control would weigh heavily on the minds of the speakers and congregants. Yet an air of greater skepticism and derisive concern was more prevalent today than when I attended two years ago, undoubtedly due to the president’s recent failure to secure an agreement in Hanoi with Kim Jong-un and his withdrawal from a slew of arms control agreements, including the Intermediate-Range Nuclear Forces (INF) Treaty with Russia and Joint Comprehensive Plan of Action (JCPOA) with Iran.

Thompson’s discussion of the administration’s arms control efforts was sweeping, but its central themes focused on those of trust and conviction. When asked by Mark Fitzpatrick, the moderator and associate fellow at the International Institute for Strategic Studies, about the prospects for extending the New START treaty with Russia, she stated that the administration was in the midst of ongoing consultations with experts, but that concern about Moscow’s reliability was impacting the process. “How does [Russia’s INF violation] set the precedent for future arms control treaties?” she asked in an apparent sidestep of the fact that arms control treaties rely on verification mechanisms to reveal violations and hold signatories accountable.

It was odd listening to Thompson become “passionate”—in her words—about protecting the American people while simultaneously disregarding the efficacy of arms control agreements with Russia. Arms control certainly benefits American security by giving the United States and its interlocutors tools to understand and limit the other’s capabilities, thereby reducing tensions. It was not lost on the audience that a withdrawal, in contrast, releases signatories from their obligations and reduces accountability mechanisms, leaving only penal responses with less than stellar track records to compel a change in behavior.

Another interesting debate covered the Trump administration’s policy on Saudi Arabia’s nuclear energy program. While Thompson was forthright that the U.S. position will always be the famed “gold standard,” she was noncommittal on whether that was the Trump administration’s “going-in position or a requirement,” instead saying that an agreement could take the form of a memorandum of understanding, a 123 agreement (named for the section of the Atomic Energy Act of 1954 that regulates American exports of nuclear technology), or something else. One point that she did stress several times, however, is that U.S. companies must attain access to the Saudi nuclear industry or else lose market share to Russia and China. Given that this seemed to mirror the administration’s position—led by Jared Kushner—on selling nuclear technology to the Saudis without an agreement, her answers were not reassuring.

Just coming off a poor showing in Hanoi, Steve Biegun arguably had the more difficult job of the two speakers given that he had to answer the skeptical questions of New York Times Pentagon correspondent Helene Cooper. The first hurdle he had to jump pertained to whether the administration would consider pursuing a more incremental path toward North Korean denuclearization after Hanoi, which he firmly rejected. In his view, “diplomacy was still alive,” but an incremental path would let the North Koreans trade “portions” of their nuclear program for sanctions relief, thereby undermining the international unity on sanctions while only offering up their capabilities piecemeal.

Instead, following President Donald Trump’s challenge to Kim Jong-un to “go big,” Biegun said that the Trump administration is seeking the grandest of bargains with Pyongyang: where North Korea trades all of its weapons of mass destruction (see: nuclear, chemical, and biological) as a “foundation” for sanctions relief, an enduring peace, and a transformed relationship with the United States. In Biegun’s mind, this “larger vision” would work to overcome the reasons why the JCPOA failed, specifically in that it too narrowly focused on Iran’s nuclear weapons program while neglecting the other places in the relationship (e.g. support for proxies) that continued to create significant tension. When asked what incentive Kim Jong-un has to pursue a policy of everything now for promises later—especially after Trump tore up the JCPOA after the United States negotiated it—Biegun could only offer his contention that had the North Koreans begun this process of full-scale disarmament at the Singapore summit last June, that they would be nearly done by now and the benefits would be starting to materialize. How Biegun imagines getting the North Koreans to agree not only to disarm but to permit overt U.S. assistance in disarming, he did not share.