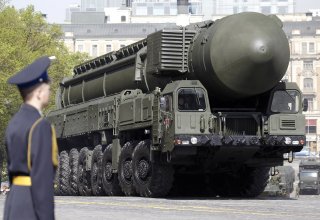 The United States’ nuclear arsenal has been shaped by six major bilateral arms control agreements with the Soviet Union and Russia that date to the Strategic Arms Limitations Talks in 1972 (SALT I). That agreement provided a cap on the number of deployed warheads and launchers. The Strategic Arms Reduction Treaty agreement of 1991 (START I) marked the beginning of a significant decrease in deployed strategic nuclear weapons, reducing arsenals to 1,550 warheads under New START agreement signed in 2010.

More practically, New START keeps the United States and Russian arsenals around two thousand to twenty-one hundred deployed warheads. That count includes the gravity bombs and cruise missiles allowed to be deployed on nuclear-capable bombers. Assuming the Russians have complied fully with New START, the 90 percent reduction in nuclear warheads deployed by each country is a positive sign that perhaps strategic stability can be sustained.

But that doesn’t tell the whole story. The strategic situation has changed since New START was signed. Russia was not viewed as an aggressive threat in 2010, and China was not a major factor.

Russia has now modernized its entire nuclear arsenal and has claimed that six of its strategic nuclear systems that are not constrained by the New START. The Russians also have at least two thousand theater- or medium-range nuclear weapons not counted by New START, compared to several hundred for the United States. Theater nuclear systems have not been subject to formal arms agreements between the United States and Russia due to the difficulty in having workable verification measures.

Those difficulties are compounded by the rise of China. Until recently, strategic assessments estimated China’s nuclear arsenal to be between two hundred and three hundred warheads. The U.S. nuclear arsenal permitted under arms deals with Moscow, including New START, was believed to be sufficient. But according to senior military officials, the Chinese have added around 350 intercontinental ballistic missile (ICBM) silos. Each can house a DongFeng-41 (DF-41) ICBM capable of carrying ten warheads. That implies—though does not guarantee—that China could deploy 3,500 or more additional warheads, with hundreds on alert to be launched in a matter of minutes.

Given these factors, where does one go on arms control beyond the New START? Should arms control guide nuclear modernization deterrent requirements or the other way around?

Some Americans advocate for further decreasing our strategic nuclear weapons to about one thousand warheads, even if the reduction is unilateral. Russia has shown no interest in a similar reduction, but many within the disarmament community and a small number of members of Congress make the case. They advocate for an agreement with Russia or a U.S. policy that achieves the same outcome. This still seems unlikely. The administration believes Russia has become increasingly destabilizing in its posture toward the United States in the years since New START.

Four questions should be considered when weighing these issues.

First, does it matter if China and Russia combine to have considerably more deployed warheads than the United States? Second, does it matter if China alone has more warheads on alert than either the United States or Russia? Third, does this require a reevaluation of the New START recently extended for five years? And fourth, what are the prospects that an effective arms deal with China can be melded into or coordinated with the current New START deal with Russia while also ensuring improved strategic stability and balance?

The United States does have about one thousand nuclear warheads on alert at any given time. Other nuclear weapons, like those on submarines, normally are not on alert or in transit or on patrol on a day-to-day peacetime basis.

This would likely require a unique tripartite nuclear arms deal between or among Russia, China, and the United States. That outlook may be too sanguine. A number of obstacles stand in the way of such an agreement.

First, China has never been transparent with respect to its nuclear forces, nor forthcoming about its nuclear strategy or policy. Beijing has shown zero interest in formal nuclear arms deals. Without this transparency, there is no basis for agreeing to limits. Any potential limits could not be verified.

Second, the presence of additional uncontrolled theater nuclear forces in China and Russia may tip the nuclear balance against the United States. This could worsen strategic stability, and even make the possible use of nuclear weapons more likely.

Third, Russia and China’s theater or non-strategic nuclear forces will likely have to be included in any arms agreement. There is no precedent for that in the past half-century of nuclear arms deals. There is a critical need for such accountability given the concerns of our allies over such regional nuclear threats they face. But there are serious barriers that must be overcome to accomplish such an agreement.

Fourth, China’s nuclear buildup is occurring for a reason. China is seeking a highly coercive capability to prevent the United States from coming to the defense of its allies. This would tear the fabric of our nuclear umbrella, undermining both nuclear and conventional deterrence. It would also diminish future prospects for nuclear arms control.

Most importantly, without a continued firm firebreak preventing nuclear weapons from ever being used, our current strategy to prevent conventional conflict cannot be sustained. As Adm. Charles Richard, the commander of U.S. Strategic Command has explained, all our conventional deterrent plans require nuclear weapons not be introduced into any conflict.

Will future arms control be able to help resolve this geostrategic puzzle, or will other combined measures such as enhanced nuclear modernization, long-range conventional strike, and missile defenses have to fill the gap between current American deterrence and future requirements?

Verifiable nuclear arms control might be part of that future, but it cannot be assumed to deal with the projected and emerging strategic nuclear imbalance. Russia’s record of cheating on such deals and Chinese opposition to nuclear arms deals will prevent that.

Nuclear modernization is the most important part of America’s future deterrent requirements, which means the current bipartisan consensus supporting such modernization is a national asset worth both keeping and sustaining especially in the face of an unprecedented dual Chinese and Russian nuclear buildup.

In that light, unilateral U.S. concessions make no sense. Better would be a combination of nuclear, missile defense and conventional strike modernization and if possible a smart, supportive verifiable arms deal.

Peter Huessy is director of Strategic Deterrent Studies at the Mitchell Institute for Aerospace Studies.