Nuclear Escalation Would Be Disastrous for Russia 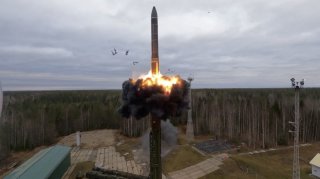 Ukraine’s unexpectedly stout resistance to Russian president Vladimir Putin’s war of aggression has contradicted many expert predictions and popular assumptions about Russian military performance and prowess. Faced with a protracted war of attrition instead of a rapid coup de main against the Ukrainian government, Putin has resorted to a controversial call-up of military reserves in order to replace lost manpower and blunt the momentum of Ukrainian counteroffensives supported by NATO weapons and intelligence.

Unfortunately, Putin has not stopped there. He has also issued repeated threats of nuclear first use against Ukrainian forces, especially those fighting in four eastern and southern regions, and, presumably, any conducting strikes into Russian state territory. Putin’s references to the possibility of nuclear use have been seconded by other officials in the Russian government, including former President Dmitri Medvedev, and widely broadcasted on Russian state media.

Some NATO military analysts might dismiss Putin’s references to nuclear first use as a bluff to compensate for Russia’s embarrassing military incompetence in conventional warfare. Prior to the war against Ukraine, Russia was widely regarded as the world’s second leading military power—not only on account of its large nuclear arsenal. Under Putin, Russia has rebuilt a good deal of the military capability lost during the lean years following the demise of the Soviet Union and the economic chaos of the 1990s. Russia’s military doctrine and organization for fighting modern conventional wars have also been revamped, especially since the reforms beginning in 2007. Russia has made great efforts to improve the quality of enlisted personnel and lower-ranking officers, as well as providing rhetorical commitments for recruiting and retaining more contract soldiers to rely less on draftees.

The war in Ukraine, however, has shown that many deficiencies remain in Russian military training, planning, command and control, logistics, and combat operations and tactics. Most notably, Russia has maintained the Soviet-style system of top-down command even for the most trivial decisions, discouraging initiative on the part of junior officers and senior enlisted personnel who might have more timely information about the conduct of battle. In contrast, Ukraine has developed a new generation of military leaders who are culturally adaptive and able to take the initiative and maximize their advantages in a fast-moving information environment. As a result, Ukraine has utilized a more fluid military structure that combines regular units with partisans and other volunteer forces to close the OODA loop (observe, orient, decide, act) faster than its Russian opponents can. NATO intelligence support, transfers of advanced weapons, training, and financial aid have also paid dividends for Ukrainian forces.

Moscow’s difficulties in the field are accompanied by distractions on the home front. Putin’s compulsory reserve mobilization has degenerated into a free for all. Police and military recruiters are snatching young men off the street, including from places of work and residences, and sending them to short training courses followed by a trip to the front. Other young men of military age are fleeing the country in substantial numbers and in Russian-occupied Ukrainian territory, several thousand Ukrainians may have been deported to Russia, including children sent to Russian families misrepresented as orphans, in violation of international law. In a case of military-on-military dissidence, two men training at a military firing range in Russia killed eleven other trainees and wounded fifteen more in an incident that the Russian defense ministry described as a terrorist act.

In the face of battlefield reverses and domestic resistance to conscription, Putin has doubled down, and his advisors talk of additional mobilizations to come. Doubtless, Russian leaders fear that they are standing on quicksand and one response by Putin has been to make nuclear threats more frequently. These repeated references to nuclear war are intended to influence public opinion in Ukraine and NATO countries. Russia’s threats of nuclear first use or of a wider nuclear war are an example of bad political and military judgment that will not rescue Moscow from its self-induced military fiasco.

The problem with Russia’s nuclear warnings is that neither Russia nor any other nuclear weapons state can maintain control over events once the nuclear threshold has been crossed. Russian leaders may imagine that they can unleash a low-yield “tactical” nuclear weapon—compared to “strategic” nuclear weapons deployed on intercontinental launchers—and regain a temporary advantage on the escalation ladder. But the use of a nuclear weapon would not just be a military incident but a political game-changer. The world will hold its breath since the reactions of Ukrainian and NATO political leaders are not necessarily going to be what Putin and his advisers expect.

Nor will Russian political elites and the public necessarily rally around the flag in response to a nuclear weapon fired against Ukrainians. Many Ukrainians have relatives in Russia and vice versa. The people of Russia and Ukraine do not hate one another, only their governments do. Many Russians will react with horror and disgust at nuclear first use in Ukraine and the mass exodus of Russians from their own country will grow larger in number as images of Armageddon dominate the media and social discourse.

Some contend that the Russian military has adopted a rationale for nuclear first use based on the logic of “escalate to de-escalate” if a conflict appears to be going badly for Russia. If so, it would be a mistake for Russia to apply this doctrine to the exigent circumstances in Ukraine. During the Cold War, numerous studies and war games examined the concept of limited nuclear war in Europe with varying sets of assumptions, role players, and outcomes. For the most part, players had considerable difficulty managing the conflict before the fighting escalated to comprehensive attacks between the United States and the Soviet Union.

Less is known about Soviet-era war games but if Russia expects to manage escalation after nuclear first use they are likely to be disappointed. Nuclear escalation control is not like a minuet or a waltz; it resembles more of a mosh pit. Optimism assumes that command and control systems will still work as expected; that leaders and their advisers will keep their heads; that panic and mass migration will not throw European countries into political and social turmoil; and that infrastructure on which states depend for day-to-day functions (manufacturing, transportation, agriculture, fuel, power supplies) will be viable even in the face of mass destruction. There is also the question of whether enlisted personnel in the Russian military, already unhappy about the entire enterprise in Ukraine, will move forward into irradiated wastelands resembling Chernobyl on steroids.

NATO’s political and military unity is now as important as it has ever been. Putin’s nuclear saber-rattling should be taken seriously but it should not divide the United States from its European allies. There is no such thing as a limited nuclear war in Europe and Russia would be foolish to expect that it could contain a nuclear war on Ukrainian territory. Putin should stop imitating Kim Jong-un and revisit the example of Ronald Reagan and Mikhail Gorbachev with respect to nuclear war and deterrence. Normalizing Armageddon invites misperception, inadvertent escalation, and unthinkable destruction.

Stephen Cimbala is a Distinguished Professor of Political Science at Penn State, Brandywine.

Lawrence Korb is a Senior Fellow at the Center for American Progress and former Assistant Secretary of Defense.