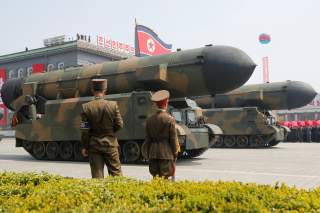 Chinese state media on Tuesday confirmed North Korean leader Kim Jong-un had visited Chinese president Xi Jinping in Beijing earlier this week. While the significance and true purpose of the trip remains to be determined, the position of the United States remains effectively unchanged: we remain in the dominant position, time is on our side, and there will be no war on the peninsula unless we start one with a preventive strike.

Coming barely a month before the summit between South Korean president Moon Jae-in, Kim’s visit appeared designed, at least in part, to convey a renewed solidarity between Pyongyang and Beijing. Chinese state media reported that the China/North Korea relationship had been “cultivated meticulously by the elder generations of leaders of both parties and both countries, was the precious wealth of both sides.”

Kim, China’s Global Times said, told Xi that the “issue of denuclearization of the Korean Peninsula can be resolved, if south Korea and the United States respond to our efforts with goodwill . . . while taking progressive and synchronous measures for the realization of peace," which likely reflects one of Kim’s objectives of negotiations: getting early sanctions relief or quid pro quo concessions from Trump. That’s not likely to find a receptive audience in the White House.

Last October Trump tweeted that, “Being nice to Rocket Man hasn’t worked in 25 years, why would it work now?,” adding that he believed “Clinton failed, Bush failed, and Obama failed. I won’t fail.” National Security Advisor-designate John Bolton is probably the least likely person on the planet to counsel Trump to give Kim rewards for small steps.

The seemingly irreconcilable positions between Trump and Kim don’t auger well for particularly fruitful talks during the meeting tentatively set for May. That does not, however, need to result in an increase in the chance of war, because—despite what many have claimed—we are not “running out of time.” To the contrary, if the May Trump/Kim meeting takes place, the president will enter the talks in an unqualified position of strength and can guarantee American security short of war indefinitely.

While it is a certainty that North Korea tries its best to cheat, the international sanctions presently weighing on it are the strongest ever imposed and are inflicting genuine pain on Kim’s regime. UN Security Council Resolution UNSCR 2375 levied against Pyongyang last fall explicitly demanded that Kim “immediately abandon all nuclear weapons and existing nuclear programs in a complete, verifiable and irreversible manner.” There is no requirement that North Korea be rewarded for incremental or partial compliance.

Trump is under no compulsion to make concessions short of full conformity. It is important, therefore, that the objective of negotiations with Kim be one that is attainable, sustainable, and, under all circumstances, guarantees the security of the United States and its allies. If the United States goes into these talks with the expectation that full denuclearization has to be accomplished on an arbitrary timeline, then it sets itself up for failure before the talks even begin.

Kim Jong-un did not press relentlessly over the past five years to produce an operational ICBM nuclear missile force to then immediately give it away because of a UN resolution. He will try to extract as many concessions from the United States as possible, giving as little away in exchange as possible. But Trump is neither obligated through international agreements nor compelled by conditions to make major concessions.

It is critical to understand that America has one hundred times the nuclear power that North Korea does, and an immeasurable superiority in conventional arms. Moreover, as time continues to pass, the economic pain suffered by Kim’s regime increases and compounds while America’s economy remains the largest in the world and will continue to grow. Thus, Trump doesn’t have to give up anything to keep the country safe while the pressure for Kim to comply with UNSCR 2375 increases by the month.

We can expect Kim to continue trying to build an image as a reasonable and peace-seeking head of state, improving ties with Beijing, and trying to find ways to enhance relations with South Korea. He will likely volunteer to give in on issues not related to his nuclear deterrent in order to gain concessions, payoffs, and relief from sanctions.

He will also try to use his influence and diplomatic tools to try and drive a wedge between China, South Korea and the United States in an attempt exploit divisions to his advantage. Trump, however, need merely keep in mind that time is on America’s side, not Kim’s, and that no matter what Kim tries to do, America’s never-blinking military deterrent can keep the United States safe from North Korean aggression indefinitely.