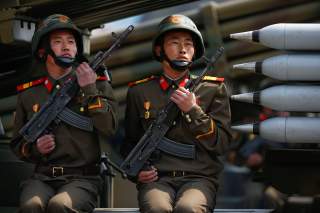 Despite mounting international pressure, North Korea is resolutely advancing toward achieving nuclear deterrent against the United States. The rapid pace of its nuclear development has caused impatience on the side of the United States and its allies, and one recurring theme in recent debates is that the international community is “running out of time.”

However, this mindset is incorrect. Due to two narratives established by the post–Cold War proliferation studies, which have dealt with the issue of emerging nuclear powers, the implication of Pyongyang’s limited nuclear capability has been overestimated and we have cornered ourselves into an unnecessarily disadvantageous position. As some experts have noted, North Korea’s nuclear ICBM is not a game changer. It doesn’t make a cataclysmic shift in the East-Asian strategic environment imminent, and eventual denuclearization is still possible. There is no need to prematurely resort to a costly preventive-war. Only by reversing those narratives can we deal with this national-security issue more easily rather than in a time-pressured manner.

What has Pyongyang achieved?

North Korea is about to acquire the technological capability to produce nuclear-tipped missiles capable of hitting the continental United States. In terms of deterrence, however, what can accrue to North Korea from achieving and possessing nuclear ICBMs is limited—especially since such a rudimentary capability is vulnerable to the adversary’s nuclear first-strike. It cannot be anything but a form of existential deterrence, which rests not on the certainty of nuclear retaliation but on the uncertainty perceived by the adversary, and its deterrent effect is, by nature, vague and unreliable—especially in the eyes of the possessor. Even more, there is no way that this capability can serve as an effective tool of compellence to make significant gains, like relieving sanctions vis-à-vis more established nuclear powers.

Realizing this, every other state involved in mutual nuclear deterrence has proceeded beyond such a rudimentary capability and, at minimum, sought an assured retaliatory capability, which is enough for ensuring that the possessor can implement nuclear counterattacks—even after absorbing the adversary’s first strike. There is no reason to expect otherwise for Pyongyang. In this sense, North Korea’s nuclear development is not nearing its completion.

If North Korea should eventually acquire an assured retaliatory capability against the United States, then that capability could bring much significant deterrent effects. But the North must be a long way from assured retaliatory capability, because the United States has the most elaborated nuclear war-fighting capability in the world. To achieve that goal, the North’s nuclear forces must be reliable and survivable enough to ride out the massive U.S. counterforce first-strike and they must be able to penetrate missile-defense shields. Additionally, North Korea must have a well-protected command and control architecture as well as institutional setups and operational procedures capable of functioning even under the chaos caused by the adversary’s nuclear attacks. Given that even China has been worrying about the assuredness of its retaliatory capability vis-à-vis the United States, it must be extremely difficult for Pyongyang to achieve all of those requirements. And it is possible for the United States and its allies to prevent the country from having confidence on assuredness of its capability for a long while.

As Pyongyang continues its nuclear development, it has to endure international isolation and sanctions. Moreover, even acquiring an assured retaliatory capability will not enable Pyongyang to end this ordeal through nuclear compellence, since it doesn’t change the fact that its nuclear first-use will surely be met with devastating retaliation from the United States. We can afford to wait for the Kim regime to finally realize that its crown jewel cannot produce much strategic benefits as expected.

Why have we regarded Pyongyang’s acquisition of such a capability, which constitutes only a primary milestone in a quest for effective nuclear deterrent, as a game changer? One plausible reason is that, as Vipin Narang pointed out, a deep existential bias narrative established in proliferation studies has permeated our thinking. Under this bias, mere possession of even a few nuclear weapons is supposed to be enough to deter a stronger nuclear adversary, and therefore details of force postures or nuclear superiority are regarded as irrelevant. This line of thinking is often advocated by strategic communities of emerging nuclear powers like India and Pakistan, because it is useful to offset their stronger rival’s advance in nuclear development. Premised on this thinking, mere possession of a few nuclear ICBMs would enable the North to deter the superior United States.

We must escape from this narrative. This means not only correcting our perception but also making Pyongyang realize the limited deterrent effects its nuclear capability can bring about. It isn’t impossible. During the Cold War, superpowers pursued vast nuclear capabilities since they believed that details of force postures and nuclear superiority would be relevant to deterrence. Believing that to be basically true in the contemporary context, China, India and Pakistan have been expanding their arsenals beyond the level of existential deterrence. Moreover, the asymmetry in relative nuclear capabilities between Washington and Pyongyang is so large that it is reasonably conceivable that the former can adopt a functional damage limitation strategy, backed up by highly responsive nuclear counterforce capabilities, extensive missile defense systems, a real-time intelligence architecture, and the reserved right of nuclear first-use. Besides, unless North Korea acquires a functional damage-limitation capability against the United States, the outcome of nuclear exchange for the North must be a catastrophe, and whether its first move will finally result in that outcome hinges not on its actual capabilities, but on the U.S. perception of them.

Washington should make clear to Pyongyang the following: that the United States does not believe the North’s limited capability can function as an effective deterrent, and if Pyongyang should resort to an actual nuclear use, then Washington is prepared to respond and defeat the threat with its nuclear superiority, based on the conviction that the only expected outcome of the nuclear war would be a clear-cut victory for Washington and allies, with minimal damages incurred.

Combined with efforts to maintain the actual American nuclear superiority, conveying this conviction in an unequivocal manner makes it easier for the United States and its allies to address the decoupling issue. Decoupling means that North Korea’s nuclearization makes its aggression against South Korea or Japan more likely on the basis of believing that it can deter American intervention by threatening counterattacks on the mainland United States. Since the origin of this logic dates back to the NATO-WTO relationship, debates on how to address this issue have already begun. For example, the solutions of the Cold War era include deploying tactical nukes or strengthening alliance coordination.

Given that the United States and NATO basically succeeded in preventing the aggravation of this issue in the context of its rivalry with the superpower Soviet Union, such approaches are promising. But, in addition, we have to break the premise of decoupling through the above mentioned signaling. After all, the United States doesn’t have to sacrifice New York to protect its allies as long as it has a functional damage limitation strategy against the North. Hence, escaping from the existential bias can make it easier for the United States to deter and defeat North Korean aggression against South Korea and Japan.

Even if North Korea should eventually acquire an assured retaliatory capability against the United States, the decoupling would not be so acute in the higher end of the escalation ladder (like deterring nuclear attacks), given the forward presence of the U.S. troops and the potential implication of the deterrence breakdown to other U.S. commitments—as well as above mentioned solutions. Rather, a more likely threat is limited violence under the nuclear umbrella, which is known as the stability-instability paradox. That means that as a result of mutual nuclear deterrence taking effect, the conventionally stronger side can’t flex its military muscle any longer for fear of nuclear escalation, which in turn enables the weaker side to actively engage in low-intensity violence. Provocation at the lower rungs of the escalation ladder is supposed to occur even before the weaker side achieves an assured second-strike capability.

However, this concern is puzzling. When Glenn Snyder first presented the logic of this concept in 1965, his concern went in the opposite direction. He pointed out that, due to mutual nuclear deterrence between the United States and the Soviet Union, the nuclear forces on both sides canceled each other out, which would enable the conventionally superior Soviet Union to resort to conventional aggression without fearing the response of the United States and NATO. Applying this logic to the U.S.-North Korea equation, even if the North acquired an assured retaliatory capability, the nuclear capabilities of both sides would cancel each other out, and the North would fear the U.S. conventional threat. So, the question is why the perceived arrangement of the paradox has reversed and we have come to fear the weaker side’s low-intensity violence under the nuclear umbrella. It is this rearranged narrative on the paradox that has also amplified the perceived implication of the North’s nuclear capability.