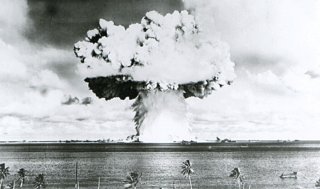 Just as we’ve had to discard business-as-usual thinking to deal with the current worldwide health emergency; it’s time to get serious about the spread of nuclear weapons. It doesn’t have the immediacy of the coronavirus, but it will last a lot longer and is no less threatening. In particular, we need to fortify the Nuclear Nonproliferation Treaty (NPT), which is fifty years old this year and badly needs fixing. The April 2020 Review Conference will likely be postponed, which provides time to develop something more than the usual charade of incremental proposals that nibble at the problem.

What needs fixing? Five problems: The NPT allows withdrawal on three months notice; it does not bar the use of nuclear explosives as fuels; its inspection arm, the International Atomic Energy Agency (IAEA), is too much involved in promoting nuclear energy; it lacks an established enforcement system, so each violation requires an improvised response; and it is undermined by the holdouts—India, Israel, North Korea, and Pakistan—thumbing their noses at the treaty. International lawyers may scream, but we need to make it essentially impossible to exercise the NPT’s withdrawal provision. This is vital because the member states’ safeguards agreements with the IAEA remain in force only so long as the states remain parties to the treaty.

A country should not be allowed to gather the wherewithal for a bomb while a member and then free itself of its treaty responsibilities by announcing its withdrawal. It shouldn’t be allowed to leave the treaty with technology, imported or indigenous, it obtained as a member, because it did so with the forbearance of other members on the assumption that it was doing so for peaceful uses.

There has to be a wide safety margin between genuinely peaceful and potentially military applications to make it impossible to surprise the world with a bomb. The oft-cited “inalienable right” to “nuclear energy for peaceful purposes” in the NPT’s Article IV has to be interpreted strictly in terms of the treaty’s overriding objective expressed in Article I (nuclear weapons countries can’t help others get bombs), and Article II (non-weapons countries can’t get them, period). That’s a long way of saying no commercial use of highly enriched uranium or plutonium, which today has no economic justification.

Another relic embedded in the NPT and the IAEA Statute is their promotion of nuclear power. With mind-numbing regularity, IAEA officials argue that accommodating countries on nuclear energy technology helps to gain their assent to control measures. But this approach weakens the NPT by creating a zero-sum game in which nonproliferation obligations of the many members are held hostage to technology sharing by the main supplier states. Unfortunately, too many members want dangerous technologies. That is not all. The agency’s singling out of nuclear energy as the anointed energy source leads to a misallocation of economic and scientific resources in countries that can’t afford it.

In the initial years of the NPT, there was an implicit assumption that the Western states and Soviets would police their spheres. But now, with the Cold War over, the NPT needs an established enforcement mechanism to deal predictably with violations, instead of each instance requiring improvisation by the leading members. The logic of “safeguards” assumes rapid international reaction, but experience shows it is more often measured in years. It is vital that would-be bombmakers be disabused of any notion that they could evade tough international sanctions. We need a country-neutral, reasonably predictable, more-or-less automatic sanction regime that puts all countries on notice, even friends of the powerful. A permanent secretariat attached to the treaty would help. Finally, it undermines the treaty when a non-member is used to enforce it, as when the United States acquiesced in Israel’s 2007 bombing of Syria’s clandestine reactor, instead of involving the IAEA, or when it cooperated with Israel in sabotaging Iran’s nuclear program.

The most difficult issue is what to do about the three NPT holdouts—India, Israel, and Pakistan—and the member-in-violation, North Korea. The drafters’ intent to only recognize five nuclear states was to first make sure that number did not grow larger while treating reductions among the five separately. To add new nuclear weapon members in addition to these five would undermine the treaty. However impossible it may now seem, the only way that all states can be brought under the NPT system is if all commit themselves to reduce their nuclear weapons to zero. The United States and Russia have made substantial reductions, but the continuation of that process requires all nuclear states to join in further cuts.

Towards this end, we would universalize the treaty—that is, regard it as applicable to all states. The three holdouts would then be in non-compliance. Of course, as a legal matter, you cannot force a country to join a treaty. But if the 190 NPT members so decided, they could treat the three holdouts, and North Korea, as countries in non-compliance, with appropriate disadvantages that would follow from that. At the same time, if these countries joined the weapons reductions process under adequate monitoring, they could be considered as approaching compliance, and disadvantages could be moderated.

This much is clear: Incremental, least-common-denominator steps are never going to get us to where we need to be, and serious people responsible for security know it. To cope with proliferation hazards in the face of weak international controls over nuclear programs, the world seems to be slipping—witness the case of Iran—into relying on greatly increased national intelligence operations backed up in the last instance by bombing and even assassinations. It is difficult to imagine that this is a workable solution for the long term.

To stop the further spread of nuclear weapons, we have to stop downplaying the NPT. Instead, we should strengthen and use it.

Victor Gilinsky is a program advisor for the Nonproliferation Policy Education Center (NPEC) in Arlington, Virginia. He served on the Nuclear Regulatory Commission under Presidents Ford, Carter, and Reagan.

Henry Sokolski is executive director of NPEC and the author of Underestimated: Our Not So Peaceful Nuclear Future (second edition 2019). He served as deputy for nonproliferation policy in the Cheney Pentagon.