Nuclear War Is No Longer "Unthinkable" for Russia 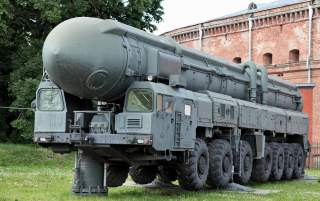 The newly-released "Foreign Policy Concept" of the Russian Federation contains some interesting changes and updates. Given that this document reflects the Kremlin's strategic mindset and how it views international relations, it is important to take what is says seriously.

The fact that the strategy was being prepared in parallel with the U.S. presidential election is perhaps not accidental given two of its most noticeable features. The first is a slight but significant shift in assessing the possibility of the use of nuclear weapons from "unthinkable" to "unlikely." While the concept does not anticipate a high probability of a nuclear exchange occurring, it does warn that the risk of crises escalating between nuclear-armed states is increasing. The second is a very loud and clear restatement of classic Westphalian principles of how states should interact with each other in the international order: on the basis of absolute "non-interference in one another's internal affairs." Should a country not wish to operate from that principle in its relations with Russia, Moscow reserves the right to utilize harsh retaliatory measures to any perceived unfriendly actions.

Perhaps the expectation in the Russian Foreign Ministry was that Hillary Clinton was on track to win the White House. Those two elements, in particular, seemed designed to send a clear warning to Washington that Moscow would brook no interference in its domestic affairs on the basis of any U.S. adjudication of failures in democratic practices or human rights observances. Russia learned from its momentary lapse in 2011, when appeals to the humanitarian principle of the "responsibility to protect" caused Russia to abstain from a United Nations Security Council resolution authorizing the creation of safe areas for rebellious Libyans. Moscow is determined that this not be repeated in the future, especially if such authority is used not to send forces to patrol refugee camps but to engage in active military operations against the offending government. It also reflects a growing Russian unwillingness to accept Western claims that internal repression by a government seeking to retain its power automatically constitutes a threat to regional peace and stability and justifies international action. Russia thus signals to itself and to other regimes that it stands by the principle that a government has the right to take action to defend itself against threats to its rule — both internal and external — and that it wants to raise the cost of Western-sponsored regime change whenever possible.

The change to the assessment about nuclear war reflects a growing consensus among experts that indeed that risk is growing. But it also fits with a pattern displayed by Russian president Vladimir Putin to warn the United States to back off. After the annexation of Crimea in 2014, Putin used the metaphor of the spring to suggest that ongoing, consistent Western pressure on Russia's frontiers had finally produced a reaction. Even if a nuclear exchange is "unlikely," the Russians are noting that if relations between Russia and the West continue to spiral downward, it is no longer out of the realm of possibility.

But this document is now released in the context of a Donald Trump transition to the White House. During the campaign, the candidate and many of his surrogates suggested that Hillary Clinton would end up provoking World War III with Russia by miscalculating and pushing the Kremlin too far— perhaps by trying to enforce a no-fly zone over Syria that resulted in the destruction of Russian aircraft, or ending up in a clash over the Baltic States. He also, at times, suggested that U.S. foreign policy ought to move back in the direction of less interventionism and involvement in the affairs of others. Humanitarian intervention does not appear to be high on the foreign policy priorities of the new administration, while finding ways to decrease tensions with other major powers, or at least with Russia, has been proposed.

So it will be interesting to see whether the new U.S. administration picks up on these signals as part of its own review of the U.S.-Russia relationship. Compromising on or scaling back on a number of past bipartisan policy approaches—notably the continued enlargement of NATO—in order to decrease pressure on the “spring” might resonate with the new chief executive. Focusing a relationship on "hard" security matters (starting with preventing nuclear conflict) rather than on Russia's progress with democratization would revert U.S. policy back to a  pre-1991 standard and reverse the insistence that has guided U.S. policy since that time that how Russia is governed internally is of vital national security interest to the United States.