Nuclear Weapons, China, and a Strategic Defense Initiative for this Century 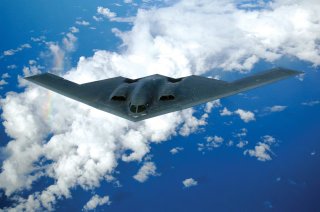 Kahn forced American strategists, our military, and our political leaders to confront issues that are supremely important, but, in equal measure, repellent. Unfortunately, we have no choice but to confront our nation’s strategic threats and options.

At Los Alamos in 1946, Dr. Louis Slotin placed pieces of fissile material near each other to calculate critical mass. Slotin died from a fatal dose of radiation.

The People’s Republic of China is conceptually engaged in the same exercise by radically expanding its nuclear forces while engaging in unprecedented bellicosity. China is tempting the boundaries of critical mass in its geostrategic intentions, gambits, and forays. In this, China exceeds the threats posed by Russia, Iran, or the Democratic People’s Republic of Korea.

Vladimir Putin seeks global relevance for Russia, through parlays involving its military strength or through its dictatorial energy policies. Chinese President Xi Jinping, however, seeks global dominance in a world he seeks to control through the Chinese Communist Party (CCP). China’s economy eclipses Russia’s, being an order of magnitude larger: China’s gross domestic product (GDP) is second only to America’s.

With callous and unbridled ambition, President Xi seeks to mold the existing world order into a system of global governance controlled by Communist China through its prophesied future supremacy in all forms of international power. China, therefore, represents the greatest threat that America has faced in the modern era, for no other nation that has contested the United States has possessed China’s relative economic power or population.

As secretary of state, in London, on January 30, 2020, I called the Chinese Communist Party “the central threat of our times.” China today epitomizes an unmatched danger to the free world. In the wake of COVID-19, the NATO alliance and the leadership of many nations comprehend the Chinese threat, having embraced my assessment due to revealed facts.

China is tempting global catastrophe in its ill-administered gain-of-function experiments that could release another deadly pathogen; in its taking Hong Kong; in its threatening Taiwan; in its building militarized, artificial islands in the South China Sea; and in its testing of a new class of nuclear-capable weapons, its orbital hypersonic glide vehicles (HGV).

The enhancement of America’s nuclear deterrent is essential, for it must continue to be resilient and be capable of coping with reductions in warning that could arise from technological or doctrinal innovations. China’s orbital hypersonic missiles, which can carry nuclear warheads, are a grave threat to world peace in that they have the potential to limit strategic warning. The diminution of strategic warning could escalate the risks of global nuclear war, due to miscalculation.

In this, and in so many other matters, China is acting in a manner contrary to the most basic of human objectives and expectations. Harnessing the might of emergent technologies, new media, and coercive forms of manipulation and censorship, defined as sharp power, China manifests a belligerent form of historical and geopolitical revisionism, which it directs against America and other countries it seeks to dominate or usurp, including many of its neighbors in the Indo-Pacific region.

Bernard Brodie, who preceded Herman Kahn as one of America’s foremost nuclear strategists, in part framed our conception of nuclear weapons in terms of deterrence. The concept of deterrence may be defined as the prevention of aggression due to the fear of unacceptable counteraction. It is to avert armed conflict by the establishment of the certitude that any first strike by a belligerent force will be unsuccessful in its aims and be disastrous for the aggressor.

Meaningful, stabilizing strategy must pose a convincing deterrent composed of survivable strategic systems, which are complementary, for deterrence is a function of the credibility of a nation’s armed forces as seen by an opposing state. To deter effectively, we must be capable of posing accurate and certain counteraction that is unacceptable to an adversary, given its beliefs, values, and intentions.

American nuclear policy is a product of presidential directions to the Departments of Defense and Energy. It is also a product of our strategic forces in being as well as their technology, accuracy, yield, and readiness.

The budgetary atmosphere, Congress, and prevailing strategic philosophies, held by our country and by potentially belligerent states, combine with geopolitical events and intelligence assessments to define threats, costs, opportunities, and programs. A strategic doctrine, to be relevant, must codify the strategic forces and threats at hand as well as those that may evolve.

In the aftermath of 9/11, a new articulation of American strategy might have checked our enemies more successfully than any single military action if we had clearly stated that what such extremists hold most dear, their domains, redoubts, and means of support, would be devastated by us, in response to any future terrorist use of a weapon of mass destruction. A coherent strategy for the post-9/11 world was not developed. Our country and our brave servicemen and women have paid dearly for this abrogation of the core responsibility of national leadership.

This is a domain that must be navigated with precision and strength. President Ronald Reagan in his March 23, 1983, defense address proclaimed a profound shift in American nuclear strategy with these words, “Wouldn’t it be better to save lives than to avenge them?”

Defense is different than deterrence, though it should enhance it. Defense is to pose effective interdiction once confrontation is apparent; it is to oppose an attack.

Simplicity is often its own reward. A modern strategy for addressing the threats we now confront must be conceptually similar to Reagan’s Strategic Defense Initiative and draw from the lessons it conveyed. It must also maintain the sufficiency of our triad and apply technologically advanced answers to the array of new threats we face.

The announcement of this program by President Reagan rendered the USSR’s strategic missiles essentially useless as accepted and enduring measures of national power or intimidation, for their vaunted military utility would be diminished, and thus uncertain, as the United States deployed defensive systems. This drove the Soviet Union into a technological race that helped ensure its demise.

Are there strategic policies and choices that can be enunciated that would help neutralize the nuclear threats posed by China, Russia, or other potentially belligerent states? Certainly, a precisely articulated strategic doctrine is needed to combat America’s present lassitude. Thus, proper doctrinal choices are compulsory and will be of immense benefit to world stability and peace, whereas choices made through the opaque lens of puerile narratives will invite disaster.

Though Russia’s and America’s present nuclear capacities are far greater than China’s, China is arming itself at an unparalleled pace, building hundreds of intercontinental ballistic missile (ICBM) emplacements. These are in addition to China’s formidable ballistic missile submarine (SSBN) force and its development of a stealth bomber, which is expected to be capable of carrying nuclear missiles.

Faced with an adversary that possesses wealth almost equal to our own, America must innovate constructively if it is to preserve an implacable deterrent posture against China, Russia, Iran, and the Democratic People’s Republic of Korea. A Strategic Defense Initiative for our time, the SDI II, which should exemplify President Reagan’s vision of defense in depth, is mandatory.

In expectation of the Biden administration’s soon-to-be-released Nuclear Posture Review (NPR), we must be concerned that if the weakness manifested in this administration’s disastrous withdrawal from Afghanistan be repeated, our homeland’s safety will be placed in grievous jeopardy. The often-proposed substitution of imagined arms control accords for nuclear capabilities is neither acceptable nor wise. Such pablum will be viewed by our adversaries as American fragility and thus as an inducement for caustic adventurism.

The new review is the fifth since this process was established in 1994. Since then, reviews were undertaken every eight years, to promote continuity.

The Biden administration broke this established precedent by rejecting this time interval, for the Trump administration conducted a comprehensive NPR in 2018. That review charted a prudent course for updating America’s triad to support deterrence. The administration, which I served, rejected insincere arms control posturing while pressing for substantive and verifiable accords to include China.

Of concern, too, is the Biden administration’s Missile Defense Review (MDR), expected in 2022. It should address emergent threats in its consideration of anti-ballistic missile (ABM) systems. It needs to be complementary to the NPR and should note areas of overlapping concerns.