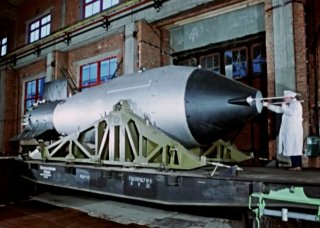 The Democratic Party platform states that Democrats believe that the “sole purpose” of U.S. nuclear weapons should be to deter and—if necessary, retaliate against—a nuclear attack. Presidential candidate Joe Biden has said the same. The sole purpose would mark a significant change in U.S. nuclear policy, eliminating ambiguity that preserves the option to use nuclear weapons first in response to a conventional attack. Adopting the sole purpose is a sensible step that would foreclose an option that no president has ever chosen . . . or ever would.

The U.S. government has long taken the position that it would use nuclear weapons only in “extreme circumstances” in which the vital interests of the United States, its allies or partners were at stake. That formulation leaves ambiguity as to whether an American president might in some cases decide to use nuclear weapons first. Indeed, it explicitly preserves that possibility.

When the Soviet Union and Warsaw Pact held large numerical advantages in conventional military forces during the Cold War, U.S. and NATO officials maintained an explicit option for deliberate escalation to nuclear weapons in the event of a conflict where they were losing at the conventional level. That might have contributed to the deterrence of a conventional conflict, but such escalation would have entailed enormous risks: once the nuclear threshold was crossed, where would matters stop? Many analysts question the ability to control escalation once nuclear weapons enter into use. As reported by Fred Kaplan in The Bomb, in 2017, Secretary of Defense Jim Mattis asked a group of senior Pentagon officials if they believed that nuclear war could be controlled; only one thought that it was possible.

The Obama administration’s 2010 nuclear posture review sought to reduce the number and role of nuclear weapons in U.S. policy. The document stated that “the United States will not use or threaten to use nuclear weapons against non-nuclear weapons states that are party to the NPT [Non-Proliferation Treaty] and in compliance with their nuclear non-proliferation obligations.” If such a non-nuclear weapons state attacked America or an American ally or partner with conventional, chemical or biological weapons, this negative security assurance meant that the U.S. military response would not be nuclear. (The review did contain a footnote to the effect that developments in biological weapons might lead Washington to revisit the negative security assurance.)

The 2010 nuclear posture review also stated that the United States would resort to nuclear weapons only in extreme circumstances and that the “fundamental purpose” of U.S. nuclear arms was to deter a nuclear attack on America, its allies or its partners. That language left open the possibility of a nuclear response to a conventional attack by a nuclear weapons state or another country not covered by the negative security assurance. The review added that the United States would “continue to strengthen its conventional capabilities and reduce the role of nuclear weapons in deterring non-nuclear attacks” with the goal of making deterring nuclear attacks the sole purpose of the U.S. nuclear arsenal.

The Trump administration’s 2018 nuclear posture review reflected continuity with its predecessor in some ways but diverged in others. Instead of reducing the role of nuclear weapons and rejecting new nuclear weapons, the 2018 review called for new “supplemental” nuclear capabilities: a low-yield submarine-launched ballistic missile warhead and low-yield warhead for a sea-launched cruise missile. While reiterating that the United States would use nuclear weapons only in extreme circumstances, the review said that those circumstances included “significant non-nuclear strategic attacks” on U.S., allied and partner civilian populations, U.S. and allied nuclear forces, nuclear command and control systems, or warning and attack assessment capabilities. Many observers believed that the language broadened the circumstances for nuclear use, at least compared to Obama administration policy, particularly given President Donald Trump’s threats, some veiled and others more explicit, to use nuclear weapons.

The Obama/Trump negative security assurance covers 95 percent of the nations in the world. The possibility of the United States using nuclear weapons relates to just a handful of countries: nuclear weapons states and countries which Washington judges not to be in full compliance with their nuclear nonproliferation obligations (only Iran and Syria are thought of in this context). The countries of greatest relevance boil down to Russia, China and North Korea.

Of the two major potential adversaries, China has long had a declared policy of no first use of nuclear arms, though some question whether Beijing would abide by this declaration in all scenarios. Russian declaratory policy states that Russia would resort to nuclear weapons only if nuclear or other weapons of mass destruction were used against Russia or a Russian ally, or if there were a conventional attack on Russia that put the existence of the state at stake.

What scenarios might lead to U.S. consideration of nuclear first use? One could be a conventional NATO-Russia conflict in the Baltic region in which the Russian military attains or is on the verge of attaining victory given its regional advantages. NATO overall has more powerful conventional forces, but marshaling them would take time. In this scenario, would an American president really decide to launch a nuclear attack on Russian forces on a NATO member’s territory or Russia itself? He or she would have to weigh the high probability of nuclear retaliation, including against the U.S. homeland. The president almost certainly would set aside the nuclear option, opting for time to build up American and NATO conventional forces for a counter-offensive.

Another scenario could involve a conflict with China in which the Chinese military, using its large arsenal of conventionally-armed ballistic missiles, pushes back U.S. naval and air forces. How successful a Chinese offensive might be given the spectrum of U.S. conventional capabilities, perhaps augmented by those of U.S. allies, is unclear. However, going nuclear would mean striking China directly. Again, the president would have to consider the very real prospect that Beijing would respond with a nuclear attack against American military bases in the Pacific, such as Guam, or against the United States. Again, he or she almost certainly would look for conventional options, even if they would take time.

The Trump administration’s nuclear posture review raised another scenario: a significant non-nuclear strategic attack. Say that Russia launched a cyber strike on the U.S. electric power network, bringing down most of the grid from Boston to Washington, DC. That could prove a calamity, but would a U.S. president conclude that using nuclear weapons against the attacker, and then absorbing a nuclear counter-attack, would improve the situation? No, he or she almost certainly would order conventional and cyber counter-strikes, especially if there was the slightest doubt about correctly attributing the attack—a real question in the murky cyber world.

As for North Korea, if struck first by U.S. nuclear weapons in a conflict, is there any doubt that Kim Jong-un would strike back with his nuclear arms?

Escalating a conflict by introducing the use of nuclear arms is a scary, if not terrifying, proposition. It entails opening a Pandora’s box of unpredictable and potentially catastrophic consequences—especially when U.S. nuclear weapons would be used against a country that could strike back with its own nuclear arms.

Those opposed to the sole purpose argue that the current ambiguity about U.S. readiness to use nuclear weapons first contributes to the deterrence of adversaries and the assurance of allies. That is a serious argument, but it made far more sense during the Cold War when the choice that might confront U.S. and NATO leaders was to use nuclear weapons or lose the war. Maintaining that ambiguity carries risks. Given the prospect of nuclear escalation once any nuclear weapons are used, and the changes in conventional force balances over the past thirty years, the chance that an American president would choose to use nuclear weapons first is vanishingly small. In virtually every conceivable scenario, he or she would look for other options, since the likely nuclear retaliation for a first-use effort by the United States would inevitably turn a bad situation into something much worse.

Does it make sense to continue a declaratory policy aimed at deterring adversaries and assuring allies and partners that, on serious examination, neither foes nor friends would find credible? As America’s allies and partners see the U.S. threat to use nuclear weapons first lacking credibility, that could undermine their confidence in the U.S. threat to use nuclear weapons in response to a nuclear attack on them.

Eliminating the ambiguity by adopting the sole purpose might not provide a huge security bonus, but it would have a positive security impact. Russia likely would not follow, at least not in the near term. However, the change could help defuse the current situation, in which both Washington and Moscow believe that the other seeks to lower the nuclear threshold and thus is adjusting its own nuclear policy accordingly. It is not in the U.S. interest that the Russians believe America might go nuclear first and develop (or further develop) a posture to beat Washington to the nuclear punch. That fosters conditions that could be very dangerous in a conventional crisis or conflict and make nuclear use more likely.