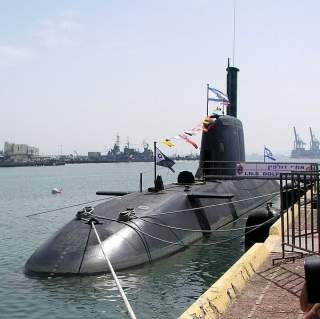 In a few months, the fifth “Dolphin” submarine will leave Germany and enter Israeli service. A sixth boat will arrive by 2017. Under normal circumstances, a force of six modern diesel-electric submarines would represent a large, but not outlandish, undersea commitment on the part of a country of Israel’s size and wealth. But the Dolphins apparently play a much larger role in Israel’s self-defense plans; reports indicate that they will carry a portion of Israel’s nuclear deterrent, in the form of nuclear-armed, submarine-launched cruise missiles (SLCMs). Theoretically, this gives Israel the third leg (after ballistic missiles and fighter-bombers) of the nuclear triad. But do the Dolphins provide a practical deterrent?

The Boats and Their Missiles

Israel is not the first country to attempt to manage its subsurface nuclear deterrent with conventional submarines. Early Soviet ballistic-missile submarines relied on conventional propulsion, as did the earliest Chinese prototype missile sub. However, conventional subs have distinct disadvantages relative to their nuclear kin in deterrent missions. Most importantly, they lack the range to remain on station for extended periods of time without access to supply tenders or friendly bases. This makes the submarine vulnerable to attack, potentially as part of a policy of preemption. It also means that fewer subs can conduct deterrent patrols at any given time, making the task of anti-submarine forces considerably easier.

The history of the Dolphin class is relatively well known. The first three boats (delivered starting in the late 1990s) were developed from the ubiquitous German Type 209 class, although with longer hulls and a larger displacement. The second three boats (the first of which was delivered just recently, with the next two arriving before 2017) more closely resemble the German Type 212. Germany donated the first two boats to Israel, partially in recompense for German assistance with Iraq’s chemical-weapons and ballistic-missile programs.

The Dolphins’ conventional mission is the same as any other submarine. The boats are expected to patrol Israeli waters and other areas of conflict, and have an array of weapons suitable for both anti-submarine and anti-surface warfare. They can also deliver teams of special operators, and conduct conventional cruise missile strikes on land targets.

This last capability has created the greatest discussion with respect to these boats. The Dolphins reputedly carry a version of the Popeye Turbo cruise missile. An appropriately modified version of the Popeye missiles could potential strike targets at a range of up to 1500 km and can carry nuclear warheads.

Theoretically, this gives Israel the chance to strike Iran from boats operating in the Mediterranean. But Israel would need to overcome several technological hurdles in order to conduct a strike at such ranges. Charting a course for nuclear-tipped cruise missiles across 1500 km and four countries is a major technical challenge. Flying a cruise missile over featureless ocean for the same distance isn’t such a problem, but a missile flying over land needs to constantly correct for terrain and altitude. Moreover, the Popeye Turbo is subsonic, which means that it could take more than two hours to reach its target, depending on its launch location. This gives any foe a fair amount of time to mobilize its air defenses and attempt to shoot the missile down on the way.

Of course, everything would be easier if the subs could launch their weapons from the Persian Gulf, and indeed some Israelis have claimed that the subs are regularly on station in the Gulf. But basing remains a problem. The IDF’s primary submarine base is at Haifa, on the Mediterranean. Under normal circumstances, Israel can transit the subs from the Mediterranean through the Suez Canal. In conditions of tension or hostility, however, this puts a portion of the Israeli nuclear deterrent at the whim of an Egyptian government that may express reluctance to facilitate the nuclear destruction of an Islamic country.

The submarines could potentially operate out of Eilat (indeed, the IDF has already conducted some operations in the Red Sea), but this is hardly ideal from the point-of-view of nuclear deterrence. If Israel’s survival depends on a single small base in a relatively inaccessible location, then that base becomes a target for preemptive attack. Presumably, Israel could put submarines to sea as tensions increased, but diesel-electrics can only remain at sea for so long. Simply transiting the submarines out of the Red Sea under war conditions would be a hazard, especially since every country in the region would appreciate their true purpose.

Israel may have plans to pre-arrange resupply with friendly countries, but those arrangements could easily collapse under wartime pressures. How many governments in the region want to go down in history as the state that facilitated a last-ditch Israeli nuclear strike? Even the United States might blanch at appearing to have facilitated an Israeli retaliatory nuclear strike after the end of primary hostilities. Getting the submarines into firing position by taking the long route (around the Horn of Africa) would also be a struggle, as they would require either stops at friendly bases or access to pre-positioned supply ships.

Use of the Dolphins in a nuclear-deterrent capacity would (if they operate anywhere but the Med) subject them to Iranian anti-submarine warfare assets. Iran’s capabilities in this regard are limited. The Iranian Navy’s few old frigates can’t reliably track the Dolphins, and Iran doesn’t have any modern maritime patrol aircraft that could detect the approach of the Israeli subs. The three Iranian Kilo class submarines could cause problems, but without better capabilities for long-range detection, they’d only find the Dolphins by a wild stroke of luck. That said, stationing the subs in the Persian Gulf maximizes the chance that Iran could find and destroy them in a crisis.

We simply don’t know enough about how Israel intends to use its submarines as a nuclear-deterrent force. Much of our information comes from pro-Israel pundits who firmly believe that Israel needs a nuclear deterrent, and that therefore we ought not ask too many difficult questions about the details. A similar attitude has made frank conversations about the effectiveness of the Iron Dome system difficult.

Every submarine deterrent is a bluff; no country wants to experience an event that would make it necessary to fire a nuclear weapon in revenge. But for every other country, the mechanism of the bluff is fairly simple, with hidden submarines launching virtually unstoppable ballistic missiles from huge distances with little warning. For Israel, the operational problems are far more significant. The Dolphin is an exceedingly tenuous bluff, more of a last, desperate gamble for revenge than a cold, calculating mechanism for destruction.

There’s no question that having submarines capable of launching nuclear-armed cruise missiles enhances the credibility of Israel’s deterrent, at least at the margins. The questions involve precisely how marginal that increase is, particularly in the context of the costs of weaponization, training and operation, and the risks of a nuclear accident. The United States, Russia and every other country that deploys its deterrent on subs have worked for years on safety procedures that prevent the accidental loss or release of nuclear weapons—and yet they still have accidents.

Do the Dolphins provide Israel with a credible second-strike deterrent capability? No, not by the standards of every other submarine deterrent force. The obstacles are too numerous to think of the Dolphins as representing the same sort of “dead hand” retaliatory capability that we associate with other sub forces. Israel has other, more capable and more survivable means of retaliating against Iran, or even launching a first strike. At this point, the Dolphins amount to “security theater,” an effort to convey the image of additional protection without actually providing much in the way of defense.