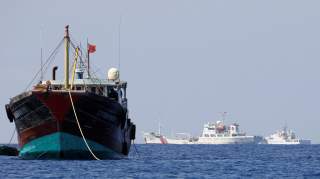 Thus far, China has been winning in the maritime “gray zone,” with no sign that opponents—including the United States—are willing to fire on its second and third sea forces to render them critically vulnerable. In peacetime today, therefore, numbers matter at sea. And China has the numbers on its side. It matters that each of China’s three sea forces has the world’s most ships. Chinese doctrine recognizes this, and China’s cost-effective shipbuilding industry enables it to capitalize on this. Numerical superiority allows China’s second and third sea forces to flood the maritime gray zone in ways that its neighbors, as well as the United States, may find very hard to counter. Understanding this challenge confronting maritime East Asia is a crucial first step in addressing it. But far more is needed, and fast. The waves of history are relentless, and wait for no one.

Furthermore, as the second article in this series will discuss, China’s first sea force—its navy—is achieving some superior numbers of its own.