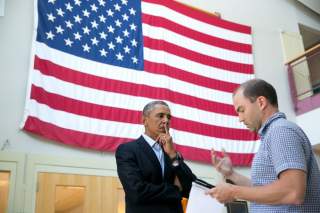 EVEN PRESIDENT Obama’s dwindling residue of faithfuls and retainers should not wager on his rewriting the history books in his closing two years. A presidency that began with lofty expectations has devolved into steadily defining them down, at home and abroad. The result has been prolonged paralysis.

At home, emboldened opponents of the White House are blocking spending on the crumbling physical and intellectual infrastructure necessary to stimulate a limping economy and to sustain U.S. power abroad. And while Obama inherited rather than caused many of the world’s current crises, his habitual complacency and passivity prevent him from mitigating or resolving them. Whatever he tries to do on the international front will be tethered by an unavoidable fact: his second-term team is not nearly as strong as his first, and the best among them are now departing. Most depressingly, the president’s almost pathological pattern of consensus building has hardened into concrete, and the interagency process is all about seeking the lowest common denominator. His priority, as far as possible, appears to be avoiding any kind of action abroad that might detract from his out-of-reach domestic agenda. In this context, it’s easy to see why he resists the kind of bold moves essential to fashioning success internationally. Obama flowers in abstract intellectual discourse, but has been defiantly oblivious to hardheaded strategy—plans on what can be accomplished and how. And strategy is the essence of power.

All that said, Americans cannot and should not abandon hope. At home, to be sure, the president is imprisoned in a Vietnam-like tiger cage. His only recourse remains executive orders, a useful device but not nearly enough on important legislative matters. Congress is frozen by the ideological fervor of the Tea Party and by the fear that it generates among moderate Republicans, who might otherwise be tempted to reason and to bargain. Obama may also be on the verge of watching the Senate turn Republican in the midterm elections. Thus, while he may pray for domestic accomplishments, Obama will clasp his hands in vain. Far better he should lift his gaze beyond America’s borders and become a foreign-policy president, an arena in which he can act decisively and effectively to inject some iron into an anemic record.

Even lackluster presidents can still act effectively in the international arena. It’s amazing, but true. Foreign leaders may damn and disdain the man in the Oval Office, but if they want to get anything done or to prevent bad things from happening, they scamper to the White House no matter what they may think of its current inhabitant. For all of America’s woes, for all of Obama’s failures, and for all the American power frittered away over the last two decades, friends and foes alike still look first and last to the United States in times of crisis. And the second decade of the twenty-first century is a time of crisis. Thus, the world remains Obama’s stage in his last two years.

Obama still has the time and the power to stop the terrorists about to lodge themselves in the Middle East, from whence they will threaten the rest of the world. But he must have a good strategy. He also has the opportunity to redefine two troubled and troubling strategic relationships: those with Russia and with the Asia-Pacific region. The first order of business, however, has to be the terrorists, and that will require something even more ambitious than Obama’s recent call for a coalition to combat the Islamic State. It will, in fact, require nothing less than the reinvention of America’s relationship with Iran.

SINCE THE 1979 revolution and hostage crisis, and more still since President George W. Bush’s preposterous “axis of evil” speech in 2002, Americans have singled out Iran as the locus of all evil. Indeed, Iran’s backing of terrorist groups like Hezbollah and Hamas, support for cruel despots like Syria’s Bashar al-Assad and antagonism toward Israel all justify Iran’s place on America’s most-wanted list. Add on top of this a secretive nuclear program and the memory of ghouls like former president Mahmoud Ahmadinejad, and you have a genuine security concern.

Lost in this tenebrous picture, however, is a deeper understanding of the Iran that is—and of the Iran that might be. Underneath a decade of demonization lies an incredibly complicated country, one with a proud linguistic, cultural and political tradition dating back millennia. By any measure, Iran is one of the oldest, most stable and most dynamic countries in the Middle East today. Its population is not nearly as anti-American as those of most of the Sunni Arab nations, and it holds elections, which, though far from perfect, are fairer and freer than those in most countries in the region. It elected President Hassan Rouhani, a palpable reformer. (Can you imagine a reformer being elected in Vladimir Putin’s Russia or Xi Jinping’s China?) Iran is changing in ways neither Americans nor Iranians themselves can fully grasp. That evolution is more likely than not to unveil our underlying strategic commonalities.

The driving force in Iran right now is the need for economic development. And while Iran can look to many places, it continues to stare first at Washington. It knows full well that only the United States can fully restore its economic standing internationally and that the U.S.-led sanctions regime has taken a heavy, but not decisive, toll. That’s the key to U.S. leverage, and economics is the core commonality between the two countries. It is not, however, their only common interest. The two sides also see the main threat in the Middle East basically the same way. It’s the Sunni jihadis who threaten the interests of both, and both believe those jihadis must be neutralized. Both also realize that finding a way to cooperate in this battle will be a tricky enterprise.

These common interests don’t end in the Middle East. In fact, Tehran’s interests coincide with Washington’s on almost every explosive issue in the world except Israel. The list includes Pakistan, perhaps the most dangerous and unstable nuclear power in the world, and Afghanistan, where Tehran and Washington cooperated until Bush, in a fit of hubris, made that cooperation impossible. The only serious conflict is over Israel, and even that should not be an insurmountable obstacle. Traditionally, Iran and Israel have not been foes. Quite the contrary. U.S. strategy, therefore, should be to use cooperation in other areas to ease Tehran’s hostility toward the Jewish state. The United States should be making a basic strategic decision to test whether Iran is prepared to act on its mutual interests with the United States.

Partnering with Iran would allow the West to bring major capabilities to bear on the most pressing threats both to Western security and to Iran itself. Consider the Islamic State. The first push by these crazed but crafty jihadis toward Baghdad and other key cities in Iraq and Syria has been halted in no small part thanks to tacit U.S.-Iranian cooperation. Iran’s drones have flown over Iraq without condemnation from Washington, the United States has armed the Kurdish peshmerga forces and bombed targets in Iraq without opposition from Tehran, and only the united front of American and Iranian diplomatic pressure could have removed former prime minster Nuri Kamal al-Maliki so cleanly after he repeatedly vowed to retain power.

It would be unwise to assume, however, that the halt of these extremists has been anything but temporary. They will stage their own surge unless the United States and self-interested “friends” deliver them a real body blow soon. Any coalition to do fatal damage to the Islamic State must include the Iranians and Assad’s Syria. They feel even more threatened by the jihadis than does the United States, and they can put the necessary boots on the ground in conjunction with American air power and, yes, American special forces, if need be. Other nations can and should be included. This is the time to forge such a coalition and to prove that the jihadis are a relatively small and vulnerable group, one whose bark is more potent than its actual bite—in essence, a terrorist group rather than a caliphate.

Cooperation on the ground in Iraq and Syria is one thing, but the key to any overall thaw with Iran is the interim nuclear agreement. President Obama’s opponents will continue to bellow and gibber that he is a credulous appeaser selling out American interests and pursuing a bad deal just so he can say that he achieved something. They assert that either Iran must capitulate totally or continue to endure crippling sanctions. They might as well demand the abolition of the Islamic Republic. It wouldn’t make any difference; such is the depth of these critics’ naïveté.

When Republican critics of the deal rant about “nuclear breakout capacity,” they willfully forget that Iran is already well on the way to a bomb. Without a deal, it is certain to acquire a nuclear-weapons capability at some point.

No one with any credibility is arguing that a final agreement with Iran would be a panacea to all of our problems with the regime in Tehran. And, of course, Iran might cheat, but it would be far easier for it to develop a weapon without the inspection provisions of the agreement. Its breakout time now is less than what it would be with a deal, and the alternative to one is bleak indeed. The West—and especially Israel—is clearly safer with the agreement than without it.