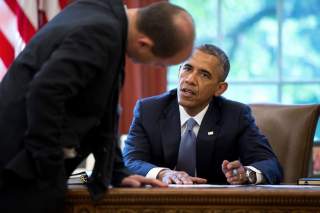 President Obama’s statement issued in the White House pressroom minutes after the announcement of the Ferguson grand jury’s decision not to indict officer Darren Wilson wasn’t just a botch. It was a tragic botch.

On the surface, the president sought to strike a measured and balanced tone, and he hit many of the right notes in his brief statement—to wit, we are a nation of laws, the decision was the grand jury’s to make, there is no excuse for violence, and so on and so forth. But in the course of his remarks, he denied seeking to do what he obviously was doing, which was using those tragic events in Ferguson, Missouri, as a springboard for a broader discussion on lingering problems in American race relations. In doing that, he undermined his own call for calm and negated his suggestion that we should bear in mind that “we are a nation built on the rule of law.”

There are two fundamental prisms through which to view the heart-rending story in Ferguson. The first is that it was a tragic episode in which an unarmed young black man, Michael Brown, lost his life in an altercation with a police officer and that the matter, like all such matters, had to be parsed and adjudicated through the local criminal-justice system. That meant waiting for all evidence to be gathered and weighed before rushing to judgment. It meant further that we ultimately must place our trust in the justice system, which certainly isn’t perfect, but it is all we have—and is likely to be carefully pursued particularly when it is under intense and emotional public scrutiny, as it was in Ferguson. Viewed through this prism, there is no call for conflating this delicate and difficult process with any broader national problems in race relations. In fact, it is inappropriately incendiary to do so.

The other prism presents a different picture, one that sees the Ferguson events as a reflection of a serious national problem of white racism within law enforcement and in the criminal-justice system. Viewed through this prism, Michael Brown’s death not only should bring an indictment against Darren Wilson, but represented an indictment against elements of American society. The two aren’t separable, in this view. Michael Brown didn’t get a fair break from the police officer during that altercation, and if Wilson wasn’t punished through the criminal-justice system, then that represents automatic evidence of something seriously wrong with the criminal-justice system. This is the underlying view of Reverend Al Sharpton and other agitators who use allegations of racism to whip up emotions in what President Obama calls “communities of color.”

These two views rendered by these two prisms have been clashing in Ferguson since the beginning, and everyone knew that when the grand-jury decision was announced, whatever it might be, that clash was going to become extremely intense. In such circumstances, presidents of the United States have a fearsome obligation to refrain from saying or doing anything that could intensify the emotions involved.

By conflating the events in Ferguson with ongoing problems of racism in America, Obama embraced the second prism and intensified the emotional situation in Ferguson, irrespective of all the disclaimers he carefully inserted into his statement. This is precisely what presidents of the United States should not do in such circumstances.

(You May Also Like: 5 Worst Presidents of All Time)

One crucial question here is whether Michael Brown’s fate was sealed by an underlying problem in American society or was the result, in significant measure, of his own actions. Another is whether the grand-jury decision was further evidence of racist sentiments lingering in the American body politic or a measured, conclusive examination of the evidence.

That’s what Obama did. “We need to recognize,”  he said, “that this is not just an issue for Ferguson. This is an issue for America.” He said the Ferguson events “speak to broader challenges that we face as a nation” and noted  “a deep distrust” between law enforcement and communities of color.

(You May Also Like: 6 Best Presidents of All Time)

Obama emphasized that “there’s never an excuse for violence, particularly when here are a lot of people of goodwill out there who are willing to work on these issues.” Then he added:

“On the other hand, those who are only interested in focusing on the violence and just want the problem to go away need to recognize that we do have work to do here and we shouldn’t try to paper it over. Whenever we do that, the anger may momentarily subside, but over time, it builds up and America’s isn’t everything that it could be.”

That was the crux of the Obama statement. If you don’t recognize problems in race relations and if those problems aren’t addressed effectively, then black people are going to get angry when events happen such as those in Ferguson, and those angers are going to erupt into violence. Thus did the president seek to put the onus on the country for any violence that erupted in Ferguson. In doing that, he actually placed some of the onus on himself.

If problems of lingering racism exist in America, then those problems should be addressed, and few Americans are better positioned to do so than Obama. But, if the Ferguson events can’t be attributed to racism, then they shouldn’t be used to spearhead discussions on any broader problem—and certainly shouldn’t be used in ways that could exacerbate racial tensions in Ferguson.

The president added to all this with his characteristic tendency to patronize people out in the country grappling with difficult situations, whom he seems to presume need his peculiarly sound counsel from a higher plane of wisdom. “I also appeal to the law enforcement officials in Ferguson and the region,” said the president, “to show care and restraint in managing peaceful protests that may occur….As they do their jobs in the coming days, they need to work with the community, not against the community, to distinguish the handful of people who may use the grand-jury’s decision as an excuse for violence. Distinguish them from the vast majority who just want their voices heard around legitimate issues in terms of how communities and law enforcement interact.”

Two points emerge here: First, since when do law enforcement officials in Ferguson or anywhere else in America need presidential admonitions to refrain from working against their own communities? Second, and more important, you have to wonder where Obama gets his idea that, when riots begin, law enforcement can carefully isolate out the violent ones while benignly countenancing peaceful demonstrations. The lack of realism here is stunning.

Even as the president spoke, the violence in Ferguson was reaching the level of a riot. “I really don’t have any hesitation in telling you that I didn’t see a lot of peaceful protest out there tonight,” said St. Louis County police chief Jon Belmar. At least a dozen buildings were set ablaze, and an estimated 150 gunshots were heard by the time the New York Times filed its first story on the violence. The Times quoted Tammy Ruffin, 54, a local resident “standing in stinging smoke that swept over her house,” as saying, “It’s horrible, horrible, horrible, horrible. I knew this was going to happen.”

It seems she knew something her president didn’t fully comprehend. What he also didn’t comprehend was that these incendiary situations out in the country call for caution and restraint on the part of presidents. By conflating events in Ferguson with broader matters of race relations, he attached himself, however unwittingly, to unfolding events in Ferguson.