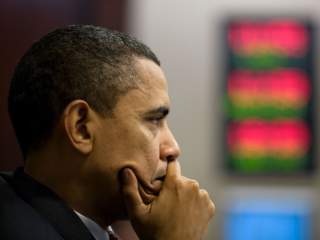 It is a testament to how deeply the doctrine of neoconservatism has left its mark on the American foreign policy that the Obama Doctrine, for all its professed restraint, has ended up in practice looking very similar to the gung-ho interventionism of the George W. Bush administration, with the main difference being the degree of intervention. While engagement with Iran and Cuba are victories for realism that would have been unthinkable during the Bush years, Obama has not shied away from unnecessary military action—action that does not improve the United States’ security situation or shore up the international order. In the past seven years Obama has, in addition to continuing to fight in Iraq and Afghanistan, conducted airstrikes to remove Muammar el-Qaddafi in Libya, conducted airstrikes against Islamic State in Syria, funded rebels fighting Syrian President Bashar al-Assad, supported Saudi Arabia’s air campaign in Yemen, and conducted extensive drone strikes in Pakistan, Syria, Yemen and Somalia.

Is it inevitable that anyone in the Oval Office will succumb to the tragic pressure to use the military to put out fires around the world? Or is there a way to uphold the United States’ role as defender of the world order without falling into the neoconservative morass of constant military intervention that by bleeding America dry of treasure and blood, will precipitate in not greater but lesser America security? President Obama himself got it right when he said that “we can’t, at any given moment, relieve all the world’s misery. . . we have to choose where we can make a real impact.”

This might be best accomplished by following the example of the British in the nineteenth century, whose role the United States has now assumed. Militarily, this would consist of three primary components: (1) maintaining American forces near key chokepoints, such as the Gulf of Hormuz and the Malacca Straits to ensure the freedom of the seas; (2) shoring up relations with close allies in prosperous and free rimland of western Europe and East Asia that give the international system global staying power; and (3) only using force to prevent any power from using armed force to seize enough territory and resources to threaten the world order. Most other countries, including other great powers, are disinclined to rock the boat and dispute this basic order, which provides enough space for most of their ambitions and internal arrangements.

Yet, instead of pursuing the very commonsense ideas he himself seems to advocate, Obama’s policy in the Middle East and North Africa has been a disaster, though he himself has acknowledged that he was dealt a bad hand to begin with. Mindless intervention, for no good purpose but to influence domestic arrangements in other states, has led to unintended consequences. Removing Muammar el-Qaddafi has left Libya an all-but-failed state and destabilized surrounding states like Mali. Half-hearted support for Syrian rebels has only contributed to the years-long stalemate. Yemen is fast becoming a second Syria, a humanitarian catastrophe affording terror groups free reign. These events are of no benefit to anyone.

Furthermore, Obama seems to believe that he should indeed accomplish the same things other politicians would accomplish with direct American intervention, just by using drones, airstrikes and proxy wars. This is really just business as usual, in another form. It is easy to abjure responsibility for instability, following regime change, in a country where American soldiers never stepped foot. Aircraft don’t take prisoners, so there is no need to worry about where to put detainees, or whether indefinite detention offends our liberal democratic ideals. The drone wars will leave no new Guantánamos for Obama’s successor. Most importantly, air, drone and proxy wars can be waged with relatively few domestic political restraints. Without the sight of flag-draped coffins returning home, the American public is remarkably uninterested in what is being done on its behalf.

Of course, wars with few barriers to entry are not necessarily wars with few consequences. While drone strikes and funding rebels can help topple an existing regime, they can't fill the power vacuum that results. To paraphrase a Mongol saying, you can conquer a country from the air but you can’t govern from the cockpit.

Drone strikes against a wide swath of the Muslim world, conducted with seemingly little regard for civilian causalities, provide a powerful recruiting tool for jihadists and set a dangerous precedent for other powers.

More promising, at least conceptually, is the “Pivot to Asia,” which would both disentangle America somewhat from the Middle East and serve as a model for a more successful foreign-policy plan. President Obama is correct in seeing Asia as a core interest in the way the Middle East—with barely 5 percent of the world’s population and economy—never was.  But the pivot goes much too far if the United States merely repeats many of the same policies it pursued in the Middle East in Asia. America ought merely to ensure freedom of navigation and the security of its main allies, and not get involved in every territorial dispute, question of sovereignty and domestic situation. It would be a pity if the United States simply took its ships, bases and bad ideas in the Middle East and swung them 180 degrees toward Asia, which would eventually repeat the mistakes of the Middle East in a far less forgiving environment.

Therefore it is with great trepidation that we view the so-called pivot to Asia. It would not be an escape from the chaotic politics of the Middle East, but a new chapter of intervention, domestic interference and competition with a regional hegemon (with China replacing Iran), which would lead to further and unnecessary American entanglements and petty obsessions over exaggerated security threats. Pivoting to Asia should mostly be economic and political, not military.

Obama came to office promising end the reckless interventionism of the Bush years. Yet for all his talk of using U.S. military power judiciously, the Obama Doctrine turned into a failed attempt to continue interfering in the Middle East through the seemingly less costly means of air power and proxies. One can only hope that if he or his successor actually manages to pivot to Asia, they will not repeat the mistakes of the Middle East. The U.S. military cannot be used to solve all the world’s problems, and it falls on the president to resist the temptation to try.

Lisa A. Bergstrom is a technology and security specialist with expertise in nuclear proliferation, conventional weapons policy, and Russian studies. She also received her Master of Arts in Security Studies from the Edmund A. Walsh School of Foreign Service at Georgetown University, where she concentrated in technology and security.