Obama, LBJ and the Primacy of Domestic Politics 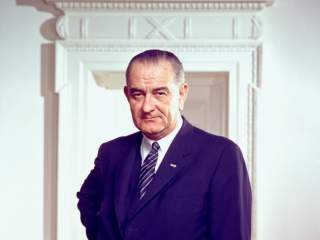 Fifty years ago this week, President Lyndon Johnson gave his third State of the Union address before the U.S. Congress. His speech largely focused on Vietnam, where over 200,000 American troops were then engaged in the war to defeat communism in Southeast Asia. Like President Obama today, LBJ saw himself primarily as a domestic reformer, not a war president, and so it was somewhat challenging for him craft a political message that blended his ambitious plans for a “Great Society” at home with the reality of his costly maneuvering abroad.

When he gives his final State of the Union Address this Tuesday, President Obama will have no such apparent contradiction to grapple with. For despite being faced by major global crises—including ones that some insist are bona fide threats to U.S. national security—Obama has consistently avoided the temptation to invest heavily in international affairs as a way to mollify domestic critics. This is a good thing, of course, in the sense that nobody ought to wish for a president to pursue costly foreign endeavors in service of a domestic agenda. But despite his studied conservatism in foreign policy, it is still far from obvious that Obama will avoid LBJ’s fate of being defined by supposed foreign policy failures rather than actual domestic achievements.

Johnson inherited a commitment to defend South Vietnam against communist aggression, but as president he unmistakably made the war his own. Unfortunately, “Johnson’s War” was far from a runaway success. Neither LBJ’s mass bombing of North Vietnam nor his expansion of U.S. ground forces into the hundreds of thousands were enough to bring Hanoi to heel. By the time of his January 1966 State of the Union address, the president was in a veritable political squeeze: how could Johnson continue to appear resolute in the fight against communism while dealing with the agonizing reality that the war in Vietnam might well be unwinnable in a conventional sense?

It was by necessity, then, that the 1966 address was something of a sales pitch for continued involvement in Southeast Asia. Johnson’s argument was twofold: that the country should stay the course in Vietnam until communist aggression had been defeated; and that the United States could afford to wage war in Vietnam while tackling its manifold domestic problems.  The president exhorted the Congress and the American people at large not to balk at the prospect of being active and ambitious on two fronts. The United States was strong enough to enjoy both guns and butter, he argued.

But why did Johnson not simply cut his losses in Vietnam—or at least drastically reduce the U.S. presence there—and focus exclusively on his cherished domestic reforms? The truth is that LBJ certainly would have liked the opportunity to do just this, but he and his advisers were convinced that abandoning Saigon to the communists would be tantamount to political suicide. Only if he could avoid an embarrassing failure in Southeast Asia could Johnson succeed at embedding his liberal designs for the domestic polity; foreign and domestic policy had to be conducted in tandem.

In this sense, Johnson’s experience of governing from the White House is far from unique. On the contrary, history has a habit of denying presidents the luxury of focusing on domestic politics alone. From Woodrow Wilson, who mused on the eve of his inauguration that it would be “the irony of fate if my administration had to deal chiefly with foreign affairs,” to Bill Clinton, who as a candidate for the presidency valued foreign policy only as an extension of economic policy, to George W. Bush—presidents who have come to office determined to focus on domestic priorities rarely have been fortunate enough to carry their ambitions through to completion. International affairs invariably intrude.

For his part, Johnson’s problem was that his presidency took place at a time when the U.S. political system was still intensely colored by the so-called “loss of China,” the conceited phrase then used in America to describe the communists’ victory in the Chinese Civil War. As a freshman senator from Texas during the events of 1949, Johnson had witnessed first-hand the political drubbing that was inflicted upon President Truman in the months and years that followed Mao’s declaration of the People’s Republic. The psychological effect on the future president appears to have been profound; the lesson learnt was never to be seen as weak in the fight against communism.

Today, some inside the United States once again are calling for an expanded and open-ended commitment to defeat a foreign enemy—this time the Islamic State. Proposals abound for the carpet bombing of ISIL territory and the unilateral imposition of no-fly zones, not to mention the deployment of ever more U.S. troops in Iraq and Syria. In stark contrast to LBJ, however, President Obama will have no truck with such domestic hawks. Indeed, the Obama administration has loudly and proudly resisted calls for militarism in foreign affairs as something of a leitmotif.

In other words, Obama has rejected the political strategy followed by LBJ. Whereas Johnson’s goal was to reassure hawks at home that enough was being done in Vietnam in hopes of protecting Great Society legislation (what might be called a strategy of co-optation or even appeasement), Obama has essentially forsaken foreign policy as an issue upon which he seeks to appear “strong.” He has made little effort to compromise with the hawks, and has instead pursued a partisan foreign policy agenda designed to appeal to his core electoral coalition—the Paris environmental accords, the diplomatic agreement with Iran, the opening to Cuba, and so forth.

The political pay-offs of the Obama approach are clear to see. Firstly, money saved by forgoing expansive foreign policies can be diverted towards domestic ends. Moreover, Obama has found it easier to style himself as a domestic reformer because he has repudiated for himself the mantle of ‘war president’ (Obama relentlessly seeks to frame the struggle against ISIL as more of a counter-terrorism operation than an actual war). And because militarism is unpopular with most Democrats, all of this has combined to solidify Obama’s electoral base and draw clear—up until now, favorable—dividing lines between Democrats and Republicans.

But the gap between Obama and his opponents is wide and growing wider. What Obama portrays as strategic restraint, his opponents call weakness; what Obama describes as diplomacy, others luridly deride as the unconscionable abdication of U.S. leadership. So far, events have refused to rule definitively on the question of whose interpretation is “right.” But just as Johnson’s greatest fear was that a catastrophic failure in Vietnam would lead to his and his party’s undoing at home, so too the political risk for Democrats today is that a calamity should befall U.S. interests abroad and thus “prove” Obama’s policies of retrenchment to have been wrongheaded and deleterious.

What might such an event look like? More or larger terrorist attacks on U.S. soil, greater battlefield success for ISIL, the triumph of the Russia-backed Assad regime in Syria, a show of naked aggression from Beijing in the South China Sea, heightened repression in Cuba, evidence that Iran had reneged on its nuclear deal, some unpredictable event on the Korean Peninsula or even an unexpected attack on Israel—any of those could be fatal to Obama’s foreign policy and, by extension to the electoral fortunes of many of his co-partisans, if placed in the hands of a skilful domestic opponent. “Obama let his guard down,” they will say. “The Democrats were asleep at the wheel.”

Lyndon Johnson ruined his legacy by pandering too much to hawkish sentiment—or, perhaps more accurately, by being overly fearful of hawkish condemnation. Tens of thousands of U.S. troops and many more Vietnamese paid the ultimate price. Yet President Obama—a kindred spirit of LBJ in so many ways—has chosen the exact opposite sort of foreign policy: even though Obama, like Johnson, always will do “just enough” to avoid obvious catastrophes from occurring on his watch, he has shown no inclination to steal the clothes of his would-be detractors, as Johnson did.

Once his final year in office has expired, Obama is unlikely to harbor many regrets about his major foreign policy decisions. No amount of U.S. blood and treasure could have squashed Islamic extremism, halted Russian revanchism, democratized Cuba or cowed the Iranian ayatollahs, he will reckon. And he very well might be right in these assessments. But only time will tell whether the Obama approach to foreign policy has been enough to secure his and his party’s domestic standing in the long-term. If current politics is anything to go by, it might just be a close-run thing.