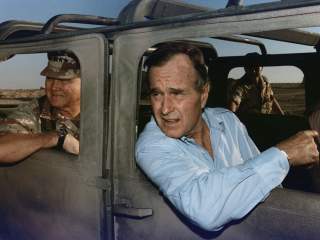 President Barack Obama is known to be a great admirer of President George H. W. Bush, who Obama recently said is "one of the more underrated presidents we have ever had." Obama notes, "When you look at how he managed foreign policy. . . he was thoughtful, restrained and made good decisions." Rahm Emanuel, Obama's former chief of staff, explicitly compared his boss some years back to Bush 41, because of Obama's "realpolitik" and "cold-blooded" instinct about national self-interest. In this view, it is Obama who is the natural heir to the elder Bush, rather than Bush's own son, the allegedly destructive, adventurous George W. Bush.

I consider myself a realist, who has sympathized with Obama on some foreign policy issues like negotiating with Iran and the Asia Pivot. But this comparison is a myth. The elder Bush's team of Brent Scowcroft, James Baker III and Dick Cheney arguably constituted both the wisest and most efficiently run foreign policy apparatus between the Ford administration and now. The differences between Obama and the elder Bush are more important than the similarities.

George H. W. Bush was cautious, yes. More importantly, he emanated strength and conviction, and took hard, risky decisions that completed the work of Ronald Reagan. People forget that German unification and bringing all of Germany inside NATO—rather than leaving the eastern part neutral—was by no means a foregone conclusion. It was hotly debated at the time in both the United States and Europe, with leading newspaper editorialists and even such an august figure as the late George Kennan skeptical about it. Had Michael Dukakis been elected president in 1988, it is highly conceivable that the post-Cold War security map of Europe would have looked different—and worse. But Bush's team would ultimately have nothing to do with compromise on this issue. Indeed, Bush was a pre-globalized, nation-state American who had fought in World War II and saw the end of the Cold War as the real completion of that historic struggle.

Bush's team was ultimately in no mood to compromise over the liberation of Kuwait from Saddam Hussein's Iraqi forces. The elder Bush went to war. Saddam's invasion of Kuwait, like Vladimir Putin's annexation of Crimea and aggression in eastern Ukraine, and China's aggression in the South China Sea, was a classic probing operation—a controlled military action that tested the West for a response. Saddam's action was on a more extreme level than those other examples. Nevertheless, nobody successfully probed against the West under Bush 41. When Saddam tried it, he got whacked. It wasn't an easy choice. The political debate in Washington over whether or not to eject the Iraqi army from Kuwait was intense and lasted for months. Congress was nearly split over the issue. Obama's Secretary of State, then-Senator John Kerry, made an impassioned speech against it. It was a decision that only from hindsight seems obvious. Moreover, on the eve of the 1990 midterm elections, with the debate raging, Bush dramatically increased the strength of U.S. forces, including some reserve call-ups: not exactly a cautious, lowest common denominator move!

Bush was an internationalist who never would have talked about "nation-building at home." Though he exercised restraint—in not liberating Baghdad, in not breaking relations with China after the Tiananmen Square massacre—he was careful in how he telegraphed that message, so as not to create the impression abroad that America could be intimidated. Restraint tends to work well when you don't incessantly advertise it, otherwise it signals apologetic weakness.

The elder Bush administration certainly knew how to conduct negotiations: witness the complex negotiations over the status of post-Cold War Germany, the behind-the-scenes assembling of a vast coalition to liberate Kuwait, and the on-going dialogue with the Soviets that helped prevent major war as their empire in Central and Eastern Europe collapsed. Does anybody really believe that James Baker would have negotiated with Iran exactly as did Kerry? Kerry's public posture emblemized desperation for a deal. Baker never would have made that mistake, and likely would have gotten a measurably better outcome, peeling off some important adversaries to the whole idea of warming to Iran. The Bush Middle East team would also have crafted a better regional strategy to go along with their opening to Iran that would have made allies like Saudi Arabia and Israel less nervous. Saudi and Israeli hostility to the Iran talks was partially driven by the failure of the Obama White House to radiate strength and internationalist conviction generally—not just in the Middle East.

Bush's foreign policy wasn't perfect. The administration's failure to stop the Yugoslav civil war early-on was a conceptual mistake with major humanitarian consequences. But coming soon after the Berlin Wall collapsed, the administration was, initially at least, not being unreasonable in wanting to test whether the Europeans could manage a crisis on their own continent without U.S. intervention.

Regarding Europe, the signature act of the Obama administration may have been its withdrawal of two combat brigades from the continent in 2012—Obama's "mission accomplished" moment, which, coming after the Russian invasion of Greater Georgia in 2008, told Putin he was henceforth free to probe in Ukraine and Syria. More than ships and planes, boots-on-the-ground demonstrate America's willingness to shed blood on behalf of its European allies. To wit, there is a vast difference between rotating troops in and out of Europe and permanently stationing troops there, in terms of a quick response to Russian aggression. That is why America still looks weak, despite the recent plus-up of equipment and troops to Europe. The contrast with H. W. could not be greater. We marvel today at the elder Bush's restraint and pragmatism precisely because it was so deftly combined with the unabashed projection of American power.

There is another reason not to buy wholly into the comparison between Obama and the elder Bush. The Republican Party, in the throes of an identity crisis, requires admirable examples from its past in order to forge a renewed unity and strength for the future—and to define exactly what it is about. And one could well argue that the elder Bush administration represented the last sage and well-executed foreign policy that was at the same time Republican and popular among the American people.

Only by creatively combining the traditions of realism and Wilsonianism can Republicans hope to govern effectively. The two traditions seem at odds but in fact they are not, for interventions in defense of our values can never succeed without a planning process that internalizes all the problems ahead. Tragedy is avoided by thinking tragically. A neo-Reaganite synthesis must build out from both these concepts, and put George H. W. Bush front and center. The elder Bush administration was not the antithesis of Reaganism, but the summation of it.

Robert D. Kaplan is the author of 16 books on foreign affairs, most recently "In Europe's Shadow: Two Cold Wars and a Thirty-Year Journey Through Romania and Beyond." He is a senior fellow at the Center for a New American Security.