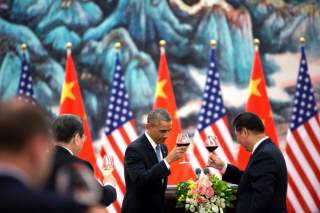 The White House state dinner for Chinese president Xi Jinping on the evening of September 25 was a formal, uneventful affair. No major announcement of future collaboration, no great project between the world’s first and second largest economies, was expected, and none came. Given the calls from some quarters to cancel the dinner, avoiding a bad outcome is something of a diplomatic achievement in itself. Yet, neither that evening nor the two weeks since have done much to shed light on where the United States and China go from here.

Four years ago, uncertainty was much less of an issue. In October and November 2011, President Obama, then Secretary of State Hillary Clinton and then National Security Advisor Tom Donilon, through an orchestrated series of speeches and essays, announced a U.S. pivot to Asia. In Canberra, President Obama stood before the Australian parliament and said, “After a decade in which we fought two wars that cost us dearly, in blood and treasure, the United States is turning our attention to the vast potential of the Asia Pacific region.”

Donilon was the most thoughtful and nuanced in his explanation of the plan. Favoring “rebalancing” over “pivot,” he later described the goals as “economic engagement” and “sustained attention to regional institutions and defense of international rules and norms.” However, these goals became muddled over time, and the pivot became more about whether or not the United States could shift attention from the Middle East to Asia at all, and less about anything it could achieve in Asia with that reoriented attention.

Today, the pivot is essentially played out. New U.S. troops are in Darwin, Australia, and lines of communication between Washington and Beijing are open at meetings such as the continuing U.S.-China Strategic and Economic Dialogues. The Trans-Pacific Partnership (TPP) is moving ahead, to the Obama administration’s great credit. But little more looks likely, and the pivot has failed to turn U.S. attention to the Pacific in a substantial, sustained way. Obama’s “vast potential” of the U.S. in Asia remains largely unrealized, and the Middle East still commands an outsized share of Washington’s focus.

Moreover, U.S. attention in Asia, and U.S.-China relations in particular, may be entering something of a holding pattern for the next two years. Washington will be inward looking in the run-up to its November 2016 election, and Beijing will be focused on both stabilizing its economy and preparing for its 19th party congress in 2017, during which all of the Politburo’s Standing Committee except President Xi and Premier Li Keqiang are expected to be replaced.

The modus operandi for the United States in Asia for the next two years, like at the state dinner in September, may be simply to avoid any bad outcome. This, however, will be no small accomplishment as the sources of a sudden escalation in tensions are more numerous than ever.

– The U.S. Navy is planning to challenge territorial claims made by China around the built-up islands in the South China Sea for the first time since 2012.

– Japan is pushing ahead with its bid for a permanent seat on the U.N. Security Council, which sparked nationalist protests in China as recently as 2005.

– Cyber attacks and espionage emanating from China are more likely as its economy slows, argues Harry Krejsa of the Center for a New American Security in the National Interest.

– In all, a third of respondents in the World Economic Forum’s 2015 Global Risk report named interstate conflict as the biggest threat facing the East Asia/Pacific region—the most for any single threat.

China and the United States have had flare ups in recent years, such as the collision in 2001 between the U.S. reconnaissance plane and a Chinese fighter jet and the 1999 U.S. bombing of the Chinese embassy in Belgrade. Before, however, there were compelling reasons for a then-outward-facing China to deescalate tensions. In 2001, for example, China was in the final stages of joining the World Trade Organization, which was a potential boon to China’s export-driven economy then growing at more than 8 percent per year. As China scholar Jessica Chen Weiss testified before the House subcommittee on Asia and the Pacific this week,

***“Then, China’s leadership under Jiang Zemin was focused on navigating a diplomatic resolution to the standoff and reassuring the Bush administration of China’s benign intentions. Today, China under Xi Jinping may not be able or willing to show similar restraint.”***

What does China want now that could deescalate any unexpected flare up? China joining the TPP seems remote. David Pilling’s column in the Financial Times this week calling for TPP members to start negotiations with Beijing is notable for the pains he has to go to in arguing this idea that sounds, he admits, “outlandish.” Were Beijing to join the TPP, it would go a long way toward solidifying the U.S.-influenced rules and norms across the region that Donilon noted as a goal of the pivot in the first place. Instead, China will most likely pursue its own trade deals, as it recently did with Australia.

In recent years, China’s politics have threatened to take a more nationalist bent, and its longer-term economic health will be determined by the extent to which it relies less on exports and more on domestic demand—neither of which calls for much accommodation with foreign powers. As a manager at a Chinese manufacturing company explained to the Wall Street Journal this week, “By the time TPP is implemented, we will already have transferred the base of our business to our own market.”

Few other options for de-escalation remain. The United States has largely ignored China’s Asian Infrastructure and Investment Bank and was ineffective in persuading other nations to do the same. IMF reforms that would give China a larger seat at that organization—reforms IMF head Christine Lagarde called “indispensable” on September 30—are stalled in the U.S. Congress. And while the run-up to the 2008 Olympics was something of a palliative for international tensions between China and other nations, the next Olympic Games in Beijing are not until 2020.

For the time being, the Asian pivot has become the Asian pause. The political calendar and current economic conditions may mean that 2017, with a new U.S. president and a new Standing Committee consolidated under Xi, is the earliest Washington and Beijing can resume constructive work. Between now and then, however, there are many opportunities for a misstep that not only destabilizes the pivot, such that it is, but also turns the entire region towards conflict.