Obama, Republicans and the AUMF: It’s All about Politics 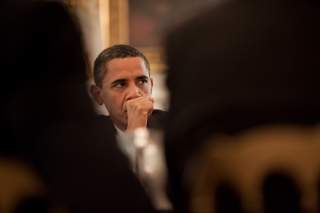 On November 4, Republicans retook the Senate for the first time in eight years. On November 5, President Obama stepped up to the podium for the ceremonial post–midterm election news conference to declare that he heard the American public's message loud and clear: Americans are exacerbated with the Washington gridlock. Obama pledged to work with the incoming Senate Majority Leader, Mitch McConnell, as long as McConnell was willing to work with him as well.

Yet the president made some other news in that press conference. After first punting aside congressional concerns about his power to wage war against the Islamic State terrorist-army in Iraq and Syria, Obama announced that he would, in fact, ask Congress for a fresh authorization for the use of military force (AUMF).

"I'm going to begin engaging Congress over a new Authorization to Use Military Force against ISIL,” the president said. "The world needs to know we are united behind this effort, and the men and women of our military deserve our clear and unified support."

For members of Congress who have been pressing for White House engagement with Congress on a new, ISIL-specific AUMF (Senator Tim Kaine comes to mind), the president's announcement was a vindication of what they have been saying for months now: it is Congress, and only Congress, that has the power to declare war, and it is the people's representatives who are responsible for providing the commander-in-chief the authority he needs to wage armed conflict. For President Obama, however, asking Congress for authorization is not only a clever political move to calm the waters among his Democratic base, but a ploy that will put Republicans on record for supporting the anti-ISIL strategy that the administration has been implementing over the past three months.

The question, naturally, is: what changed? Why, after repeatedly insisting that he had all the authority that he needed under the 2001 and 2002 AUMFs, is President Obama now coming to the conclusion that Congress needs to be a central player in the war debate?

A cynic would argue that it was the embarrassing defeat of Democrats in the midterm elections that finally convinced the Obama administration to reach out to Congress on the war-and-peace question. This is probably too cynical an explanation, however. Although exit polls showed that voters were worried about a major terrorist attack in the U.S. homeland, ISIL and national security didn't rank among the top concerns for the electorate. Unlike the 2006 midterms, this month's contest wasn't about national security. And even if it was, the role of Congress in national security is hardly on the public's radar.

Yet being a cynic myself, I'll put forth another thesis: knowing that Republicans will now be in control of both the House and the Senate for the remaining two years of his presidency, Obama is looking for a win that will show the American people and congressional Republicans that he's truly invested in bipartisanship.

If there is any foreign-policy issue that the White House and the Republican leadership can agree on, it's that launching offensive operations against ISIL positions in Iraq and Syria is an instrumental way to "degrade and ultimately destroy" the terrorist organization that has killed thousands of innocent Muslims (and three American citizens). Speaker John Boehner, Majority Leader-elect Mitch McConnell, John McCain, Lindsey Graham and House Majority Leader Kevin McCarthy are all on record as supporting what the president is trying to achieve. There may be some vocal and reasonable complaints from Republicans about what they label as the administration's self-defeating limitations on the strategy (no U.S. combat boots on the ground, being one), but actually initiating the war is something on which that a vast majority of Democrats and Republicans agree. Kicking the issue to Congress and requesting a fresh AUMF will allow both parties to demonstrate to the American people after a divisive election that bipartisanship can, in fact, prevail on the most important decision that an elected representative can make: whether to send U.S. soldiers, sailors or airmen into a combat situation.

This, of course, doesn't mean that the drafting process will not be tricky. There are a number of tough issues that legislators in both the House and the Senate will need to debate openly. Should there be a sunset clause that would automatically kick in after a certain number of years? Will there be a geographic limit to the authorization that forbids military action on ISIL targets in areas outside of Iraq and Syria? Will U.S. ground troops be permitted, or are they off the table? And what about terrorist organizations outside of the ISIL brand, like Jabhat al-Nusra? Each and every one of these questions must be addressed in an open, transparent and serious way, which could very well increase the amount of time Congress needs to draft an AUMF upon which everyone can agree.

President Obama and his administration will be hoping that their gamble for a quick, bipartisan legislative win will pay off—which is why the slow start of the effort to date is so puzzling.