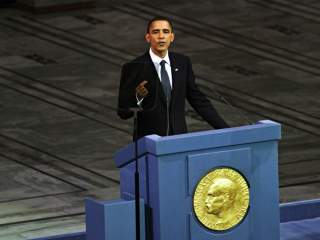 President Obama claims undue credit for progress toward eliminating nuclear dangers. In fact, in nearly eight years, his administrations have taken only a few small steps toward limiting these risks, while launching a nuclear weapons modernization program of unprecedented scope and expense.

The president’s 2009 speech in Prague committing the United States to seeking the peace and security of a world without nuclear weapons excited us all—and garnered him the Nobel Peace Prize. Alas, the president neglected to figure out how this lofty goal was to be achieved. Should the United States continue along the bilateral path with Russia or perhaps it would be more effective to move toward a multilateral negotiation? If the latter, should it be under UN auspices or some new forum? Absent such strategic analysis, the bureaucracy took the default pathway—continued bilateral talks with Russia—which resulted eventually in the New Start agreement. That was a modest achievement, demanding slightly lower caps on American and Russian deployed, long-range weapons, but omitting other classes of nuclear weapons and doing nothing about nuclear arsenals in other nations.

A second opportunity was missed in September 2009, when the president convened the UN Security Council and persuaded the presidents of each member state to attend. The UNSC passed a resolution committing all members to the U.S. goal, “the peace and security of a world without nuclear weapons,” but again, without any tangible follow-up. The resolution could have established a working group to develop a plan to achieve that goal, with specified milestones and reporting deadlines and so forth, but the president again settled for fine words and no concrete actions.

A third and fourth opportunity came with Washington’s own Nuclear Posture Review (NPR) and the follow-on implementation study. In his op-ed, the president says that he reduced the role of nuclear weapons in U.S. national-security strategy. The NPR did that, but it did not reduce those roles nearly as far as many have suggested—to the single purpose of deterring the use of nuclear weapons against the United States and its allies. U.S. nuclear policy still permits first use of nuclear weapons in certain circumstances. Nor did the implementation study call for changes in so-called “requirements” for prompt response, a key factor determining how many weapons must be kept on alert and therefore how many must be in the arsenal. Nor did it reduce the number of warheads kept in reserve. These reductions are all sensible unilateral measures that would have no effect on our ability to deter an enemy attack, but would have reduced the size and cost of the now blossoming modernization program.

A fifth opportunity was missed in 2010, when many members of NATO were calling for the removal of the 180 U.S. nuclear bombs still kept in Europe, ostensibly for delivery by U.S. and allied fighter aircraft. Some of these weapons are stored at Kleine Brogel air field in Belgium, a facility that was repeatedly broken into by protesters in 2008, as was its Dutch counterpart. Other U.S. tactical nukes are located at the Incirlik air base in Turkey, less than seventy miles from the Syrian border, and a base from which the dependents of U.S. airmen and women have just been ordered to evacuate. Instead of supporting calls for nuclear withdrawals, the U.S. delegation sided with NATO nuclear hawks. The statement issued in Lisbon that year as well as the three subsequent NATO summit statements, have reaffirmed the role played by nuclear weapons as part of the alliance’s overall strategy.

To his credit, the Iran nuclear deal concluded last year was a huge accomplishment for the president and his administration, and the Nuclear Security Summits have made progress in reducing stocks of fissile materials around the world, as well as in strengthening the security of those that remain. Against these gains, however, must be weighed the missed opportunities mentioned above and the nuclear modernization program now underway.

Under his watch, President Obama has authorized programs to replace all U.S. strategic submarines and the missiles they carry, to build a new penetrating bomber and a long-range nuclear-armed cruise missile with which it will be armed, and to replace existing Minuteman ICBMs with a new land-based missile—one which in principle could be deployed on some sort of mobile platform. In addition, he is modernizing existing bombs to be used by fighters and long-range bombers, as well as warheads for submarine-launched missiles. And finally, he has authorized rebuilding the nuclear infrastructure—the facilities that produce and maintain the materials and components used in nuclear weapons. If fully implemented, this program will dwarf President Reagan’s nuclear build-up.

No, Mr. President, your nuclear record has not been impressive. Decency demands you return your Nobel Peace Prize.

Barry M. Blechman is co-founder of the Stimson Center.