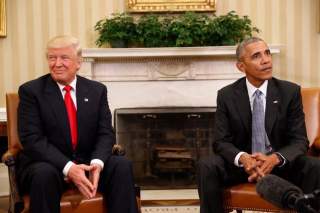 Barack Obama vacated the White House on January 20 with a 59 percent approval rating, one of the highest that a two-term president has had since Bill Clinton’s time. Perhaps this is why he felt compelled to denounce his successor after just a week into his retirement?

If people expected Obama to take a few months off before leveraging his persona and celebrity against President Donald Trump, those beliefs were extinguished today when the forty-fourth president all but encouraged further nationwide protests with the aim of weakening Trump’s executive orders. He would be better off focusing on improving his golf game in Palm Springs, where he is currently vacationing before he returns to Washington, DC. Maybe he can shoot a few rounds of hoops as well. Anything would be better than his comments inserting himself into the brouhaha over Trump’s travel ban. No modern president has been so reckless as to decry their successor right at the outset of their presidency.

Through a spokesman, President Obama stated unequivocally that Trump's restrictions on immigration from seven Muslim-majority countries are contrary to American values and foolish from the standpoint of U.S. national security. “In his final official speech as President,” Obama’s spokesman said, “[Obama] spoke about the important role of citizen and how all Americans have a responsibility to be the guardians of our democracy — not just during an election but every day. Citizens exercising their Constitutional right to assemble, organize and have their voices heard by their elected officials is exactly what we expect to see when American values are at stake.”

Like all Americans, President Obama is certainly entitled to his opinion. Indeed, there are millions of people across the country right now that would agree with what Obama is saying. Even for those who largely support Trump’s immigration restrictions on a temporary basis, it’s hard not to acknowledge that the administration’s implementation of the executive order has been a badly bungled process—key cabinet members, including Defense Secretary James Mattis and Homeland Security Secretary John Kelly, weren’t consulted before President Trump signed the order at the Pentagon. The public relations surrounding this issue has been nothing but negative for the Trump White House over the last few days.

But with that being said, President Obama should be careful. By criticizing Trump so blatantly and openly after just one week on the job, Obama is breaking a largely unwritten but respected rule within the presidential club—a rule stating that presidents should keep critiques to themselves in order to protect the allure and stature of the office. While one can argue that Jimmy Carter and Bill Clinton weren’t exactly deferential to their successors, they at least had the self-control to not blurt out their opposition after just a single week in retirement.

Perhaps President Obama felt he needed to speak up, having all but promised his supporters before transferring power to Donald Trump that he would make his voice heard when bad policies are enacted or American values are infringed upon. Perhaps he now feels free to say what’s on his mind without worrying about the political cost. That, however, doesn’t excuse the optics of Obama’s comments. Indeed, Obama’s remarks look like a popular president who desperately wants to be seen as one of America’s greatest kicking a new president while he’s already down and trying to learn how to run the federal government.

This isn’t the first time Obama has broken precedent. This summer, during the heat of the general election campaign, Obama used his last few trips overseas as opportunities to drill home to a foreign audience how terrible Donald Trump would be to world stability. Paul Saunders has written about it in these pages before.

Just like it was inappropriate for Obama to convert his foreign trips into campaign-related events on behalf of the Democratic presidential nominee, it is more than premature for the forty-fourth president to all but incite further demonstrations against his successor. Obama is only undermining himself, not Trump. He should take a page out of the George W. Bush playbook and stay out of the limelight for a while.