Obama and the Ghost of Lyndon Johnson 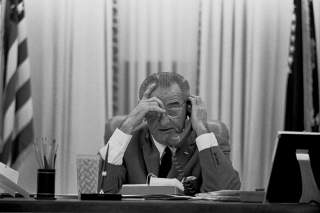 President Obama’s foreign policy is under fire—again. As the security situation in Iraq continues to worsen and the humanitarian crisis there mounts, some critics accuse the president of doing “too little, too late” to staunch the loss of civilian lives, while others chastise him for getting dragged into yet another unwanted (ill-advised, they say) military engagement. Even Hillary Clinton, Obama’s own first-term secretary of state, has lambasted the White House for lacking “organizing principles” when it comes to foreign policy.

The point that Clinton’s charge addresses, that there has been no coherent plan to govern how the administration has deployed U.S. military and diplomatic power over the past six years, has been one of the most vexing aspects of the Obama presidency. Is there an Obama Doctrine? If so, what is it? If not, why not? Is Obama a realist, a liberal internationalist or something altogether different?

In truth, Obama has not made himself beholden to any single set of codified foreign policy principles. There is no Obama Doctrine. But nor is the president purely reactive as others would have it, lurching from crisis to crisis without any sense of what he wants to achieve from his foreign policy. What too many people miss, however, is that foreign policy is not merely an instrument of solving international problems. Rather, it is also deployed with reference to domestic political goals firmly in mind. In this sense, the official language of not doing “stupid stuff” is probably quite an accurate description of the decision-making code that operates within the White House.

It must be remembered that, for Obama, domestic politics comes first. In 2009, Obama faced a major economic crisis and led a party with high expectations of legislative success on the home front. Today, he feels under pressure to deliver a legacy in terms of domestic achievements. The president came into office seeking to end the “dumb war” in Iraq and with a firm view towards concluding America’s mission in Afghanistan (albeit, as it ultimately turned out, under the political cover of a temporary surge in troop numbers). As president, he shunned a leading role over Libya and has done his utmost to avoid large-scale commitments in Syria, Crimea and Iraq.

To understand how Obama’s preoccupation with the domestic arena affects his foreign policy, it is helpful to look back on one of his predecessors in the Oval Office: Lyndon Johnson. As already noted on The National Interest, this month marks the 50th anniversary of the Gulf of Tonkin Resolution, a piece of legislation that was later used by Johnson to assume wide-ranging powers for the waging of war in Vietnam. Yet as Peter Edwards points out, Johnson’s actions in August 1964 were not a political play to politicize American foreign policy, but rather an attempt to minimize Vietnam and neutralize Southeast Asia as an issue ahead of the 1964 general election.

LBJ was not a natural hawk. Although he believed in the need to contain international communism, he much preferred applying this talents to the cause of domestic reform. Vietnam represented a distraction, an unwanted foreign-policy problem that threatened to derail Johnson’s presidency and jeopardize his cherished Great Society.

In the event, of course, LBJ ramped up the U.S. presence in Vietnam between 1965 and 1968. Yet in this, too, Johnson was largely motivated by the same domestic-political reasons that had led him to downplay Vietnam in ’64. As Leslie Gelb argued years ago, Johnson—like U.S. presidents before and after him—always committed just enough American resources to avoid losing South Vietnam, but never agreed to invest enough to win against North Vietnam. The goal—albeit an unsuccessful one—was to deny LBJ’s political opponents the accusation that the president had “lost Vietnam.”

Obama today faces a similar quandary. He wants to focus on domestic politics. Yet he has been dragged into the foreign-policy arena time and time again. Because of his precarious domestic position, Obama cannot afford to sustain a brutal and clear-cut failure in foreign policy. Like LBJ then, Obama will do all he can to avoid his foreign-policy problems becoming disasters for his presidency—even if this means perpetuating them as disasters for other people, now and in the future. In other words, Obama will seek to avoid accusations of negligent inaction or abject incompetence—but he will not do enough to resolve any of the underlying issues. Few will be happy with such an approach. Many will be disappointed.