Obama Wants Allies to Share the Burden. It Won't Happen. 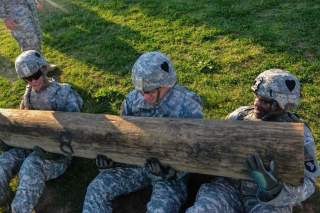 In his West Point speech this week, President Obama vowed to encourage America’s allies to shoulder more of the burden in dealing with international problems and providing for their own defense. Unfortunately, this is far-fetched unless Obama acts to reduce America’s global military commitments.

Obama’s speech will not satisfy the harshest critics of his foreign policy, but, in fairness, no speech was likely to do that. If the critics were expecting him to, for example, recant his opposition to sending U.S. troops into the middle of brutal civil wars, they were sure to be disappointed.

But a dramatic change in U.S. foreign policy dedicated to the use of force to advance U.S. interests was unlikely because there are real constraints on the United States’ ability to use force. And Barack Obama must fashion a policy within those constraints.

The speech revealed the limits of U.S. military power. Indeed, in a line sure to enrage Iraq war proponents, Obama explained, “some of our most costly mistakes came not from our restraint, but from our willingness to rush into military adventures—without thinking through the consequences...or leveling with the American people about the sacrifice required.”

While the speech won’t appeal to those anxious for the U.S. military to become engaged in a range of new conflicts, however, it may be equally disappointing to a public hungry for a different foreign policy that keeps us out of reckless wars.

Even if President Obama were inclined to send the U.S. military on more missions around the world, he knows that the American people are not so inclined. He learned that the hard way after he drew an ill-advised red line before Syria’s Bashar Assad, and then was forced into a humiliating retreat when the public rose up in opposition.

The president intends to avoid a repeat of that particular debacle, as he made clear in his speech, by calling on other countries to step forward. He pledged to “coordinate with our friends and allies in Europe and the Arab world...and make sure that those countries, and not just the United States, are contributing their fair share of support to the Syrian people.”

In a similar vein, he alluded to a shift in counter-terrorism strategy that will “partner with countries where terrorist networks seek a foothold,” rather than one that involves “invading every country that harbors terrorist networks.”

This isn’t new. Obama has embraced burden sharing before, at least rhetorically. On the eve of the intervention in Libya, he declared that true leadership entails creating the conditions under which other countries will step forward and take on responsibilities that have fallen overwhelmingly on the backs of American troops and American taxpayers.

His critics scorned this as “leading from behind,” borrowing an off-hand comment by an anonymous White House staffer. But most Americans see nothing wrong with other countries doing more to defend themselves and their interests.

The problem is that America’s allies are unlikely to pick up the slack unless the United States seriously rethinks its approach to global problems, and reshapes its military accordingly.

In a long-awaited book, MIT professor Barry Posen explains that America’s allies “make their defense decisions in the face of extravagant United States promises to defend them. They will not do more unless the United States credibly commits to doing less.”

To achieve this, we should reduce the number of U.S. troops stationed permanently abroad and actively encourage other countries to take responsibility for their own security. The resulting strategy, which Posen calls restraint, would be less costly to implement and maintain, and would be less likely to entangle the United States in conflicts that do not engage the nation’s core national security interests.

Such a message could have been useful for Barack Obama and his speechwriters, had they been willing to listen. But while the president made a passing reference to “restraint” in his West Point speech, he hasn’t actually embraced Posen’s approach. And that virtually ensures that his hoped-for burden sharing will never materialize.