Obamacare Is Dying. House Republicans Have the Fix. 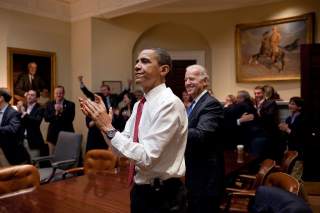 President Obama and his administration use every opportunity to boast about his flagship domestic legislation, the Affordable Care Act (ACA), also known as “Obamacare.” These near-weekly public relations efforts aim to convince the American public that the program has been a success. The administration frequently references the increased number of people with insurance in these efforts, despite the fact that enrollment numbers are not even half of the original projections, and still emanate primarily from the law’s Medicaid expansion. The number of people enrolled into a government program is not the right basis for judging success. Health care systems are intended to treat and heal people, so what fundamentally matters, and what the administration has said little about, is how the people who need health care are being treated. Access to care, medical outcomes, and cost are the metrics that matter, and on these fronts, although Obamacare is just a few years old, the administration has little to brag about.

The administration’s focus on insurance coverage is understandable, because this is essentially the only Obamacare metric that is improving. Yet, as coverage numbers rise, all major insurance companies have been forced to scale down participation in the individual market. As the relatively healthier young adult population fails to sign up for coverage at the rate the administration needs to help balance out costs, United Health Care, Humana, Aetna, and BlueCross BlueShield have had to pull out of many insurance markets due to heavy financial losses. Numbers released for the start of Open Enrollment next week, show an average of three insurers per county in 2017, down from five in 2016. HHS officials confirmed that one in five people living in states using HealthCare.gov will only have a single carrier to choose from next year. This is not what the president promised America.

The much touted ACA Co-Ops are also collapsing. Co-Ops were established as an alternative to traditional insurance companies—a consolation prize for those who wanted a public option. Now, 17 of the 23 established Co-Ops have gone out of business, wreaking havoc on state insurance markets in the process. The startup of these programs was funded with taxpayer sponsored loans that have not yet been paid back.

Premiums on the health exchanges are increasing by double digits across the country. Just this week, the administration admitted that premiums for benchmark plans that determine subsidy levels will increase by an average of 25 percent in 2017. However, many states will see much higher premiums, the second cheapest silver-level plan for a 27-year-old, will increase 116 percent in Arizona and 69 percent in Oklahoma. Seven other states will have premium increases of over forty percent.

Many on the left make light of the premium increase, because 82 percent of Americans with exchange coverage are on subsidized plans, according to the Kaiser Family Foundation. However, the amount of money paid out of pocket does not equal actual cost, because when costs go up, subsidies – and the taxes needed to pay them – go up as well. The government is simply redistributing money and further distorting the insurance market.

Employer sponsored insurance premiums are also increasing. Premiums for family coverage have increased 20 percent since 2011 and 58 percent since 2006 in the employer market. These plans are not subsidized by the government and the costs will be felt immediately by working families. As open enrollment begins on November 1, the administration will continue to push coverage numbers to help distract from the increased costs and lack of insurance choice for many customers.

There should be no celebration until we see improved access to care, better health outcomes and decreasing costs. This won’t happen with the increasing prices and the declining competition resulting from the bigger role government is playing in our health care market under the ACA. We have seen what Obamacare has done for America: as the government’s role in health care has expanded, the market has become distorted, costs have risen, competition has declined, and consumer options have become severely limited. It is time now to let the free market work. Enrolling people into an inefficient system that increases the costs of health care, and raising either taxes or the national debt to cover those costs is immoral and unsustainable. A free market-focused system that encourages competition is the only way to generate more choice and lower prices.

Americans are unhappy with Obamacare, and are increasingly likely to be open to market based reforms. More Americans view the law unfavorably than favorably and health care costs are a top concern for American families. Congress has the opportunity to lead on this issue and demonstrate a better way forward. So far they have focused on repealing the ACA, but no one wants to go back to the pre-ACA status quo. Congress should use this opportunity to communicate that better health outcomes and lower cost—not merely coverage—is what matters.

House Republicans have put forward a plan titled A Better Way. The plan’s objective is simply stated: everyone has access to quality, affordable health care. This plan sets up concrete ways to improve our health care system. Its goal is not to just enroll people into a government program but to also improve care. The plan advocates for choice, portability, innovation, and transparency instead of Obamacare’s overbearing regulations. Unnecessary coverage mandates are replaced with the opportunity for flexible plan design. This will increase competition and decrease price. Insurers will compete by creating plans that offer individuals specific benefits, allowing people to choose the type of coverage they want. Customers will not be forced to buy coverage they don’t need, like many must do currently with the standardized government mandated plan. With more options at competitive prices fewer people will likely elect to go without care. Democrats and Republicans should be able to agree that increased affordability is a worthwhile goal.

The Better Way proposal will also improve access to care. One of the main provisions of the ACA is to expand Medicaid coverage to people below 138% of the Federal Poverty Line. This actually decreases access for many Americans, because Medicaid plans pay doctors and hospitals less than private insurers, who then decline Medicaid patients, limiting access for those enrolled. In addition to an increase in their taxes, this also raises prices for people on private insurance plans, because doctors who do take Medicaid have to charge more to cover their costs. The Better Way Proposal advocates fixing the broken Medicaid system through state driven innovations. Allowing individual states to design plans that best fit their unique populations would mean eligibility and benefits standards that improve care and lower costs. Increased affordability would also mean Medicaid funds could be devoted only to those who truly need them.

Most importantly, the plan improves quality by returning the health care model to decisions between patients and providers, not a federal administrator. Individuals should be trusted to make their own decisions about their health care. Health outcomes will improve when patients have a choice in what doctors they see and what type of insurance they buy. The Better Way plan will also improve outcomes through health care innovation. It advocates for decreased bureaucracy that will spur innovation of new medications and treatments. The proposal builds off of popular reforms already in place: Health Savings Accounts, Medicare Advantage, the Medicare Prescription Drug Benefit and value based payments are popular across the political spectrum. Using this evidence-based practice to improve care, rather than continually tweaking the market with government rules, regulations and executive actions will provide better healthcare to millions of Americans.

The Better Way Proposal is a broad framework for improving health care, and the many pieces of legislation at its foundation provide a step-by-step guide to making them reality.  Straightforward legislation that can be implemented individually is a much better alternative to a large, overly complex mandate like the ACA. The Better Way Proposal includes individual bills that will increase access, lower costs and improve outcomes. If Congress can rally around this new patient centered plan, we may be able to get past only focusing on insurance rates, and instead get to a market based system that provides the greatest quality health care at the lowest possible cost.

Juliana Darrow serves as a health policy fellow at the American Action Forum, a think tank based in Washington, DC.