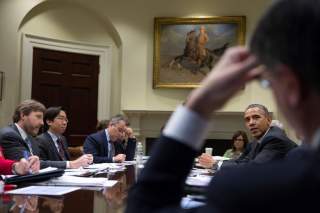 “Is Alicia having sex today?” So asked the man who called Republican headquarters in Cleveland, where I interned in 1998, regularly during the Bill Clinton impeachment saga.

Alicia was the young woman who answered the phones in the afternoon. Our caller wasn’t just a creep—though he undoubtedly was that—but also a partisan Democrat. His point was that if it is legitimate to ask Clinton about his sex life, then local Republicans should be prepared to face similar questions. (I once took the phone from Alicia and had an unprintable argument with this fellow.)

These bizarre exchanges come to mind many summers later, with Congress in recess but members of both parties daydreaming about impeachment. A rump of conservative Republicans wants to impeach President Barack Obama. A nontrivial number of Democrats, perhaps including some in the White House, seem to be saying, “Bring it on!”

For Tea Party groups with relatively few scalps to display from this year’s Republican primaries (where the most successful conservative challenger, Eric Cantor’s nemesis Dave Brat, didn’t have a lot of outside Tea Party support) and Democrats facing a bad election cycle, impeachment is good for business. Both sides can watch the checks from angry donors come flying in.

Support for impeachment among Republican leaders is nonexistent. There is also little enthusiasm for the idea among the most influential conservatives. Rand Paul has said he opposes it, Ted Cruz hasn’t come out in favor of removing Obama from office.

But before dismissing impeachment entirely as an ideologues’ fundraising game, let’s acknowledge that Obama—who has increasingly pushed his executive powers to their constitutional limit and been admonished by the Supreme Court—is toying with a bona fide constitutional crisis on immigration.

The White House keeps telling anyone who cares to listen that the president will expand his deferred action program to cover millions of illegal immigrants already in the United States if Congress does not bend to his will on immigration reform. Pace Obama’s defenders, this is not merely a change in enforcement priorities—such a change is unnecessary, since most of those covered already face only a modest risk of deportation now.

Nobody thought Ronald Reagan could just unilaterally legalize all the immigrants covered by the 1986 amnesty and call it prosecutorial discretion. And Obama cannot simply administrative-fiat implement the same immigration policy Congress has pointedly and repeatedly failed to enact.

In both cases, the president’s preferred policy was killed by a minority in Congress (although both initiatives in question admittedly enjoyed lackluster support at best from the majority parties). Republicans control the House. Even if you think Obama is right about immigration on the merits, this is the wrong way to go about it legally and constitutionally.

That may be one reason the White House appears to be almost baiting the Republicans on impeachment. Not only do they know it is likely to be a political loser for the GOP and a Democratic fundraising opportunity in an otherwise Republican year. It preemptively discredits and takes off the table any recourse congressional Republicans can hope to have over an immigration power grab.

In retrospect, however, I think a partisan impeachment is wrong. Much like a just war must have a reasonable probability of success, the impeachment of a sitting president should only be undertaken if members of both parties are open to the evidence and there is a reasonable chance the Senate will convict.

About a third of the country currently supports impeachment, though that number may reach as high as 57 percent among Republicans. The Senate, controlled by Republicans when Clinton was impeached, has a Democratic majority today. As with the government shutdown, this looks very much like a repeat of the 1990s Republicans should want to avoid.

Democrats would also be wise to cool their jets on impeachment. However likely it is to step on Republican momentum going into the midterms, there is one big difference between then and now.

Clinton’s impeachment focused on misconduct a large majority of Americans believed was a personal matter. In the extremely unlikely event congressional Republicans pursue Obama’s impeachment, the trial will focus on a matter of public policy—and one where a majority of Americans, faced with a crisis on the border, may not agree with the president. This includes voters living in red states with Democratic senators up for reelection in November.

Both sides should be careful what they wish for.