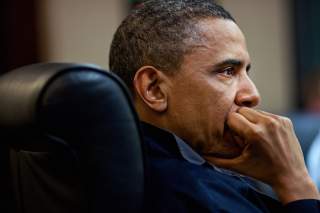 Speaking over seven years ago in Prague, President Obama declared it his goal to bring about “a world without nuclear weapons.”  While this goal was always about as realistic as committing to bring about a world without crime, poverty or war, subsequent events have proven especially unfriendly to Obama’s “Prague Agenda.”

To Obama’s apparent surprise, it has emerged that Vladimir Putin, Kim Jong-un, and a number of other world leaders do not share his enthusiasm for abolishing nuclear weapons. So what’s an idealistic president to do when reality collides with his lofty vision of how the world should be?

In Obama’s case, the answer is clear: double down. During his final months in office, he has decided to try to advance elements of his Prague Agenda by any means possible. One such element is a global ban on nuclear weapons testing.

But again, reality intrudes. A global treaty signed in 1996—the Comprehensive Test Ban Treaty (CTBT)—promised to abolish nuclear weapons testing, but the treaty never entered into force, and has no realistic prospect of doing so.

Among the countries that would have to ratify the treaty in order for it to come into effect are China, North Korea, Iran, Egypt, India, Israel, Pakistan and the United States. If these countries haven’t acted after twenty years, it’s safe to assume they have serious reservations about the treaty and are not on the cusp of approving it.

In America’s case, the CTBT was decisively rejected by the U.S. Senate in 1999. Not only did the treaty fail to achieve the required two-thirds majority, it failed even to achieve a simple majority. Fifty-one senators voted against the treaty, including not only national security hawks, but also by well-known moderates like Sen. Dick Lugar and Sen. John Warner.

There is no evidence that sentiment in the Senate has changed since 1999. For this reason, Obama has made no serious effort during his administration to bring the treaty to a second vote, even during the years when Democrats held the Senate majority.

And so, just as Obama increasingly has resorted to signing Executive Orders when Congress declines to enact his legislative agenda, he has hit upon the idea of asking the UN Security Council to act on the test ban in lieu of the Senate.

Precisely what he will ask the Security Council to do is unclear. His spokesmen insist he will not ask the Council to mandate a CTBT-like ban on nuclear weapons testing. But it’s hard to believe that he’s going to all this trouble just to have the Council send a congratulatory message to the CTBT on the occasion of its twentieth anniversary.

Such a declaration would contradict written assurances by Secretary of State Condoleezza Rice to the Senate in 2008, and would infringe the constitutional prerogative of the Senate to approve the imposition of new international legal obligations on the United States.

Not surprisingly, key senators, led by Senate Foreign Relations Committee Chairman Bob Corker, have strongly objected to Obama’s plan. Obama is unlikely to be swayed by such objections, however, and so the Senate finds itself in the embarrassing position of having to rely on such veto-wielding members of the UN Security Council as Russia and China to ensure that the strictures of the U.S. Constitution are respected.

Proponents of the CTBT are fond of claiming that the treaty has established “an international norm” against nuclear weapons testing since it was signed in 1996. If there is a norm, however, the exceptions swallow the rule. The known exceptions include nuclear weapons tests by India (1998), Pakistan (1998) and North Korea (2006, 2009, 2013 and 2016.)

Then there is the even more troubling matter of the unknown exceptions. This problem stems from two of the treaty’s fatal flaws. First, there’s the awkward fact that the CTBT does not define what it purports to prohibit. The treaty leaves it to the parties to define for themselves what nuclear weapons tests are prohibited.

The United States has adopted a strict interpretation, considering any test that produces a nuclear yield to be prohibited by the treaty. But Russia, and possibly also China, have adopted more relaxed interpretations that permit tests with hundreds of tons of nuclear yield.

Are these countries taking advantage of the flexibility they read into the treaty to actually conduct low-level nuclear tests? The truth is we don’t know, because of a second fatal flaw in the treaty: compliance or noncompliance with its prohibitions is not verifiable by existing technological means. The National Academy of Sciences concluded in 2002 that it is possible to conceal from detection underground nuclear tests with yields up to 1,000-2,000 tons.

And so, if the CTBT were to enter into force in its current form, we would confront a situation where other parties could claim a right to conduct low-level nuclear tests, the United States would neither claim nor exercise such a right, and we would have no way of knowing the degree to which other parties were engaging in low-level tests that we consider prohibited.

Proponents of the treaty assert that none of this matters, because low-level tests are of limited value to a country wishing to develop nuclear weapons. But this misses the point that such testing is of considerable value to countries seeking to develop or improve smaller, tactical nuclear weapons for use on the battlefield. Both Russian and Chinese nuclear planning emphasizes the potential use of tactical nuclear weapons, and therefore it would put U.S. national security at risk to enter a treaty under which our adversaries were engaging in such testing and we were not.

This function of the U.S. nuclear arsenal did not end with the Cold War. For example, following North Korea’s nuclear weapons tests over the past decade, public support in South Korea for producing nuclear weapons has been growing. According to a poll taken earlier this year, over two-thirds of South Koreans now favor the deployment of a South Korean bomb. If America wants to discourage South Korea from pursuing this increasingly popular option, we need to reassure Koreans of the reliability of our nuclear umbrella. Clearly we cannot afford for Koreans—or other American allies—to question whether our weapons will work in a crisis.

If one believes, as Obama suggested in Prague, that there is a good chance nuclear weapons can be banished from the face of the earth during his lifetime, then perhaps it is possible to discount potential future concerns about the reliability of America’s nuclear weapons. But if nuclear weapons are going to be around for considerably longer than that—and not even Obama excludes that possibility—then it would be foolhardy to deny ourselves the option of nuclear weapons testing should the need arise.

After all, nuclear weapons are a man-made device, and no man-made device lasts forever. No one would park a car in a garage and have 100 percent confidence that it would start fifty or one hundred years later, no matter how carefully it was maintained in the interim.

Twenty-four years have now passed since the last test of an American nuclear weapon. The day will come when both allies and adversaries begin to question whether America’s nuclear weapons have become like a car that hasn’t been started in one hundred years. When that day comes, we will face a more dangerous world, not a safer one.

The Senate wisely chose in 1999 not to foreclose the possibility of testing America’s nuclear weapons if necessary to maintain confidence in their reliability. It is not only constitutionally dubious, but also dangerous, for Obama to ask the UN Security Council to supersede that judgment.

Stephen Rademaker, a Principal at the Podesta Group, served as an Assistant Secretary of State responsible for arms control and nonproliferation from 2002 to 2006.