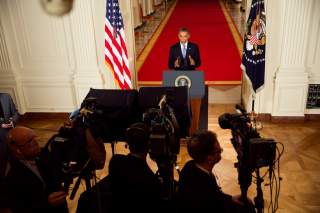 The president cloaked his executive amnesty in conservative rhetoric about family values, uncaring bureaucrats, buttressing a system that rewards people who work hard and play by the rules.

But Obama’s interpretation of his legal authority was breathtakingly radical. He has essentially decreed that the path to legalization envisioned in bills Congress has rejected repeatedly will be in effect for 4 to 5 million illegal immigrants, without congressional approval.

The president calls it prosecutorial discretion, or simply, prioritizing enforcement. “Felons, not families,” became the talking point. He said this kind of change is routine. In the week before Obama spoke, a slew of articles appeared in liberal publications arguing that Ronald Reagan and George H.W. Bush did much the same thing.

They did not. Congress passed an amnesty in 1986. (It, by the way, legalized fewer people than Obama’s executive action.) Reagan and Bush tied up some loose ends created by the law. The scope was much smaller.

When Congress codified and expanded Bush’s measure in 1990, only 140,000 people took advantage of it. That legislation also sought to preempt and limit further presidential amnesties, so it is odd to cite it as precedent for what Obama is doing here.

And if we’re going to cite the amnesty Reagan signed into law (as opposed to merely decreed), we should at least recognize it was a complete failure at curtailing further illegal immigration.

But Obama has faced intense pressure from groups who appear to believe immigration restrictions of any kind are illegitimate in principle—at least when impacting their co-ethnics—and demand not one more deportation.

Really? Not even the violent criminals the president himself has said should be an enforcement priority?

For years, leaked documents have emerged showing members of the Obama administration contemplating administrative workarounds to Congress’ failure to pass their desired immigration reforms. Each time, they were dismissed as working documents and brainstorming sessions.

“DHS will not grant deferred action or humanitarian parole to the nation's illegal immigrant population,” a Department of Homeland Security spokesman told me in response to one such leak in 2010.

That memo suggested executive amnesty could “be messaged as a security measure to bring illegal immigrants out of the shadows.” It would be a way to break “through the Washington gridlock in an effort to solve tough problems.”

It’s true that many of the 4 to 5 million beneficiaries of administrative action wouldn’t have been deported anyway. And this isn’t a permanent legal status. It could be overturned, albeit with great difficulty, by a future administration.

But setting conditions under which they can get Social Security numbers and work permits—conditions that look strikingly similar to those appearing in legislation Congress has pointedly refused to enact—this goes beyond prosecutorial discretion to policy making.

This is bad policy, whether imposed by the president or passed by Congress. The fatal flaw of comprehensive immigration reform is that if the fines, back taxes and other requirements that are supposed to differentiate it from amnesty have any real teeth, large numbers of illegal immigrants will be deterred from applying and those who do apply will find themselves mired in bureaucracy.

If the reform really will end up bringing many millions “out of the shadows,” the government will have to be lax in enforcing the conditions for legalization, perhaps to the point of making them window dressing. In the process, a large portion of immigration to the United States will continue to occur at the sole discretion of the immigrants, no matter how poor or mismatched with U.S. labor markets.

The biggest issue Obama’s immigration gambit raises, however, is whether it is really appropriate for a president to dictate to Congress what legislation it will pass. It is one thing for the president to propose legislation and rally public support. It is quite another to treat the legislature as an inferior branch of government.

Obama is in effect saying that Congress must pass the specific bills he wants or he will push his constitutional powers to their limits—or perhaps beyond them. This is dangerous territory.

It’s quite possible that this process question will be less important to the American people than the substantive policy itself. In that case, Obama may be surprised to learn that not everyone agrees with him about immigration.