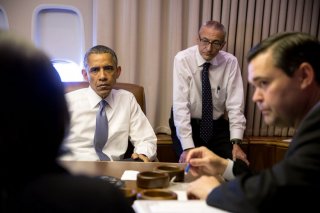 With over 120 people massacred and scores injured in central Paris this past Friday, President Obama’s remarks that ISIL had been “contained” in Syria and Iraq underscore both a failure in intelligence and strategy.

Since the seizure of Mosul over a year and half ago, President Obama’s team has consistently underestimated the potency and resilience of ISIL as a national security threat to the United States. Obama previously referred to the nascent organization as a JV team and a day before Paris remarked that ISIL had been downsized and contained.

Even before the rise of ISIL, the White House has misjudged the potential risks of Syria’s civil war on the security of the U.S. homeland and its allies abroad. Obama once innocently compared Syria to the Congo, but as the events of Friday suggest, the President is facing a challenge he didn’t anticipate despite clear warnings to the contrary. The U.S. military strategy in fighting ISIL is both cumbersome and failing to reap significant progress. The anti-ISIL air campaign has consistently favored restraint and narrowly defined targets at the expense of making an effective and credible push to debilitate ISIL’s supply lines and their ability to hold key strategic centers, notably Raqqa and Mosul. While minimizing civilian casualties in a necessary priority, this objective shouldn’t be at the expense of allowing ISIL to manage and run a state from which they have launched both a reign of terror in Syria and Iraq and abroad.

At the same time, the ground strategy has been equally a fitful low-resourced effort of failing to train adequately opposition militants, tribal outreach, reliance on the PYD, and Iran’s IRGC and Shi’a militias. While Washington has stepped up its arming and support of this anti-ISIL coalition on the ground, the U.S. has tended to over-estimate the effectiveness of these forces.

While no country can ever prevent all terrorist attacks and Washington and its partners have foiled multiple planned attacks, Paris, Ankara, Beirut, and the Sinai are clear signs that the U.S., Russia, Turkey and Europe cannot prevent every attack and the intelligence capabilities of these states need to be improved to more adequately and robustly address the challenge ISIL poses.

Underlying these strategic and tactical failings are the fundamental underpinnings of President Obama’s flawed approach to ISIL. ISIL cannot be simply contained. The mindset that Washington can remain safe and secure and focus on Asia without having a sustained strategy for combatting global extremism and addressing instability in the Middle East may sound appealing for a President seeking a legacy of ending wars in the Middle East, but it isn’t a strategy for securing America’s future. Quite the contrary.

It would be a mistake to not use this moment as an opportunity to lead a global coalition to effectively fight ISIL. Focused more on engaging opponents in the region, Washington needs to reinvest in its partners in the region and also improve relations with other states facing common challenges. President Obama needs to commit adequate resources to defeat ISIL and support his European partners more robustly. Obama should use the tragic events in Paris as an opportunity to reexamine his fundamental assumptions about America’s interests and its security globally.

Andrew J. Bowen, Ph.D. is a Senior Fellow and the Director of Middle East Studies at the Center for the National Interest. You can follow him on Twitter: @abowen17.