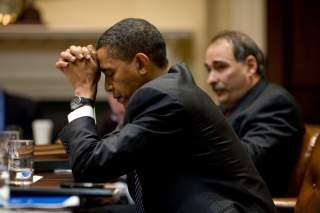 Just a few days after Obama, who assured us there would be no U.S. boots on the ground, announced a doubling of U.S. troops—excuse me, “advisors”—in Iraq and barely two months after the Obama administration first unveiled its strategy to “degrade and destroy” ISIS, we are told the administration is rethinking its strategy. What’s going on?

I will resist the temptation to cite Casey Stengel’s question about the 1962 NY Mets: “Can’t anybody here play this game?” But regardless, the administration and its sixty-nation coalition does not, to put it mildly, inspire confidence. It’s hard to escape the conclusion that Obama’s Middle East policy increasingly resembles a Marx Brothers movie.

The strategy, as announced, had a coherent logic to it. But it required some large leaps of faith. As Chairman of the Joint Chiefs of Staff Gen. Martin Dempsey told the House Armed Services Committee last week, “One of our assumptions is that the government of Iraq will be inclusive. One of the assumptions is that the Iraqi security forces will be will to take back al-Anbar province…If those assumptions are rendered invalid, I will have to adjust my recommendations.”

The strategy assumed that once Maliki was removed as Iraqi prime minister, a new leader would form a more inclusive government, one that Sunnis would not reject. Bombing would buy time until Iraqis could be trained to fight ISIS—boots on the ground that would complement our air war.

But so far, Iraq’s new prime minister, Haider al-Abadi, has done little to change Sunnis’ perceptions of Baghdad. Appointing the head of the Badr Shia militia to the powerful post of minister of the interior hasn’t helped. Will Baghdad fully allow the fostering of Sunni national guard forces? A recent shake-up in Iraq’s defense ministry and senior military leadership may be a step in that direction. But it will be at least six to eight months before it is possible to judge whether Sunnis have any confidence in the new government.

The United States has doubled the number of advisors to 3,000. But we already spent some $20 billion training an Iraqi military (2005-11) that disappeared at the first sign of ISIS advances. How much of the problem is training? In fact, it is the Kurds doing the lion’s share of the fighting. Yet Obama hesitates to meet their request for military aid for fear of offending the Iraqi regime.

In fact, the only real “boots on the ground” fighting ISIS so far are an Iran-influenced Iraqi Shia militia, the Kurds and Iran’s Quds force. Only the Kurds could be said to be directly aligned with the U.S.-led coalition. Gen. Dempsey told the House committee last week it would take “about 80,000” to regain the territory lost to ISIS. No wonder Dempsey also said he’s “open” to the idea of inserting more U.S. troops.

One has to wonder why Turkey and the Arab regimes on the frontlines have been reluctant to put any of their respective boots on the ground. Aren’t they the ones most directly threatened by ISIS and its ambitions to replace nation-states in the region with an Islamic caliphate? President Erdogan in Turkey appears far more concerned about keeping his Kurdish minority in check than about stopping ISIS. Ankara, a NATO ally, has refused to even allow U.S. forces to use military bases there in the air war against ISIS. How hard Erdogan is cracking down on the flow of ISIS fighters via Turkey is also in question.

The Syria part of Obama’s strategy required downright magical thinking. The notion that the same “moderates” who we have been ambivalent about arming for the past three years can suddenly be trained and will counter ISIS was largely wishful thinking, at best. Months later, the vetting of the “moderates” has barely begun to take place.

Turkey and the Arab Gulf states are looking for a strategy to oust Bashar al-Assad. Perhaps at least a no-fly zone to protect refugees. But what are they prepared to bring to the table?

Here’s a heretical thought: Given that it is the Assad regime dealing with ISIS on the battlefield, is there not a case for deferring the confrontation with Assad, until after we neutralize the Greater Evil? Is Assad worse than Stalin, our WW2 ally?

Regardless of how you answer the question, clearly the Obama administration’s tactics and resource allocation are seriously out of sync with its professed strategy.

Bomb Them Into the 21st Century?

Beyond that, it might be useful to step back and put the entire backlash to the Arab Awakening in historical context. How did we go from the buoyancy of the Arab Spring to ISIS and Boko Haram barbarism so quickly? The Arab Islamic world is engulfed in what appears likely to be a lengthy identity and cultural civilizational crisis some have dubbed a contemporary version of the 17th century Thirty Years’ War. Much of the Middle East has yet to come to terms with modernity, let alone the 21st century.

Some argue it is in part a predictable unraveling of the Sykes-Picot accord, which after WW1, divided the Ottoman Empire into artificial (and tribe/clan/sect as well) nation-states in a region that was unfamiliar with such political entities.

In any case, understanding that core reality ought to shape U.S. policy thinking. We have in many parts of the Moslem world, an entire generation so depraved that suicide bombings, beheadings and nihilistic violence have become a norm for some. The jihadists are good at blaming all problems on external forces and at blowing things up, but not so much at living. This problem is decidedly not intrinsic to Islam. There are numerous examples of successful, modern Islamic societies—Indonesia, Malaysia and Turkey come to mind. Even in the Mid-East places like Dubai and perhaps Tunisia, there are also candidates. Yet this malaise is part of the political environment in the Middle East and parts of South Asia.

This is our third Iraq war since 1991, with additional incursions into Libya, and occasional counterterrorist forays into Africa. Have we gotten much smarter about it since 9/11? That is clearly debatable.

The other legitimacy issue is how to counter Islamist propaganda, projected with increasing skill via social media on the internet, that it is all about America’s purported antipathy toward Moslems. Absurd or not, it has been a useful recruiting tool, more so with every civilian casualty and beheading. This, of course, despite the harsh reality that ISIS has killed and abused more Moslems than all U.S. bombs have harmed thus far; yet we fail to get that across in the Arab world.

It is always a foreign-policy challenge to know when to hold'em and when to fold’em. Clearly, the savage, nihilistic barbarism of ISIS is intolerable. Apart from a deficit of coherent U.S. policies, the other issue is whether the commitment deficit of U.S. partners in the region can be overcome.

Robert Manning is a senior fellow of the Brent Scowcroft Center for International Security at the Atlantic Council and its Strategic Foresight Initiative. He served as a senior counselor to the UnderSecretary of State for Global Affairs from 2001 to 2004, on the US Department of State Policy Planning Staff from 2004 to 2008, and on the National Intelligence Council (NIC) Strategic Futures Group, 2008-2012.