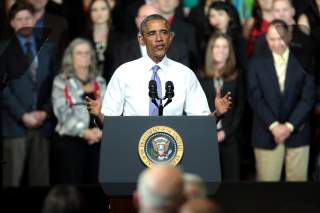 From the moment Barack Obama assumed the presidency, many conservatives detected on him a whiff of the exotic and the radical. Newt Gingrich accused him of exhibiting “Kenyan, anticolonial behavior,” while author Dinesh D’Souza claimed that the new president was obsessed with his African father and consequently that “the U.S. is being ruled according to the dreams of a Luo tribesman of the 1950s.” Obama’s effusion in favor of “fundamentally transforming the United States of America” was interpreted as an act of subversion, to be engineered by someone who didn’t quite care for our country because he wasn’t quite of our country.

The right got much correct during the Obama years, but on this point it’s more that leering partisans were wrong. Not only were the conspiracy theories about the president utter nonsense, Obama turned out to be one lousy Kalashnikov-toting Marxist guerilla. He was instead a conventional and even predictable progressive, firmly lodged in the American tradition of the Roosevelts and Lyndon Johnson, whose signature policy accomplishments—Obamacare, financial regulation, the stimulus the Iran nuclear deal—had been Democratic priorities for years if not decades. Obama’s innovation was his attempt to, as Jonathan Chait has put it, “make technocracy lyrical,” to glamorize with his coruscating oratory the arcane processes of government crucial to liberal achievement.

Tuesday evening’s farewell speech was Obama’s final chance at lyricism, held in his hometown of Chicago where he gave his first presidential victory speech more than eight years ago. He delivered. More than any since Ronald Reagan, our current president has the ability to summon a little civic pride to your throat, even as you glide over the obvious hypocrisies like his invoking our “freedom of religion” years after he tried to ramrod the Little Sisters of the Poor into providing contraception coverage. There’s a reason BuzzFeed journalists were reportedly sobbing last night and it wasn’t just their own biases.

This was a campaign speech, not only because every Obama speech is a campaign speech, but because the campaign trail is integral to his understanding of progress. For Obama, America is a nation constantly in flux, needing to be siphoned into forward movement rather than regression. Those forces preceded him and will continue long after he’s gone, which is why Tuesday’s address was as much a challenge as it was a victory lap, with litanies of the same national problems that he inherited almost a decade ago. His most remarkable admission was this one: “Race remains a potent and often divisive force in our society,” a rebuke to those who tittered back in 2008 about our first post-racial president. Implicit throughout was an admission that messiah lightworker Obama was a fraud, that it was always unrealistic to expect a president to enact anything but the most incremental change.

Inevitably, though, the address was going to be haunted by Obama’s successor, and it was. Many of his lines, some of which were boilerplate borrowed from umpteen other speeches, seemed suddenly like pointed jabs against Donald Trump. “For every step forward, it often feels we take one step back.” “That’s why I reject discrimination against Muslim Americans.” American democracy was said to be “tested” and under “threat,” by jihadists and foreign strongmen, sure, but also presumably by the figure casting his combed-over shadow across the stage. How did the presidency of Barack Obama culminate in America electing the antithesis of everything he imagines himself to be? If matters really are improving, why has the Democratic Party lost 1,042 state and federal seats since 2008? These weren’t potholes on the path of progress; they were lurching course corrections, and Obama’s usual gloss wasn’t enough to conceal them.

You can make technocracy as lyrical as you like (and we’ll probably never have as talented a bard as Obama) but making it work is something altogether different. Obama came to the presidency pledging to tackle economic inequality; the predictable effect of his government interventions has been to widen it between those who can afford his new regulations and those who can’t, those who have stable health insurance and those who are tossed into the high-deductible wilderness of Obamacare, those ingratiated with his political class in Washington and those who can’t afford a flat in Shaw let alone a lobbyist. The Obama years have been lucrative for the stock market as well as the wealthy and upper-middle class, but belying all that is an economy that’s grown at the fourth-most sluggish rate of any presidency and the record 95 million Americans who are out of the workforce.

None of this is to adopt the soapbox-stomping demagoguery of Elizabeth Warren. It’s simply to acknowledge a reality, one that exerted itself on November 8 when tens of millions left behind by Obama’s technocratic renaissance and decided to force-feed Washington a cupful of castor oil. Obama wanted to be Josiah Bartlet or perhaps Leslie Knope in the later seasons of Parks and Recreation, defending his government of chirpy and geeky idealists. He succeeded, but merely at the lyrical. The more substantive goal of leading the country out of the Bush-era doldrums eluded him, and it showed on Tuesday. From Obama’s perspective, it’s been more like two steps forward, three steps back.