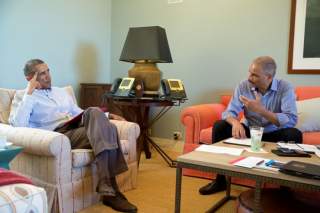 Perhaps the biggest problem with the reaction of President Obama and his attorney general, Eric Holder, to the grand jury verdict in Ferguson is their non-support for the difficult work of the grand jury. That and their support for the mistaken proposition that the administration of justice is unfair, biased, and prejudiced towards “communities of color” undermine our criminal justice system.

On November 25, Obama said that the “grand jury made a decision yesterday that upset a lot of people.” He had no words of praise for members of the grand jury, both black and white, for engaging in their civic duty in the face of mob violence, threats, and media scapegoating -- a media that was pushing an incorrect story about what happened without reviewing the extensive evidence in the case.

This would have been the perfect time for the president to reinforce our faith in the legal system, a system that is one of the best and fairest in the world. He could have pointed out that, while a tragedy occurred here in that a young man lost his life, the judgment of these jurors should be respected, not just “accepted.”

As Quin Hillyer has pointed out, the president also should have told the American people that “this jury’s exhaustive weighing of the evidence was admirable.”  He could have acknowledged as well “the copious evidence that utterly disproved some of the earliest accounts of the shooting and had proved that there was“ a physical confrontation within the police car itself between Officer Darren Wilson and Michael Brown shortly after Brown robbed a convenience store. Obama should have recognized the anger on the street in Ferguson was being fueled by false stories that had no real basis in fact.

But the president did none of that. Instead, he added more fuel to the fire of the false claim that racial bias was at the root of what happened, and that this problem is a pervasive one. According to Obama, the frustrations about what happened in Ferguson “have deep roots in many communities of color who have a sense that our laws are not always being enforced uniformly or fairly. That may not be true everywhere…but that’s an impression that folks have and it’s not just made up. It’s rooted in realities that have existed in this country for a long time.” [Emphasis added.]

But that frustration is not rooted in reality. It is rooted in something that apparently neither the president nor his civil rights advisors such as Al Sharpton want to acknowledge: the unfortunate and tragic fact that the main reason so many more black Americans, particularly young black males, are caught up in the criminal justice system is because they commit far more crimes, particularly violent crimes, than anyone else.

President Obama had a grand opportunity to talk about the fairness of our criminal justice system, which despite its faults, is an equitable system that ensures the due process rights of those accused of breaking the law. It was an ideal time to discuss the deeper cultural, behavioral problems that exist in the black community.

Attorney General Eric Holder engaged in the same undermining of the grand jury. In a statement on November 24, Holder’s only reference to the grand jury proceeding was that it had “concluded.” In fact, he distanced himself from the grand jury’s conclusion, making it clear that DOJ’s “independent” investigation “remains ongoing” and that “even at this mature stage of the investigation, we have avoided prejudging any of the evidence.”

But the “mature” evidence released by the grand jury makes it clear that there was no civil rights violation of any kind and that this confrontation between a local police officer and a criminal suspect had nothing to do with race.

There is no doubt that, as Holder said, Brown’s “death was a tragedy.” But it was one that flowed from Brown’s decision to strong arm a store clerk during a robbery and to then confront a police officer. Brown is being painted as a martyr for the civil rights movement, a sad comedown from the legacy of real civil rights heroes such as Martin Luther King, Jr. and real martyrs such as civil rights activists James Earl Chaney, Andrew Goodman, and Michael Schwerner, who were cruelly murdered by the KKK in Mississippi in 1964.

As a result of meetings that the president had this week with his cabinet and law enforcement officials over what happened in Ferguson, he (and Eric Holder) announced a series of steps that his administration will take. Some of them, such as reviewing the transfer of surplus military equipment to local law enforcement, are positive developments. But the continued implication that law enforcement officers nationwide cannot be trusted by all Americans and that many are treated unfairly because of their race damages our justice system.

Eric Holder’s announcement that DOJ will soon release guidelines banning racial profiling again gives the false impression that what happened in Ferguson was the result of racial profiling. In any event, the Bush administration already banned racial and ethnic profiling in 2003 when the Civil Rights Division issued such guidance for all federal law enforcement officials. It said that “racial profiling is wrong and will not be tolerated.”

We should be more concerned about the violence, looting and arson in Ferguson, as well as the false narrative being pushed across the country that black Americans are routinely treated unfairly in the criminal justice system. The undermining of our faith in the criminal justice system by the president, the attorney general, and many others has long-term, negative consequences that will only deepen the racial divide.

Hans A. von Spakovsky is a Senior Legal Fellow at The Heritage Foundation and former Justice Department lawyer. Along with John Fund, he is the coauthor of  “Obama’s Enforcer: Eric Holder’s Justice Department” (HarperCollins/Broadside 2014).