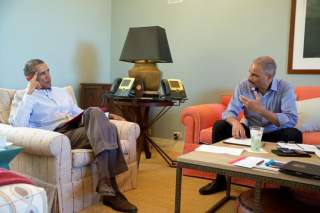 One must ask what President Obama was seeking to accomplish by weighing in, early on, on the matter of the sad death of young Michael Brown at the hands of a police officer in Ferguson, Missouri. Here we have that combustible combination of law enforcement, criminal justice, racial tension, personal tragedy, street demonstrations with attendant looting and national attention. Predictably, the Reverends Al Sharpton and Jesse Jackson would be on hand to foment racial anger among Ferguson’s African American residents, as they always do in such circumstances, long before anyone really knows what actually happened. For those charged with bringing the community of Ferguson through such a thicket, it was going to be difficult enough without any further complications.

And yet it is in just such circumstances that President Obama seems most intent on adding further complications. That’s what he did the other day in adding his voice to those grappling with this incendiary development. To understand just how sadly meddlesome the president was, consider his actual words in their entirety:

The local authorities, including the police, have a responsibility to be open and transparent about how they are investigating that death and how they are protecting people in their communities.

On one level this is merely a truism, a simple statement of the responsibility of local officials. Hence, on that level, it is gratuitous. But, coming from the president of the United States in a matter of such delicacy—and before the officials with direct responsibility have had a chance to investigate the matter effectively—it carries serious weight beyond the truism. It implies that the president, with his greater moral authority, needs to weigh in because of implied or presumed limitations on the part of those with the actual responsibility for dealing with this complex and potentially dangerous situation. He goes on:

There is never an excuse for violence against the police or for those who would use this tragedy as cover for vandalism or looting.

Another truism, again gratuitous. Of course, there is no excuse for such actions, and so it would seem to go without saying—unless there is another, related point the president wishes to make. And sure enough:

There also is no excuse for the police to use excessive force against peaceful protests or to throw protesters in jail for lawfully exercising their First Amendment rights.

Another truism, but fraught with implications. Here we have a president, thousands of miles away from this tragedy as he pursues his Martha’s Vineyard vacation, setting himself up as the arbiter of just where the proper balance should be struck in the fast-moving and perilous standoff between thousands of protesters, with significant looting and rock-throwing going on, and the authorities charged with ensuring that this highly charged situation doesn’t flip out of control and lead to serious violence and bloodshed. In directing his admonitory words at both protesters and local government officials, he implies a moral equivalence of the two sides, which serves to undermine the standing of the local officials. It also suggests that there may in fact have been excessive force used or that officials violated protesters’ constitutional rights.

Obama’s tendencies in such situations may be understandable. As the nation’s first black president, he quite naturally may see himself as having particular standing to address racial issues within the nation, perhaps especially when they become raw and anguished. But his track record on such matters has not been impressive.

He weighed in unwisely when Harvard Professor Henry Louis Gates was arrested in 2009 after he became belligerent when police mistakenly concluded his effort to enter his home without a key might represent a burglary. Without seeking to understand all the facts involved, the president declared that the local police had been “stupid.” This maligned an officer who had an exemplary record on race relations and who was seeking to handle a puzzling situation as best he could. The president quickly backtracked, talked about the incident as a “teachable moment” and invited the two men to the White House for a conciliatory discussion over beer.

Worse, he seemed to jump to conclusions regarding the tragic death of Trayvon Martin in Sanford, Florida, in 2012. “If I had a son,” said the president, “he would look like Trayvon.” This represented a blatant presidential intervention—again, long before the facts were known—into a delicate criminal justice case in which Martin’s killer, George Zimmerman, deserved the full protections of American jurisprudence. In the end, Zimmerman was acquitted, with a jury of his peers concluding that prosecutors had failed to prove, beyond a reasonable doubt, that the accused’s actions were not self-defense.

What can we say about such presidential activity? Simply, that it is unwise, meddlesome and potentially disruptive. Not every racial incident or episode of national notice needs a presidential intervention, and many could be better handled without such interventions.

As for Ferguson, the complexity and difficulty of the situation is reflected in developments of the past few days. After initial clashes between protesters and Ferguson police, and after Obama’s observations issued from Martha’s Vineyard, Missouri governor Jay Nixon ordered local police officials to relinquish command of the situation to the state highway patrol. The state patrol promptly adopted a less confrontational approach, removing riot gear and mingling with protesters. It seemed to work for a time.

Then looting and street destruction resumed, and the governor imposed a curfew on Ferguson. Sunday morning seven persons were arrested in conjunction with officials’ efforts to enforce the curfew, and two shootings were reported. Sunday evening going into Monday morning violence seemed to continue. Governor Nixon early Monday morning ordered the National Guard in to help restore order. There is also the potential for even larger challenges ahead following the release of a “preliminary private autopsy” report concluding Brown was shot at least six times, twice in the head.

It remains an extremely delicate and ominous situation, fraught with potential to slip out of control at any moment. The man most directly responsible for getting this community through this harrowing time of unrest is Governor Nixon. So far, he seems to be handling it with due sensitivity mixed with appropriate firmness. The last thing he needs is second-guessing from on high.