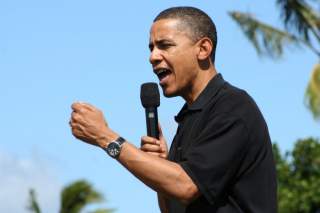 Around this time last year, President Obama addressed the U.S. public to outline his administration’s policy towards the Islamic State.  It was a speech that Obama was no doubt reluctant to make given his general preference that foreign-policy issues be kept off the domestic agenda. But ISIL’s dramatic territorial gains in Iraq and Syria meant that some sort of response was inevitable.  Twelve months on, how is the president’s strategy holding up?

In his speech, Obama stressed that ISIL should be understood as a terrorist organization that could be dealt with using more-or-less conventional counter-terrorism tools. The U.S. need not put boots on the ground to defeat ISIL, he reassured Americans.  Instead, the same techniques already being used against al-Qaeda and other terrorist networks would continue to suffice: airstrikes, financial sanctions, and the arming of allies in the region (in this case, the Iraqi government, Kurdish fighters, and “moderate” Syrian rebels).

Obama had compelling domestic-political reasons to portray ISIL in such terms. First, the president boasted a respectable track record when it came to counter-terrorism—his killing of Osama Bin Laden and his muscular policy of drone warfare being just two examples. This meant that Obama could reasonably expect that his audience would be reassured to hear that their president—the self-styled scourge of terrorists the world over—was “taking charge” in a tried and tested manner.

Second, portraying ISIL as a terrorist organization was a subtle way of defining the threat in terms of U.S. national security.  Success against ISIL would mean eliminating the militant group’s capacity to strike U.S. targets, he seemed to be suggesting. The goal was not to restore order and security—let alone democracy—to war-riven Iraq and Syria, but rather to neutralize a discrete group of militants who might harm American interests.

Third, Obama needed a way to prevent ISIL’s growing strength becoming a domestic political issue—that is, a stick with which his adversaries at home could beat him. Obama needed to appear tough enough on ISIL to ward off criticism from Republican hawks while not going so far as to embolden his Democratic supporters who chafed at the very thought of another foreign entanglement.

Promising airstrikes, refusing to commit ground troops, and offering a believable plan to “degrade and ultimately destroy” ISIL appeared to meet these domestic-political objectives. The only problem is that, one year on, the strategy appears to have failed on the ground.  Not only has ISIL not been destroyed, but the group continues to hold vast tracts of territory and possess the military means of waging a brutal war that shows no sign of abatement.

A year ago, Obama was able to point to Yemen as an example of how he expected the mission against ISIL to unfold.  There, U.S. forces were working alongside a friendly government to conduct airstrikes and covert operations against al-Qaeda in the Arabian Peninsula. This provided a model for how terrorist threats to U.S. interests could be managed, Obama insisted.  But Yemen has since descended into outright civil war, with armed groups—including AQAP and its allies—battling it out for control of the country.

It is now clear that however much President Obama might have wished for the crises in Iraq, Syria and Yemen to be matters of pure counter-terrorism, events on the ground have proven otherwise. These are civil wars, all-consuming conflicts in which U.S. policies of counter-terrorism have been rendered obsolete by enemies that look like, act like, and call themselves armies—armies that must be defeated through conventional warfare, not airstrikes alone.

So far, though, Obama can still claim (quietly, of course) to have won on the second front—that is, the home front. For while ISIL has refused to succumb to a strategy of counter-terrorism, that same strategy has succeeded in keeping the Middle East from being a truly major issue in domestic politics. There is plenty of domestic criticism of Obama’s conduct as commander-in-chief, of course, but nothing that has come close to derailing his presidency. This might explain why, as recently as July, Obama still sees advantage in clinging to his description of ISIL as “a terrorist organization, pure and simple.”

The truth is that while ISIL is certainly a terrorist group, it is not just a terrorist group. It does not fight using terrorist tactics alone and it does not affect local populations in the way that a clandestine terrorist organization might. Yet Obama will continue to frame the war in Iraq and Syria in counter-terrorism terms for as long as it serves him domestically to do so; as Colin Dueck persuasively argues, domestic-political priorities almost come first for this president.

A lot has changed in the Middle East over the past year.  Millions of peoples’ lives have been destroyed.  But among the things that have remained constant are ISIL’s murderous activities and U.S. obduracy in relying upon a purely counter-terrorist response. The former is prolonged and made worse by the latter.