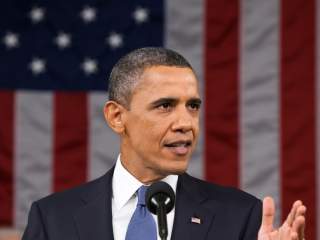 There’s an old saying that necessity is the mother of invention, and President Obama’s State of the Union address before Congress seemed to be an inventive way of dealing with a difficult political necessity—that of hailing the nation he leads in upbeat language at a time when he knows the American people are anything but upbeat.

This was not the usual State of the Union speech. Certainly it lacked, as the president himself noted, the normal laundry list of policy initiatives he might want to press upon Congress and the people. Everyone knows he lacks the political power to get anything through Congress. But, more significantly, the speech lacked two key elements almost always seen in such addresses—first, a narrative of how his policies have brought America to its current state; and, second, an effort to explain and justify those policies in some detail and with political confidence.

True, the president noted what he considered his greatest achievements, such as the Affordable Care Act, the drop in unemployment and the job-creation numbers. But he didn’t exploit this final opportunity of his presidency to elucidate his national legacy with a coherent story line laying out how his policies and initiatives and rhetorical force had created the nation we now live in.

He couldn’t do that because most Americans don’t like the nation they’re living in. So he unloaded upon his constituency a lecture on why they’re wrong in feeling ennui at the state of the union, why they should find felicity in his assurances that the American economy is unsurpassed in the world, that the U.S. military remains the greatest anywhere.

All they need to do, he said, is embrace the change that has been descending upon us. The country has been through such profound change before, and each time there were those “who told us to fear the future. But each time we overcame those fears” and refused, as Lincoln admonished, to “adhere to the dogma of the quiet past.”

In other words, he wants the American people to embrace the change he has been seeking to bring to the country since his inauguration. For Obama, this means European-style democratic socialism. It means greater redistributionist economic policies than the United States has embraced since the Great Society. It means ever-greater regulatory control over the economy and other aspects of life. It means amnesty for illegal immigrants.

It’s difficult to avoid the impression that Obama entered office with grand plans to reshape the American future in ways reminiscent of Franklin Roosevelt or Lyndon Johnson. He wanted to resume the national push, interrupted by Ronald Reagan in the 1980s, toward greater governmental dominance over major aspects of American life. His cap-and-trade energy initiative and his Affordable Care Act were centerpieces in this exalted project.

He failed. Cap-and-trade died in Congress, and the Affordable Care Act has generated ongoing controversy and anger throughout the country—contrary to Democratic expectations that, once passed, it would be embraced and heralded as were FDR’s and LBJ’s bold initiatives. The American people shut him down by giving Congress to the opposition, and he has been reduced since then to operating around the margins with executive orders that sometimes raised questions of constitutional propriety.

The conclusion is inescapable that Obama, early in his presidency, saw himself seven years later, standing before Congress and the American people, issuing a triumphant rendition of his historic tenure and the new direction he had given his country. Perhaps in this phantasy of future glory he saw himself praising his fellow Americans for embracing the change he set before them.

But now it’s seven years later and he can’t do that. There isn’t even any point in checking off any laundry list of initiatives he considers important for the country.

So he gave us his lecture instead. Given the rhetorical necessity he faced, his lecture was rather brilliant in places. It contained impressive elements of effective oratory—optimism, idealism, compassion, occasional eloquence, with sly digs at the opposition wrapped in a kind of bonhomie.

But ultimately he blamed the American people for whatever concerns and fears they’re feeling. A president can only do so much, he said, without the people pulling their weight. Looking into the camera to the folks at home, he said, “It depends on you.” The grand vision he outlined “will only happen when the American people demand it.” By way of bringing the point home, he added that our form of government “is hard; it’s a lot easier to be cynical.”

With his optimism and lyrical portrayal of American glory, he avoided the “malaise” trap that ensnared Jimmy Carter during his presidency back in the 1970s. But he seemed to be saying the American people hadn’t quite lived up to his expectation.

The reverse is also true. Commentator Charles Krauthammer said on Fox that Obama seemed to be trying to change the ideological direction of the country, like Reagan. He might have added Franklin Roosevelt, as well, and the combination of William McKinley and Theodore Roosevelt. But those men changed the national vector not just with rhetoric or ideological expressions. They all created new political coalitions that brought new energy to their party and hence their governance.

That’s what Obama failed to do, at a time when the country needed it with considerable urgency. That’s why he didn’t have a great story to tell the American people. And that’s why he defaulted to a presidential lecture.