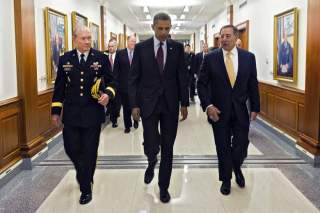 Barack Obama’s presidency was a tumultuous one. Obama was challenged by almost unprecedented domestic difficulties and a deeply divided Congress as well as by increasing global instability and turmoil. He nevertheless retained high personal popularity ratings during most of his two terms. To a significant extent this was due to his superior personal conduct as a political leader and indeed as a husband and father. Obama came across as honorable, trustworthy, reflective and dignified insofar as his years in office were not tainted by any salacious scandals or irresponsible personal behavior. His inclination, however, to surround himself with celebrities, be they intellectuals or entertainers, and his personal self-assuredness if not arrogance were responsible for an air of aloofness and detachment that permeated the Obama White House.

Obama had the sheer good fortune that he was bound to look like a mature and graceful statesman in comparison with his predecessor, the discredited and bungling George W. Bush. He also has the distinction of going down in history as the first non-white president and as someone who did not drag his country into any major new ground wars. Domestically he doggedly stood up to all the hatred and barely concealed racism that he faced throughout his eight years in office. Considering the deeply hostile Congress and the huge global and domestic challenges Obama was faced with, at first sight his presidential record is formidable though perhaps less so when looking at the issues more closely.

Immediately upon coming to office Obama managed to deal successfully with the near meltdown of the American financial system. By means of a major economic stimulus program and the re-capitalization of a number of large banks and financial institutions, his administration and the Federal Reserve prevented the implosion of America’s economy and the country’s banking system. In March 2010 Obama was also able to get a partial health care reform act through a gridlocked Congress. This was a massive success. Although his solution was far from perfect and allowed private insurance companies to retain too much influence, all previous presidents had failed when attempting to introduce something approximating a universal health care system in the United States.

Obama also scored some major foreign policy successes. Still, the balance sheet for his foreign policy is a mixed one as outlined below. Despite some successful initiatives the Obama administration left unresolved many of the crucial foreign policy issues of our times.

It is difficult to discern Obama’s worldview. Some of the best recent indicators are included in Jeffrey Greenberg’s June 2016 article in the Atlantic which is based on a number of long interviews with the president. Initially Obama can be characterized as quite idealistic. In his first year as president he optimistically pronounced his desire to rid the world of all nuclear weapons, believed that a “reset” of U.S. policy with Russia would be quite possible and that perhaps a good democratic government could be installed in Libya after the downfall of Gaddafi. After a few years however Obama became increasingly cynical, realized the domestic and international constraints on his power and soon came to believe in a much more neo-realist conception of America’s role in global affairs. The president certainly moved toward a much more pragmatic approach, preferring to focus on the merely “doable” rather than on the desirable objectives.

Obama shared the long-standing belief of the Washington foreign policy establishment that the United States is the “indispensable” country in global affairs. Obama, like many of his compatriots, views America as the benign hegemon, who, by means of a cooperative multilateral approach and based on the democratic and enlightenment values of the West, is essentially a good and well-meaning power which only uses force and coercion when there is no other option left. Obama, however, stopped viewing the United States as the world’s omnipotent policeman. This, he believed, would overstretch the country’s resources. Even more importantly, in Obama’s view, no country can possibly fulfill such a role with respect to the ever more complex and intricate global problems the world of the twenty-first century is faced with. Consequently, Obama decided to focus U.S. foreign policy on those issues that were absolutely essential for America and the West’s future well-being while sidelining the others. On the whole, though not always, the president managed to stick to his core principle of a limited role for U.S. foreign policy.

1. Ending the wars in Afghanistan and Iraq

During the election campaign of 2008, Obama promised to terminate the country’s involvement in the wars in Iraq and Afghanistan. This was largely achieved by December 2011 and late 2014 respectively though at a high price. A small number of American troops (just under 9 thousand) remain in Afghanistan to date. More importantly, both countries continue to be highly unstable and are increasingly escaping from U.S. and western influence. In Afghanistan, in particular outside Kabul, the Taliban with their austere, fundamentalist pre-modern approach to life essentially are once again the rulers of the land. Iraq is drawn increasingly into the orbit of Iran, which remains one of America’s greatest foes in the region. Iran competes viciously with Saudi Arabia for the predominant role in the region. Despite its brutally conducted bombing raids in Yemen, Riyadh remains one of Washington’s closest allies in the Middle East.

2. “Leading from behind” in the Middle East: Libya and Syria

The president clearly wanted to avoid being drawn into more new wars in the Middle East in particular but also elsewhere, unless going to war was regarded as absolutely crucial for maintaining U.S. national interests, narrowly defined. This resulted in Obama merely “leading from behind,” as one of his advisers expressed it, in the French and British-led effort to get rid of Libyan dictator Gaddafi. This “hands-off” approach led to the absence of any attempt to embark on some serious nation-building efforts once Gaddafi had been toppled in October 2011. Instead the North African country descended into chaos with the West largely watching passively from the sidelines.

The outcome of the western intervention in Libya convinced Obama to take a rather passive role in the brutal and barbaric war in Syria, despite his assurance in August 2012 (Obama’s infamous “red line”) that he would take action if Syrian President Assad used chemical weapons on his own people. Assad’s use of chemical weapons a year later did not lead to U.S. military engagement in Syria but rather to the negotiation between Washington and Moscow of a deal to move all of Assad’s chemical weapons out of the country. While this agreement was largely successfully implemented, the decision not to get militarily involved in Syria remains highly controversial. Although Obama continues to express his firm belief that this was the right policy, many analysts argue that it tarnished American credibility with Russia (and also China) and subsequently emboldened Moscow to get involved in the war in Syria. The president kept expressing his great concern about the Syrian situation, not least the human catastrophe in the region but he refused to get involved in any major way, rejecting, for instance, the establishment of American enforced no-fly zones and safe havens in parts of the country adjacent to Turkey.

3. Fighting international terrorism by other than conventional military means

Another major objective of the Obama administration was the attempt to re-focus on the war against fundamentalist terrorism by different means: terrorism, not least ISIS, was meant to be defeated by enhanced intelligence gathering, intensive drone warfare and the insertion of American advisers to provide some professional military advice to local rebel forces. Obama was adamant that no U.S. forces – no “boots on the ground” – would be committed in Syria or elsewhere. U.S. arms deliveries to rebel forces doing the West’s bidding occurred only reluctantly and within limits. While protesting loudly about Russia’s forceful involvement on the side of the government forces of Syrian president Assad, Obama was careful to exclude the possibility of any direct clash between U.S. and Russian forces.

4. Refocusing U.S. foreign policy on China: the “Pivot” to Asia

Both Obama and his first Secretary of State, Hillary Clinton, were convinced that not the Middle East, including Iraq and Syria, but, above all, Asia and the Pacific region were of the highest relevance for the future of U.S. power, influence and security. Thus with the so-called “Asian pivot,” announced in November 2011, a “rebalancing” of Washington’s foreign policy occurred that takes due account of America’s geopolitical, economic and security interests in the region. By 2020, 60 percent of the U.S. navy may be based in the Pacific. The rise of China motivated this foreign policy shift. It was meant to allow Washington to manage Beijing’s increasingly influential global role. Not least China’s assertive claims on the sea, rocks and islands within the so-called “nine-dash-line,” and thus over 90 percent of the South China Sea, worries the United States and many Southeast Asian nations, some of whom have competing sovereignty claims in the South China Sea. Part of the “pivot to Asia” therefore was Obama’s intensive wooing of a significant number of China’s fourteen neighbors in Asia and his attempt to channel their fears about Beijing’s potential hegemonic role in the region in a pro-American direction. The successfully negotiated 12-nation Trans-Pacific Partnership (TTP) had a similar function. While many Asian countries signed up to the trade deal finalized in October 2015, the United States made sure that China was not among them.