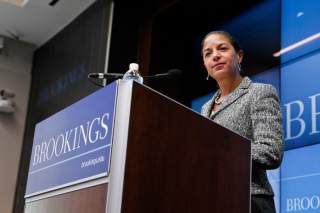 The document includes all the now-standard (and true) language about the indispensable nature of U.S. leadership and how America is a global force for good. But it also asks the right question, one that is now familiar to those who follow administration statements on U.S. strategy: “The question is never whether America should lead, but how we lead.”

The answer, as described in the NSS, tracks very closely to what Robert Wright dubbed “progressive realism” in 2006. Some are already calling it “strategic patience,” a term used in the president’s intro letter but nowhere else in the Strategy itself. But “sustainment” is probably a better term because sustainment does not imply simply trying to wait out threats and challenges but rather building strength and remaining firm in the face of them. Senator Tim Kaine (D-VA) once characterized Obama's approach, which the NSS builds out, as: “defend ourselves unilaterally, and promote our values multilaterally.” The new NSS reflects much of that logic as well.

However it’s categorized, the new NSS focuses heavily on managing strategic risks, noting specifically, “we will prioritize efforts that address the top strategic risks to our interests.” The document shows an administration trying to gain a realistic picture of those risks without overhyping them, and then devoting resources to areas where they can be most effective in mitigating risk. A tough-minded approach to risk assessment should not be construed as a justification for disengagement from the world. The NSS makes an unequivocal case for sustained global engagement, asserting bluntly “our obligations do not end at our borders.”

It goes on to say: “We embrace our responsibilities for underwriting international security because it serves our interests, upholds our commitments to allies and partners, and addresses threats that are truly global.” No precipitous casting aside of global burdens here. Later, responding specifically to assertions that increased U.S. production of oil and gas can insulate America from world affairs, the document calls for “an expanded view of energy security that recognizes the collective needs of the United States, our allies, and trading partners as well as the importance of competitive energy markets.”

In reading this document, many will surely latch on to language about restraint in the use of force – “We will be principled and selective in the use of force”—  to argue that the strategy is overly focused on avoiding military engagements. In doing so, most will ignore language arguing for the utility and necessity of force. Examples include: “The use of force should not be our first choice, but it will sometimes be the necessary choice.” Another section underlines the necessity of “reaffirming our security commitments to allies and partners, investing in their capabilities to withstand coercion, [and] imposing costs on those who threaten their neighbors.”

The NSS also talks about leading in five ways, the most telling being “with a long-term perspective.” This section details what has changed since the last version came out in May 2010. It talks about five major strategic trends: The first is that “power among states is more dynamic,” which is another way of saying that, while the United States might be maintaining or even gaining absolute power, its relative power vis-à-vis the rest of the world is being diluted. Secondly, “power is shifting below and beyond the nation-state.” Thirdly, global economic interdependence and technological change have broadened networks but also created shared vulnerabilities. Fourthly, “a struggle for power is underway among and within many states of the Middle East and North Africa.” And finally, “the global energy market has changed dramatically.”

Following the introduction, a somewhat artificial split between the sections on “security” and “international order” allow for the security section to call out bad behavior without naming names. This approach fits into the NSS’s stated principle that the United States, “eschews orienting our entire foreign policy around a single threat or region.” Instead the security section focuses on national defense, homeland security, counterterrorism, deterrence, WMD, climate change, ensuring access to the global commons and “health security” as broad topics.

This approach allows the NSS to lace in language referring to challenges China poses without calling it out directly. In doing so, the document is able to nest the concerns that apply mainly to China within a wider set of rules and norms. In the section on ensuring access to “shared spaces” (the global commons), for example, the NSS says “access is at risk due to increased competition and provocative behaviors.” It calls out “those who may wish to deny the peaceful use of outer space” and “illegal and aggressive claims to airspace and in the maritime domain.” It goes on to say, “On territorial disputes, particularly in Asia, we denounce coercion and assertive behaviors that threaten escalation.” U.S.-China bilateral relations as such do not get mentioned until the last section on “international order,” which asserts that “we will manage competition [with China] from a position of strength.” That section also says “the security dynamics of the region—including contested maritime territorial claims and a provocative North Korea—risk escalation and conflict.”

Russia gets a more straightforward treatment---no need to dance around delicate sensibilities: “Russia’s aggression in Ukraine makes clear that European security and the international rules and norms against territorial aggression cannot be taken for granted… we will continue to impose significant costs on Russia.” While the section makes a head-nod to possibilities for cooperation in some theoretical future, it reiterates that, “We will deter Russian aggression, remain alert to its strategic capabilities, and help our allies and partners resist Russian coercion over the long term, if necessary.”

The Middle East warrants a more nuanced approach, which tracks with the greater complexity of regional dynamics. Predictably, given the administration’s policies in the region, it says, “Resolving these connected conflicts, and enabling long-term stability in the region, requires more than the use and presence of American military forces.” Ending the conflicts will require partners who can defend themselves and alleviating the underlying causes of the conflicts. These causes include addressing Iran’s nuclear program, ending the Israeli-Palestinian conflict, de-escalating sectarian conflicts, and helping states in transition make political reforms and build state capacity. And when it comes to political change in the region, the NSS says U.S. focus “is on supporting countries that are moving in the right direction.” So, help Tunisia first. Beyond that, while the strategy makes general statements about the long-term fragility of authoritarian regimes, it does not call them out by name or say the United States will curtail relations with them.

Domestic connections to national security appear throughout the NSS and run the gamut of issues, from education to health to financial regulation. Most interestingly, the NSS asserts that political gridlock has strategic effects. It rails against “political dysfunction in Washington that undermines national unity, stifles bipartisan cooperation, and ultimately erodes the perception and strength of our leadership abroad.” The challenge becomes especially important given that the NSS calls for a number of initiatives that require Congressional input, including Trade Promotion Authority for the Trans-Pacific Partnership and the Transatlantic Trade and Investment Partnership; the Comprehensive Test Ban Treaty; the Fissile Material Cutoff Treaty; the UN Convention on the Law of the Sea; and IMF reform.

Winston Churchill famously said “democracy is the worst form of government, except for all the others.” There’s much to criticize in the National Security Strategy’s conception and execution of American foreign policy. But like democracy, its inherent challenges and unpleasant trade-offs do not necessarily mean there is a better strategy out there just waiting to be invented, at least not right now. Until then, this National Security Strategy provides a decent start.

Jacob Stokes is the Bacevich Fellow at the Center for a New American Security, where he works in the Strategy and Statecraft Program. Follow him on Twitter: @jacobstokes.