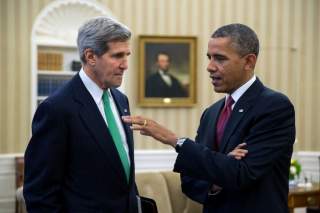 In a speech on February 8, Iran’s Supreme Leader Ayatollah Ali Khamenei threw his support behind nuclear negotiations with the P5+1 group of world powers, and accepted all concessions that Iran has made in the negotiations for limiting its nuclear program.

But Khamenei has also made statements that might cast doubt on his willingness to reach a compromise with the United States.

In the same speech, for example, he stated his opposition to a two-stage agreement with the P5+1, in which the two sides must first agree on a political framework by March 24, and then sign the comprehensive agreement by the end of June.

He has also clearly expressed his distrust of the United States as well as his opposition to restoring relations with the United States. As he put it in a February 18 speech, “even if we accept what they dictate to us on the nuclear issue, their destructive moves and sanctions will not be stopped and lifted. They will continue to create all sorts of problems for us because they are opposed to the essence of the Revolution.” Even the New York Times admitted his skepticism is not unfounded.

However, Khamenei’s statements led many in the West to speculate that he is no longer willing to reach an agreement with P5+1. But is this true?

President Obama appears to be aiming for a grand foreign policy achievement in the last two years of his presidency. He has stated that degrading and ultimately destroying Islamic terrorist groups in Afghanistan, Iraq, Syria, Pakistan, and Yemen is one of his important goals. The terrorists, who have targeted mostly other Muslims, have recently become a potential security threat to the West as well.

The United States needs Iran’s cooperation to confront radical Islamists in the region, at least in Iraq, Syria, Afghanistan, and Yemen. Unfortunately, by invading Iraq and attacking Libya, Washington’s hawks only increased the power of Tehran’s hawks, who are opposed to any rapprochement between the two countries. However, a nuclear deal would neutralize these Iranian hardliners, which would bode well not only for the two countries, but also for the entire Middle East.

The United States has gradually recognized this. General Martin Dempsey, Chairman of Joint Chiefs of Staff, recently acknowledged Iran's positive role in combatting terrorist groups in Iraq. The apparent cooperation between Iran and the United States against the Islamist State is an unwritten agreement, the result of the common interests of the two countries.

Contrary to the beliefs of anti-Iranian elements in the West, Khamenei is willing to accept any reasonable conditions suggested by the United States, including more intrusive inspection of Iran’s nuclear facilities to guarantee their peaceful nature. In exchange, they want all economic sanctions imposed on Iran to be lifted.

In other words, Iran is willing to accept tougher conditions than are required by the Nuclear Non-Proliferation Treaty (NPT), if the United States is willing to lift  sanctions.

The problem is that the United States wants to lift sanctions gradually over the course of at least a decade or longer. Lifting sanctions is also not totally up to the American president. Permanently removing most of the sanctions requires Congressional approval, and that body has shown no inclination to do so.

In fact, Congressional opposition to lifting sanctions has become so loud that British Prime Minister David Cameron has felt the need to personally appeal to Congress to not obstruct an agreement with Iran.

But if the Obama administration is not able to lift all the sanctions, and can only suspend them, Iran would have to wait a decade to be free from all sanctions. This is not acceptable to Tehran, unless it is offered some other tangible concessions in return. There are, however, two main obstacles.

Lobbying against the agreement

One main obstacle is Israel and its lobby in Congress. To make their point, Israeli leaders have spoken absurdly about Iran’s intentions. Former Israeli Prime Minister Ehud Barak even suggested that Iran has been waiting four thousand years to achieve the power and prestige that comes with nuclear technology and weapons.

The lobby is so powerful that in a recent trip to Israel, Senator Lindsey Graham (R-SC) told Prime Minister Benjamin Netanyahu that the U.S. Congress would “follow his lead” on Iran. Meanwhile, Speaker of the House John Boehner brought Netanyahu to Washington to rebut President Obama in a speech to a joint meeting of Congress. As the Israeli prime minister’s speech made clear, Netanyahu wants war with Iran, not peace and compromise.

The second obstacle to a nuclear deal is the Arab lobby, particularly the Persian Gulf states. Led by Saudi Arabia, these countries are all opposed to the United States restoring relations with Iran, which they fear will marginalize them. Indeed, after recently visiting the region, Senator Graham stated that Saudi Arabia is flooding international markets with cheap oil to defeat Iran through economic pressure.

Fortunately, President Obama has demonstrated resolve. He recently said that “Congress should be aware that if this diplomatic solution fails, then the risk and likelihood that this ends up being, at some point, a military confrontation is heightened. And Congress will have to own that as well."

Transforming the relationship between Iran and the United States

Obama is striving for a higher goal. While the negotiations are strictly over Iran’s nuclear program, transforming the broader U.S.-Iranian relationship to one based on mutual interests and respect seems to be the president’s most important foreign policy goal.

The fact is that Israel, the Arab countries, Turkey, Russia, and China have all benefited immensely from the animosity between Iran and the United States, leaving the two nations as the only losers. Undoubtedly, a strong and friendly Iran will be an asset for the United States in the region, as an ally that accepts the huge responsibility of fighting Islamist terrorists in the region, and uses its influence to promote peace and security in Iraq, Syria, Yemen, Bahrain, Pakistan, Afghanistan, Lebanon, and Palestine.

President Rouhani, former Presidents Akbar Hashemi Rafsanjani and Mohammad Khatami, the Iranian Reformists, and the Green Movement all support restoring ties with the United States. This would not only be considered Obama's greatest foreign policy achievement, but Rouhani’s as well, as the latter could rightly declare that he finally resolved a decades-long foreign policy headache for Iran.

Can the Ayatollah's pessimism prevent a restoration of the diplomatic relations?

Khamenei’s distrust of the United States will not necessarily prevent the two sides from restoring ties. In fact, a face-saving agreement can help change Khamenei’s view. Attitudes are already shifting in Iran: during the 1979 Islamic Revolution, residing in the United States or having a Green Card were considered political offenses. But now, Foreign Minister Mohammad Javad Zarif and Secretary of State John Kerry routinely meet, walk together in Geneva, exchange pleasantries, and address each other by their first names.

For President Obama to achieve his strategic goal of transforming U.S.-Iranian relations, he must first convince Khamenei of America’s sincerity. The only way to do this is to get the economic sanctions lifted as quickly as possible in exchange for tight and verifiable limits on Iran’s nuclear program. Intrusive inspections of the program are a major component of keeping it under tight control, which can be achieved by Iran implementing the NPT’s Additional Protocol.

On the other hand, Congress must recognize that Iran also has hawks who control Parliament and many other power centers. Iran’s hardliners will do everything in their power to prevent Iran from ratifying the Additional Protocol if Congress refuses to take meaningful steps toward lifting economic sanctions. Iran’s hawks have been protesting loudly that the Rouhani administration has made too many concessions, while not receiving anything tangible in return.

In a speech on February 2, for example former President Mahmoud Ahmadinejad said, “if you [Rouhani] do not have the backbone to resist the United States, why did you accept such [high] responsibilities? Take care of your own personal affairs [and leave diplomacy to the hardliners].”

Lifting sanctions will assure Khamenei that a real change has taken place in Washington. This will lead to a positive change in Tehran. But, if current opportunity for ending enmity between the two nations is squandered, it will not soon arise again.

Undoubtedly, the issue of normalizing relations between the United States and Iran is very complicated. Even though both governments are strongly determined to move towards normalization, it would take years for such a process to reach full fruition. However, it must start at some point, and now is the best time for a fresh beginning.

President Obama learned from the the United States’ experience of reestablishing relations with China and Vietnam, and has recently announced that America will normalize relations with Cuba. Reaching an agreement with Iran would be a historic achievement for the president. Even if Congress fights him tooth and nail on it, Obama must not allow this opportunity to be wasted.